Accessibility links
Here Comes The Judge: A New Prescription For Medical Malpractice : Shots - Health News One approach tried in New York that expedites settlements in medical malpractice cases is expanding, and many policy experts and participants in the process believe it has promise.

Here Comes The Judge: A New Prescription For Medical Malpractice

Here Comes The Judge: A New Prescription For Medical Malpractice

The medical malpractice system is considered broken by many providers and politicians, a cause of runaway healthcare spending and an open door for plaintiffs to pursue frivolous lawsuits in the hope of a hefty payday. 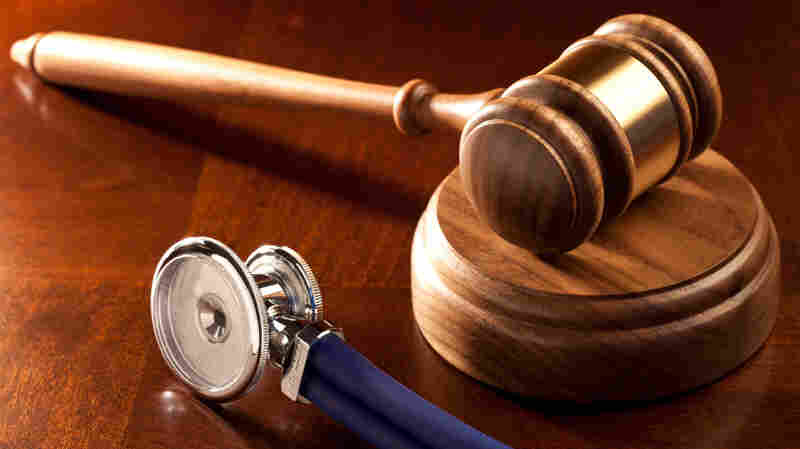 The reality, of course, is more complicated than that. A recent study published in the New England Journal of Medicine examining malpractice claims between 1991 and 2005 found that 78 percent of them didn't result in a payment to the patient.

Each year, physicians faced a 7.4 percent likelihood of facing a claim, but only 1.6 percent of claims received a payment, either through a settlement or jury award. Nonetheless, defending and insuring against these claims is costly for doctors.

There have been a variety of ideas about how best to reduce malpractice claims. One approach tried in New York that expedites settlements in medical malpractice cases is expanding, and many policy experts and participants in the process believe it has promise.

The intervention relies on judge-directed negotiation from the very beginning of malpractice case to help encourage resolution. Judge Douglas E. McKeon of the Supreme Court of Bronx County, who pioneered the program several years ago, says it can be useful for resolving many types of malpractice cases, including the "classic obstetrical case," which is in his experience "the biggest driver of malpractice costs."

The NEJM study looked at figures nationwide, examining which physician specialties had the greatest likelihood of being sued annually and the amounts of the awards. Neurosurgeons faced the biggest risk, with 19.1 percent facing a malpractice claim each year, followed by thoracic-cardiovascular surgeons (18.9%) and general surgeons (15.3%).

Of the 25 specialties studied, obstetricians were in seventh place among those most likely to be sued, with a little more than 10 percent facing claims annually. Psychiatrists, pediatricians and family physicians were the least likely to face a claim.

Payout amounts didn't necessarily correlate with the risk of facing a malpractice claim. The average payout was $274,887 across all specialties. Pediatricians, however, had the highest average payouts at $520,923. Obstetricians had the distinction of accounting for the most awards that topped $1 million, however. Of 66 such awards, obstetricians accounted for 11 of them.