Accessibility links
Does Milwaukee's Campaign Against Sleeping With Babies Go Too Far? : Shots - Health News Eleven babies have died while sleeping next to adults this year in Milwaukee. The city's health department has started an anti-bed-sharing campaign aimed at preventing more infant deaths, but critics say the grim images demonize parents rather than educating them. 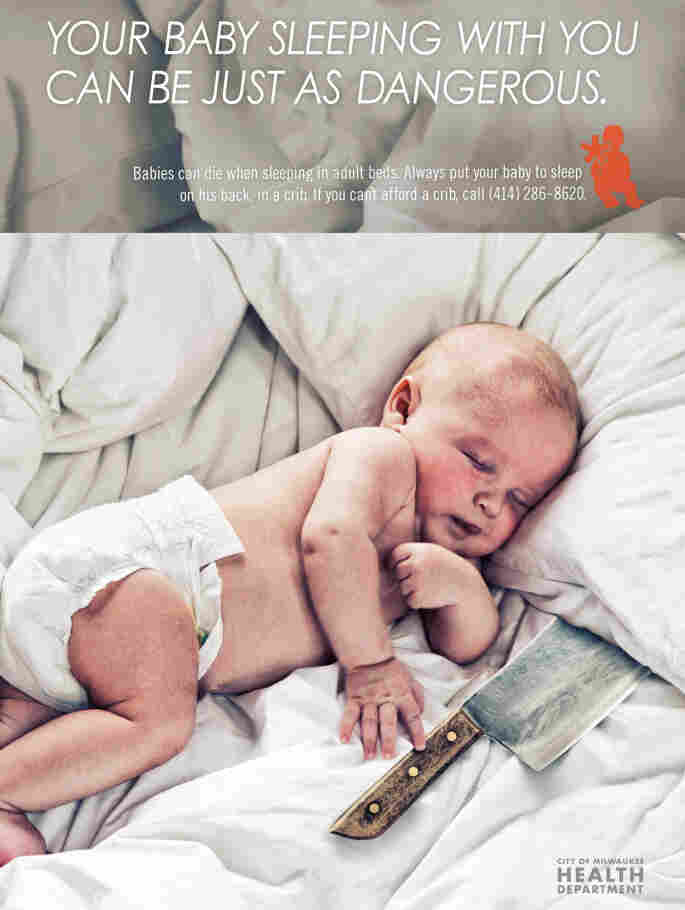 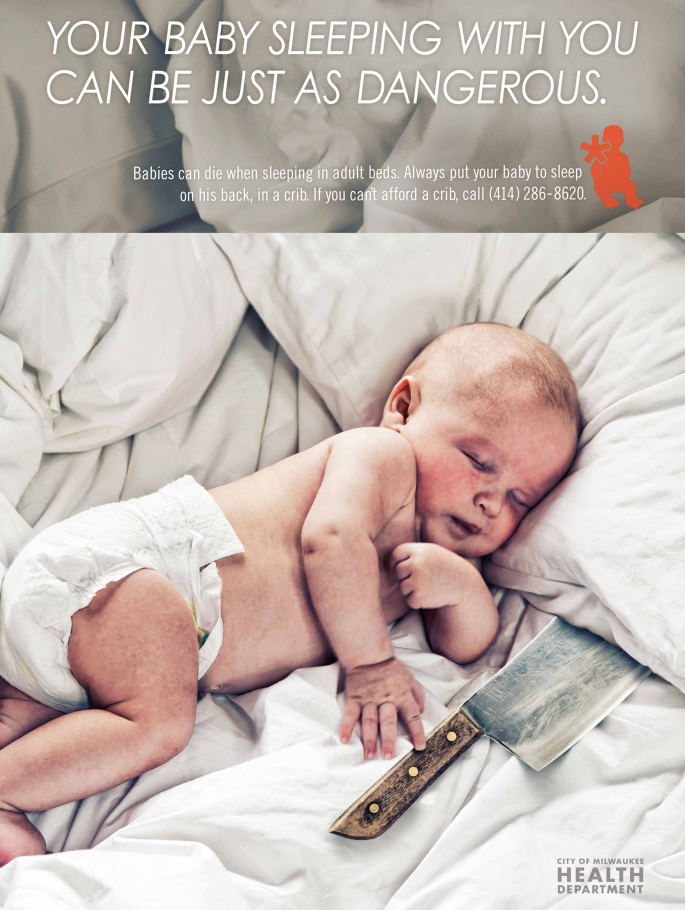 Babies sleeping with their parents risk death, according to an ad campaign by the Milwaukee Health Department.

Courtesy of the Milwaukee Health Department

Three infants have died in the past three weeks in Milwaukee because they were sleeping in the same bed as adults, according to officials.

The deaths come on the heels of an aggressive and controversial ad campaign designed to get parents to place their babies in cribs to sleep. Ads on bus shelters in the city show startling images of babies sleeping face down in adult beds next to what's best described as a meat cleaver.

"We entered into this with the understanding that we had a guerrilla tactic here, and it might make some uncomfortable," Milwaukee Health Commissioner Bevan Baker says of the campaign.

The ads are controversial, he says, but he hopes the message is clear: Bed sharing with babies just isn't safe.

Milwaukee's health department is hoping the message helps reverse a statistic it's not proud of: About 5 white babies die for every 1,000 born, compared with nearly 9 Hispanic infants and about 14 African-American babies.

Baker says there are a number of reasons for such a disparity. "It may be access to health care, prenatal care, supportive housing, transportation, unemployment, environmental concerns," he says.

But still, so far this year, 11 babies have died while sleeping next to adults, which is one form of co-sleeping (the term also applies to babies who sleep in the same room with adults). Baker argues that stopping parents from bed sharing could reduce the infant mortality rate by 15 to 20 percent.

But not everyone agrees that bed sharing is a bad thing. Jessica Piorier and her boyfriend have slept with their 9-month-old son, Oscar, since he was born. "We have a crib," she says. "He's never slept in it, but we put one on the registry, even though we intended to co-sleep before he was even born."

She says they knew they wanted their son close for nursing purposes and just for peace of mind. For safety, they recently installed rails on the side of their bed to prevent their son from rolling off. If either she or her boyfriend has been drinking, they sleep on the couch.

For them, bed sharing is the way to go. And Piorier says she's encountering more parents who sleep with their babies.

When other mothers asked Piorier about her son's sleeping and nursing habits, she says she would tell them that he's nursing great and that he's sleeping well. Then she'd lean in and whisper, "but we're co-sleeping." She says the other mothers would say, "Oh my gosh. We do, too."

"It was like this secret that we had that we thought made us bad parents," she says. Piorier takes issue with Milwaukee's aggressive campaign because it suggests that people who bed share are careless.

Educating parents about bed sharing would be a better way to tackle the problem, says James McKenna, director of the Mother Baby Behavioral Sleep Lab at Notre Dame.

"The mother and baby are arranged differently in the bed when they breast-feed," he says. "They're more sensitized to each other's behavior and physiology and they sleep lighter. That all together makes it safer."

McKenna criticizes Milwaukee officials for demonizing parents who bed share with infants. But Baker says that breast-feeding or not, bed sharing is dangerous. He also says he's fine with being portrayed as the villain in this fight. His department has set a goal of reducing the infant mortality rate by at least 10 percent over the next five years.

And he thinks that putting infants to sleep in a crib is a good place to start.