Accessibility links
Obama Embraces 'End of AIDS,' Promises To Accelerate HIV Treatment : Shots - Health News Many activists praised President Obama's plans to expand U.S. efforts to fight AIDS at home and abroad. The announcement comes at a time when experts and activists believe that the goal of an "AIDS-free generation" may be achievable. 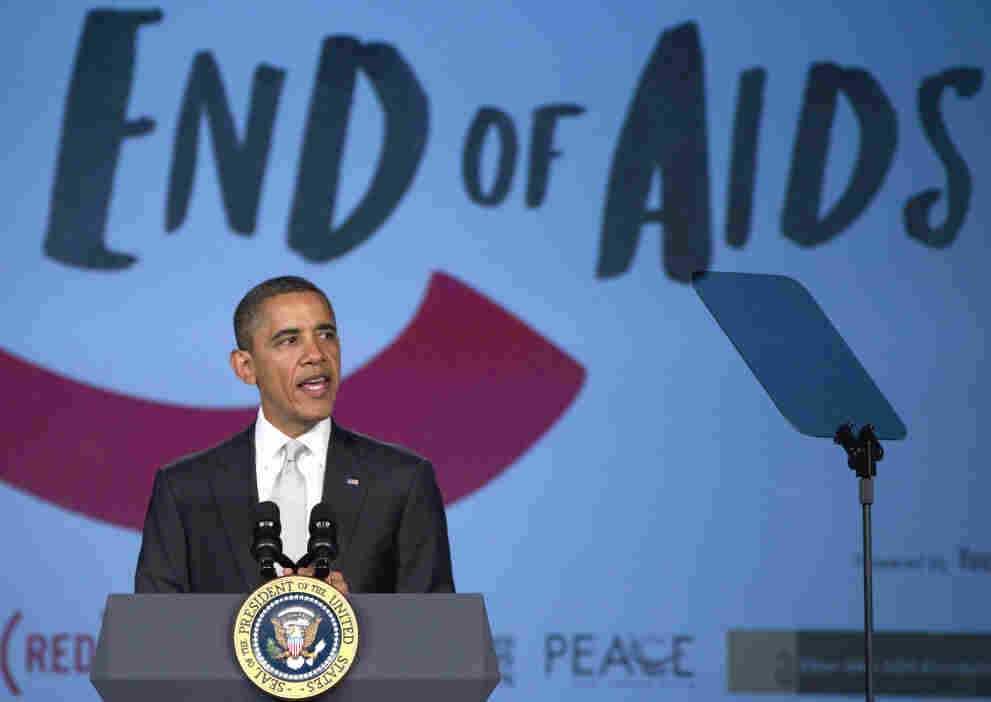 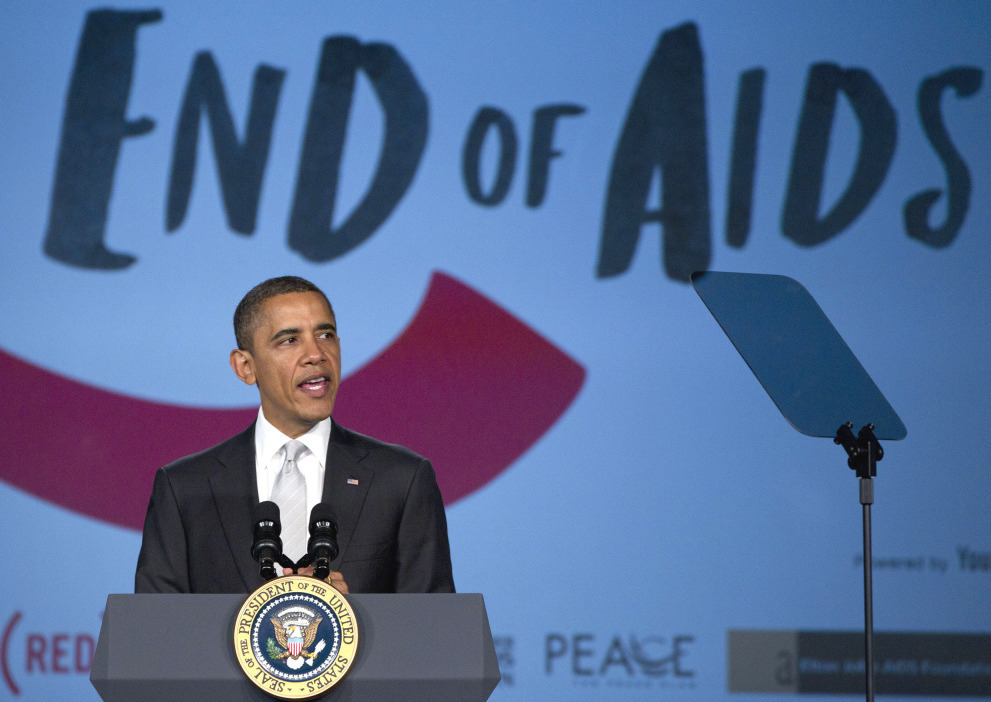 AIDS activists haven't always been happy with Barack Obama. But many of them were on this Worlds AIDS Day.

The president used the occasion to pledge a 50 percent increase in the number of HIV-infected people getting treatment through the President's Emergency Plan for AIDS Relief, or PEPFAR — from around 4 million now to 6 million by the end of 2013.

And he wants to get antiviral drugs to 1.5 million more HIV-positive pregnant women in developing nations so they won't pass the virus on to their newborns.

It's a step toward "an AIDS-free generation," a goal that AIDS experts and advocates think may actually be achievable because of recent studies showing that treating HIV-infected people early in the course of their disease can drastically reduce the risk they'll pass it on to others.

That, plus other preventive strategies, such as male circumcision and condom use, has convinced many public health experts that the world could begin to see the end of AIDS.

"Few could have imagined that we'd be talking about the real possibility of an AIDS-free generation," Obama said at a World AIDS Day event at George Washington University that included, by teleconference, former Presidents George W. Bush and Bill Clinton. "But that's what we're talking about. That's why we're here."

In this country — where, Obama noted, the rate of HIV infection has leveled off — the president announced another $50 million in funding for Ryan White Care clinics and AIDS drug assistance programs. Among other things, that will cut waiting lists for antiviral drug assistance in half, from the current 6,500 patients.

All this new treatment, supposedly, can happen without new money.

The administration plans to drawn on already-appropriated funds for domestic AIDS increases, bypassing congressional approval. The PEPFAR expansion is supposed to happen through lowered drug costs (currently $335 per patient per year, down from $1,100 previously), redirecting money from ineffective AIDS prevention programs, and squeezing other economies out of the PEPFAR budget.

The president's new target of 6 million people on U.S.-funded treatment within the next two years brought cheers from the crowd who heard his speech.

"This speech is a historic opportunity for AIDS activists, for people with AIDS," said Jennifer Flynn of HealthGAP, a group that has been harshly critical of the Obama administration's stance on AIDS. "It's certainly a historic moment in U.S. policy."

But not everyone was ready to applaud whole-heartedly. Economist Jeffrey Sachs, of Columbia University's Earth Institute, is skeptical.

"I'm happy with these targets," Sachs told Shots. "They are absolutely achievable. But the idea that this is going to be done only by cost-saving is typically a dubious proposition."

Sachs was disappointed that Obama didn't launch a campaign to rescue the Global Fund to Fight AIDS, Tuberculosis and Malaria, the world's largest source of AIDS funding. "It's the crucial institution internationally in the fight against AIDS," Sachs says.

Last week, the Global Fund's board cancelled next year's round of new grants for lack of funds.

"I was hoping that he'd be able to announce that last week's decision was an erroneous one," Sach says. "But I didn't hear that."

In its latest appeal for funds, the Global Fund raised only about half of the $20 billion it says it needs. It has just $4 billion in the bank, only enough to keep current grants going, not fund new ones.

Not only have some donor nations failed to fulfill their commitments, but Global Fund board members are worried that pledges may fall short in the future — including the United States' commitment.

"Congress needs to fully fund the president's request for the Global Fund this year and next," Global Fund board member Joanne Carter told Shots.

Carter, executive director of a Washington-based group called RESULTS, notes that Obama asked for $1.3 billion for the coming year's contribution to the Global Fund, but Congress is on track to provide $1 billion or less.

In his speech, Obama called on donor nations to "give the money they promised," and pressed others that haven't pledged to step up. He pointedly mentioned "China and other major economics that are now able to step up as major donors."

Chinese Premier Wen Jiabao, in his Worlds AIDS speech in Beijing, pledged to use domestic funds to plug the HIV funding gap the Global Fund leaves. "We will rely on our own efforts," he said.

But Wen did not promise to become a Global Fund donor.