Accessibility links
Shape Up, America, Before It's Too Late : Shots - Health News Americans are healthier today than they were 20 years ago. But increases in obesity and diabetes threaten to overwhelm the progress we've made on smoking, violent crime and deaths from heart disease and strokes.

Shape Up, America, Before It's Too Late

Shape Up, America, Before It's Too Late

Mississippi ranked last in the latest look at health status in America. This video explores the factors behind the high prevalence of obesity in the state.

You might find it hard to believe, but we Americans are, by and large, in better health today than we were 20 years ago.

But there's a problem brewing, according to the 22nd edition of the annual checkup known as America's Health Rankings. Increases in obesity and diabetes threaten to overwhelm the progress we've made on smoking, violent crime and deaths from heart disease and stroke over the past couple of decades. 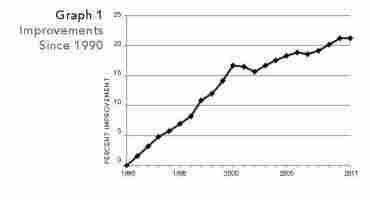 Diabetes is up a lot, too. And that's no surprise, really, when you consider that being overweight raises the risk for developing Type 2 diabetes. About 8.7 percent of adults in U.S. had diabetes in 2010, according to the latest report. In 1996, the prevalence among adults was 4.4 percent.

Forget the specific numbers and look instead at the small graph (left) reproduced from page 18 of the report. Improvements in health are plateauing, and they could be undone if we're not careful.

"We are failing miserably at stemming the tide" of preventable disease, says Dr. Reed Tuckson, a member of the board for the UnitedHealth Foundation, which is behind the annual report.

The rankings draw on government health data as well as information from the American Medical Association, the Dartmouth Atlas Project and the Trust for America's Health.

Tuckson, who's also chief of medical affairs for the insurer UnitedHealth Group, tells Shots there's plenty of room left to improve health. "We have not maxed out on our biological potential." The graph that shows a slowing of improvement illustrates "stagnation" not a "topping out," he says.

The report has plenty of suggestions for how things could be made better, such as working harder to reduce smoking rates. And you can see how individual states fare. Vermont is healthiest. And Mississippi ranks last.