Accessibility links
Road Rage: More Than Bad Traffic? : Shots - Health News It's not unusual for awful traffic conditions or incompetent driving to make some people really angry behind the wheel. But researchers say there may be a biological component to road rage — one that can be tempered with medication and, yes, time outs. 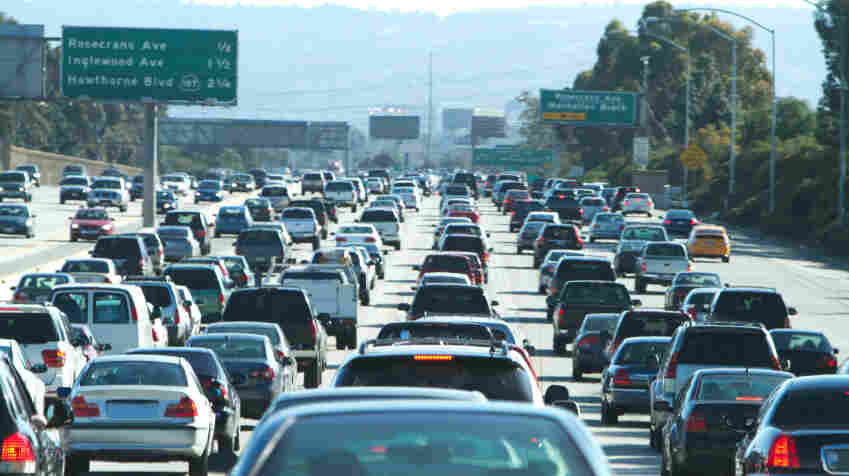 It's not unusual for awful traffic conditions or incompetent driving to make some people really angry behind the wheel. But when enraged drivers actually lash out at others on the road, that's road rage — and experts say it can be a sign of deeper emotional problems.

The term road rage was coined in Los Angeles – a city long known for its epic freeway jams. Mike Shen got a taste of how bad it can get shortly after moving to L,A., when a woman viciously tailgated him on the freeway.

"She got so angry that she started pacing me to my right," Shen says. "She wasn't looking at the road, she was literally yelling — out the window — racial epithets at the top of her lungs."

So Shen decided to take his road rage digital, starting the blog LA Can't Drive, where he and others vent about the disastrous driving they've seen. Often, it's distracted driving that's to blame – people eating, applying makeup or even shaving behind the wheel. Shen recalls seeing one driver reading the newspaper while merging onto the freeway. "Literally in my rearview mirror, I didn't see the person's face," he says — only the spread out newspaper.

In fact, surveys show that the more drivers are distracted, the more other drivers get angry and start honking, cursing, making obscene gestures and waving their fists in the air.

In its annual survey, the road club AutoVantage asks members about bad driving: Did they curse at another driver? Make an obscene gesture? Wave their fist in anger? Purposely slammed your vehicle into another car?

"Oddly," says AutoVantage official Michael Bush says, "in Washington, D.C., you're four times more likely to have somebody drive into you on purpose than anywhere else on the planet."

Clearly, ramming into someone else on purpose is an extreme version of road rage. But this type of outburst is exactly what might signal a deeper underlying problem, says psychiatrist Emil Coccaro at the University of Chicago.

Oddly, in Washington, D.C., you're four times more likely to have somebody drive into you on purpose than anywhere else on the planet.

It's called Intermittent Explosive Disorder, and it can affect as much as 6 percent of the population, says Coccaro. It doesn't just happen on the road but at home, on the job, even when out with friends.

"Those outbursts can be temper tantrums, throwing things around, breaking things, pushing, shoving, hitting people," he says. They can be caused by any number of underlying problems, Coccaro says – for example, paranoia.

"Their fuse for exploding is very, very short," says Coccaro, "so if something happens that they're not happy with, there's not much time for them to think of other ways to handle their reaction to it."

Their fuse is short for a number of biological reasons. For starters, he says, people don't produce enough of the "happy" hormone, serotonin, which is thought to be a behavior inhibitor. "It's basically the brakes," he says, "and if your brakes are bad, you're going to get into trouble."

At the same time, people produce too many of other brain chemicals that promote aggression — a "dangerous combination," says Coccaro, but one that can be treated.

Medications like antidepressants and mood stabilizers can help to restore the brain's chemical balance. Cognitive behavior therapy helps patients not take things personally, and coping techniques like a time out — just leaving the scene — can make a difference, says Coccaro.

Of course, if you're driving in your car, you can't just leave the scene. But you can stop engaging in the aggressive behavior.

These techniques won't completely "cure" the disorder, but they can certainly help contain the explosions.