Accessibility links
Say 'Aah' And Get Your Diabetes Test : Shots - Health News Millions of Americans who don't go to a primary care doctor often see a dentist regularly. If dentists added some simple health screening tests to their checkups of your teeth, it could help catch problems sooner.

Say 'Aah' And Get Your Diabetes Test

Say 'Aah' And Get Your Diabetes Test 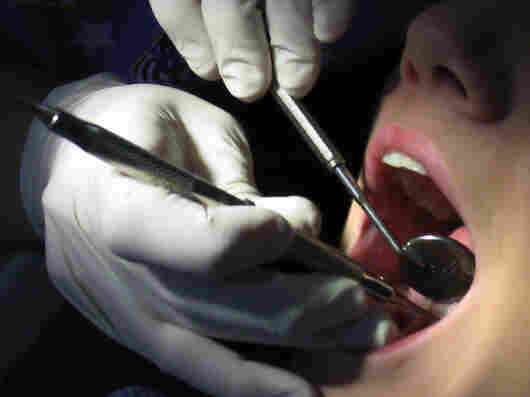 While I've got you here, how about that diabetes test? iStockphoto.com hide caption

Each year, one-quarter of adults don't see a primary care doctor, so odds are they're not being checked for high blood pressure, diabetes and other major health risks. That's 55 million people who are missing out.

But a lot of them — around 13 million — do go to the dentist. So what if the dentist could screen them instead?

That's the fond wish of Shiela Strauss, an associate professor at the New York University College of Nursing. "Dentists are not primary care providers, but they are important health care provider," she told Shots. She became fascinated by the notion a few years ago, when she became aware of the high correlation between gum disease and diabetes.

"I knew that by doing this screening in periodontal patients, we would likely be identifying quite a number of people in with prediabetes and diabetes."

That's no small task; about 8.7 percent of adults in the U.S. had diabetes in 2010, according to America's Health Rankings. And more than one-third are prediabetic. And many of those people don't know it.

That's where Strauss's brainstorm fits in. To come up with these numbers on people who might benefit from health screening at the dentist's office, she sifted through federal health data. Her results are published in the current American Journal of Public Health.

She imagines a dental hygienist giving patients a simple pencil and paper quiz when they come in, similar to the online risk test from the American Diabetes Association. "The dental hygienist can just look at the responses and say to the patient, 'It looks like it would be helpful to visit your primary care provider.' "

If that works, she envisions expanding screening to include blood pressure, cholesterol tests and other vital but often-missed tests.

But dentists might not be quite ready to step up. For one thing, there's no model for paying for the screening, through many of the people in Strauss's data did have health insurance. And when she did a project last summer that recruited dentists for medical screening, the dentists had "truly mixed feelings about it."

But in Sweden, she says, dentists who have included health screening in their practices have seen their practices grow. And she hopes that if American patients felt their dentist was looking out for more than just their teeth and gums, that could be good for the dentist, too.