Accessibility links
For Black Girls, Lack Of Exercise Heightens Obesity Risk : Shots - Health News About half of African-American women in the U.S. are obese, compared to 30 percent of white women. Black women not only carry more weight, but they start piling on extra pounds years before their white counterparts. Around age 8 or 9, girls become less active, and the decline is steepest for black girls. 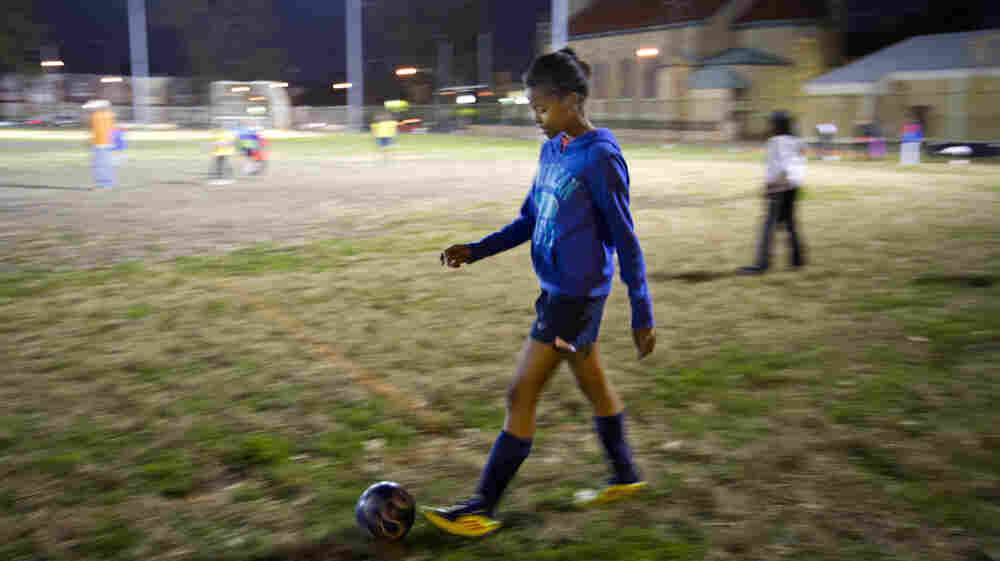 Alexandria Johnson got involved with the Anderson Monarchs soccer team when her mother was looking for an affordable way to keep her active. Todd Vachon/WHYY hide caption 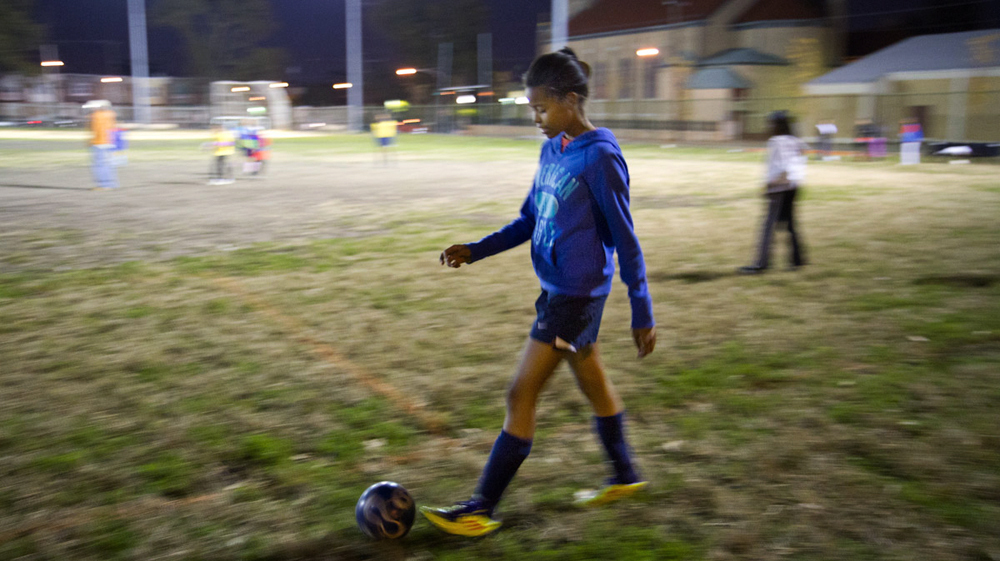 Alexandria Johnson got involved with the Anderson Monarchs soccer team when her mother was looking for an affordable way to keep her active.

The evidence of America's obesity epidemic is all around us. But the problem is particularly acute among African-American women.

About half of African-American women in the U.S. are obese, compared to 30 percent of white women. Black women not only carry more weight, but they start piling on extra pounds years before their white counterparts.

So when does it begin, this excess and unhealthful weight? Research suggests the problem starts early, and it may have a lot to do with when girls give up regular exercise.

Doctors and public health specialists want kids to exercise at least 60 minutes every day, but among all children, black girls are most likely to report they got no physical activity in the past week. A lack of access to exercise opportunities may be one big reason why, says Shiriki Kumanyika, an epidemiologist and public health professor at the University of Pennsylvania.

"If you kind of add up those situations in urban, inner-city neighborhoods — where most African-Americans live — they are not as available. That's been documented," says Kumanyika, who studies patterns of illness and health behavior.

But research suggests that even those girls who do engage in sports and other forms of regular physical activity tend to abandon it in their teen years — and that's true not just for urban girls or black girls, but all girls.

A National Institutes of Health study that followed girls for 10 years, beginning at age 8 or 9, found that, over time, their leisure-time physical activity declined dramatically. That drop-off was steepest for African-American girls.

"What they found was that by the age of 17 — so that's the junior, senior year of high school — more than half of black girls, and nearly a third of white girls were reporting no leisure time physical activity at all," says Temple University researcher Clare Lenhart says.

There are lots of reasons why teen girls drop exercise from their lives, says Lenhart: "They have found changes in enjoyment of activities, in peer support or social support for physical activity. They found a lot of competing interests — be it part-time jobs or caring for younger siblings or other family members."

"Eighth grade — that's where it gets to be difficult," he says. "They are making the transition from young kids to more teenagers, and they are more interested in boys and what boys think."

Jennifer Johnson was determined not to let that happen to her daughter, Alexandria. Johnson discovered the Monarchs when she was looking for an affordable way to keep Alexandria active.

Alexandria is now 15 and an assistant coach with the team, but her interest in soccer dipped in middle school, around age 12, says Johnson.

"In come the friends, and in come the extracurricular activities at school, and as a parent you really have to press on. I said to her, 'If it's not this, you will be involved in something,' " Johnson says.

So Alexandria stuck with soccer, and so did her mother. Johnson is on the sidelines at games and during most practices.

That's an approach that obesity researchers would approve of. Researchers say that family support — especially mom's presence — may motivate girls to keep playing.

This story by Taunya English is part of a reporting partnership that includes WHYY, NPR and Kaiser Health News.