Accessibility links
Patients Want To Read Doctors' Notes, But Many Doctors Balk : Shots - Health News Patients have the legal right to see their doctor's notes, but actually getting them can be slow and expensive. Two new surveys say patients overwhelmingly want to read the notes. But doctors are much more dubious about the benefits of giving patients a window into their thoughts. 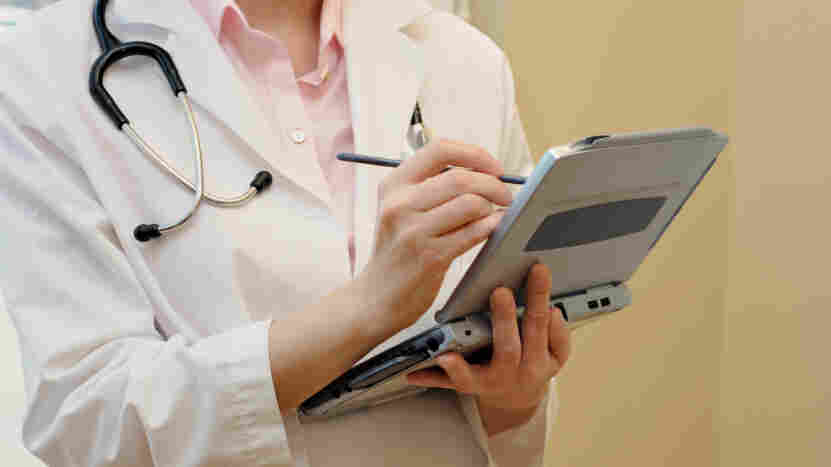 Wouldn't you love to know what she's jotting down? Of course you would. iStockphoto.com hide caption 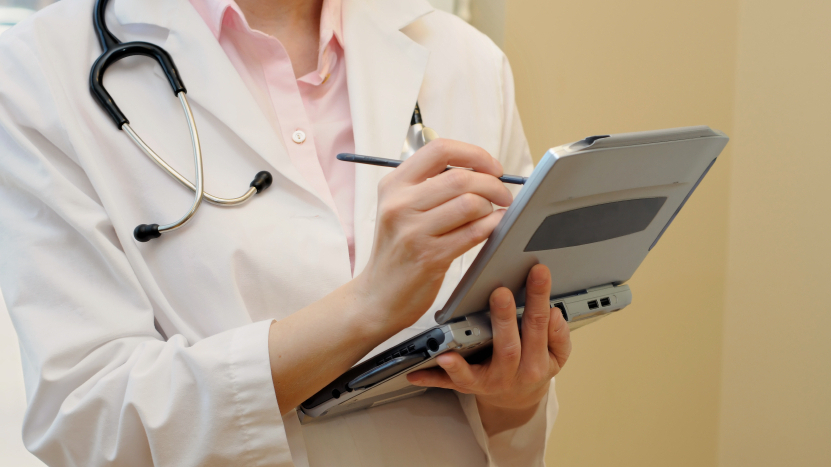 Wouldn't you love to know what she's jotting down? Of course you would.

Doctors write about their patients all the time, in notes detailing office visits and treatments. But for patients, those notes are a closed book.

Maybe the doctor has scribbled that the patient was "difficult," as Elaine discovered when she peeked at her chart in a memorable Seinfeld episode. When her dermatologist saw her snooping, he grabbed the chart out of her hands.

Well, patients seem ready to take that risk. When asked if they'd like to see their doctors' notes, patients in two new studies overwhelmingly say yes. But doctors aren't nearly as enthusiastic.

The idea of opening up doctor's notes has been around for decades. Advocates figure that patient oversight will reduce medical errors and help patients be more engaged. Patients have a legal right to see their records. But actually getting those notes can be expensive and slow.

Doctors and hospitals can charge whatever they want for photocopying, and can take up to two months to deliver. (Patient advocate Regina Holliday was charged 73 cents a page when she asked for copies of her husband's chart when he was dying of cancer.)

Now that doctors and hospitals are using electronic medical records, however, the process of sharing should be relatively cheap and convenient. These two surveys asked doctors and patients if they are ready to make that leap.

The first survey asked 18,741 patients of the Department of Veterans Affairs health system if they'd like to share their online personal health record with family members or other doctors. Seventy-nine percent said they would. The patients were almost all men over age 50. Many were in poor health. (Some personal health records include doctor's notes; many do not.)

But it's the second survey that really gets at the conflict over control of the medical record. It's a poll taken at the very start of OpenNotes, a yearlong experiment that aimed to measure benefits and problems when doctors let patients read their notes. (OpenNotes is funded by the Robert Wood Johnson Foundation, which also is an underwriter of NPR.) Both studies were published in the Annals of Internal Medicine.

The patients overwhelming thought that open visit notes were a great idea. They said it would give them more control and be better prepared for appointments. They also said it would help them do a better job following doctors' orders. More than 37,000 patients took part in the survey, and 92 to 97 percent endorsed access. That's a lot of enthusiasm.

One notable survey participant is "e-Patient Dave" DeBronkart, who became a passionate advocate for open access after being treated for cancer. "My view is, of course I should be able to see my records: whose data is it, anyway?" DeBronkart wrote at the start of the study in June 2010.

The doctors, however, aren't so sure. Most thought the patients would be more confused and worried if they saw their notes. The doctors also thought they'd have to work more as a result.

About one-third of the 173 doctors polled decided not to take part in the OpenNotes project. For them, the prospect of patients peering over their shoulders meant they would have to be less candid, particularly when writing about such touchy subjects as cancer, obesity, substance abuse and mental health. And unlike the doctors who signed on to the experiment, they didn't think all this hassle would make patient care better or safer.

So, will open notes be a big headache with no real benefit, or a way for patients to finally have a window into their doctors' thinking? The data from OpenNotes is due to be released next year and it should help shed some light.

But for now, here's a clue. In May 2009, the University of Texas M.D. Anderson Cancer Center started letting patients read their electronic medical records online. More than 84 percent of current patients have looked at their records. Referring physicians are using them, too. The two most common requests they make are that doctors fix something written down incorrectly, and for how best to translate medical jargon.

"As a result, they are more informed about their care plan and diagnostic results and ask smarter, more focused questions," Thomas Feeley, vice president of medical operations at M.D. Anderson, and Kenneth Shine, executive vice chancellor for health affairs at the University of Texas system, wrote in an accompanying editorial in Annals. And yes, the doctors do complain about the time it takes to explain what they wrote. But all and all, they're happy with it.