Accessibility links
For Hospitals, There's No App For Adopting Tablet Computers : Shots - Health News Hospitals may be the only places in America that aren't crazy for iPads. Security issues and incompatibility with hospital systems are two big reasons why tablet computers haven't caught on. But some doctors and patients say they're great for explaining complex medical issues.

For Hospitals, There's No App For Adopting Tablet Computers

For Hospitals, There's No App For Adopting Tablet Computers 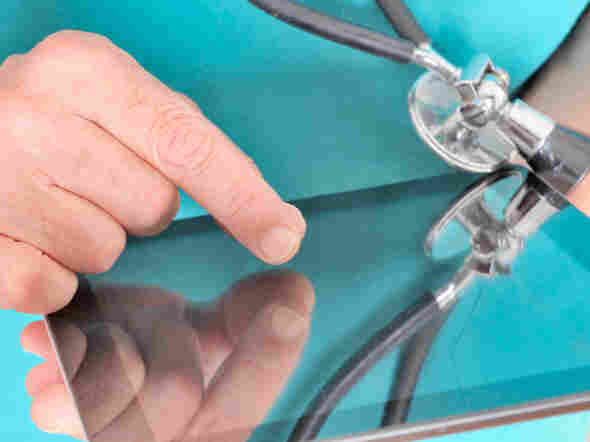 Tablets are easy to find at the local coffee shop but are still scarce at hospitals. /iStockphoto.com hide caption 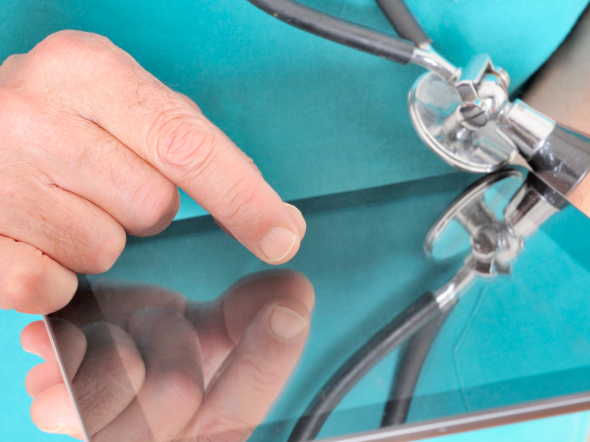 Tablets are easy to find at the local coffee shop but are still scarce at hospitals.

Hospitals are often eager to embrace the latest medical technology, but the road to deploying tablet computers has been a little bumpy.

iPads have been available since April 2010, but less than 1 percent of hospitals have fully functional tablet systems, according to Jonathan Mack. He's director of clinical research and development at the West Wireless Health Institute, a San Diego-based nonprofit focused on lowering the cost of health care through new technology.

"We're really lagging behind in the U.S. in using electronic medical records on mobile devices like iPads," Mack says.

The federal government is giving hospitals financial incentives to implement electronic medical records, but the most popular systems don't yet make apps that allow doctors to use the records on a tablet the way they would on a desktop or laptop. To use a mobile device effectively requires a complete redesign of the way information is presented, Mack says.

And that would require hospitals to "cough up a lot more money," he says. "When you look at a health system that has bought into an EMR, they're not ready to turn the boat around and start over."

Tablets: The Past And Future

The Touchy-Feely Future Of Technology

Timeline: A History Of Touch-Screen Technology

But some clinicians at UC San Diego Health System have been using the iPad since it first came out. Kate Franko, a physician assistant who is part of the hospital's transplant team, has been one of the pioneers.

On a brisk day in December, Franko stood by the bedside of patient Jose Reyna, a 24-year-old student who had received a new kidney just days earlier after three years of dialysis.

Franko scrolled through Reyna's medical records on her iPad 2, checking his vitals and medical notes. She also pulled up a graph of his blood test results over the past week to help him see how his new kidney was doing. A chest X-ray displayed on the iPad showed a build-up of fluid in his lungs. "You can see it's a little white in these corners. It's what we call patchy," she told him.

For Reyna, who is a tech guy with a smartphone sitting by his bedside, the in-hospital iPad was a very cool experience. He says the hospital in Desert Hot Springs, where he's from, still uses pen and paper.

The iPad "lets me know how I'm doing from the first time I got here," Reyna says.

But there are also several important downsides that so far have kept UC San Diego from deploying more of the devices. Right now, their electronic record system has a read-only app for the iPad, meaning it can't be used for entering all new information.

To get around the problem, clinicians log on through another program called Citrix. But because the product is built on a Windows platform and meant for a desktop, it can be clunky on an iPad and difficult to navigate. There are concerns about patient privacy, and spotty wireless coverage at the hospital also means doctors are logged off frequently as they move around.

In addition, the iPad doesn't fit in the pocket of a standard white lab coat. Franko bought a messenger bag that she uses to carry the device, but it's not all that convenient.

Franko also worries the extra technology causes clinicians to be distracted. "It's hard when you have an iPad in your hands, sometimes there are moments when you want to check your email and possibly update your Facebook, and it does take willpower to not be distracted," she explains.

It's still unclear whether tablets actually make medical care more efficient. In the meantime, even pioneers like Franko are hedging their bets. In addition to her iPad and two iPhones, she also carries a good old-fashioned pager, just in case.