Accessibility links
Diabetes' Economic Toll Goes Far Beyond Medical Bills : Shots - Health News Researchers found that even after adjusting for family background, obesity and various illnesses, young people with diabetes were more likely to drop out of high school than those without the illness. They were also more likely to skip or fail to complete college. 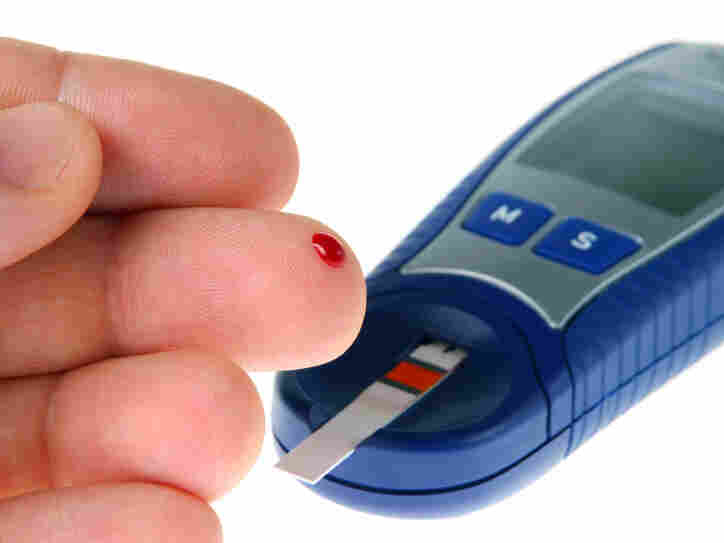 By now most people have probably heard the dire predictions about how much the growing prevalence of diabetes will cost the U.S. health system in the coming years and decades.

But a new study from researchers at Yale suggests that the disease, which currently affects nearly 8 percent of the U.S. population, could have significant nonmedical costs to society as well.

The study, which appears in the January issue of the policy journal Health Affairs, suggests that young people diagnosed with the disease are more likely to drop out of high school and to forgo or fail to finish college. As a result, they're likely to earn less than those without diabetes.

"These differences are pretty large," said Jason Fletcher, an associate professor at the Yale School of Public Health and lead author of the study. The differences, for example, are larger than differences between males and females and between whites and African-Americans.

The study, which used data from a national survey that followed the same group of 15,000 high school students from 1994 to 2008, found a rate of diabetes in line with other studies of similar age groups.

Researchers found that even after adjusting the data for family background, obesity and other illnesses, those with diabetes were 5 to 7 percentage points more likely to drop out of high school. They were also 8 to 13 percentage points less likely to attend college or to complete a degree than those without the illness.

As they aged, young people with diabetes lagged their high school classmates in employment by 8 to 11 percentage points, and were 8 to 13 percentage points more likely to receive aid from social programs.

The estimated 30,000 additional high school dropouts cost society an estimated $7 billion to $11 billion over those dropouts' lifetimes, the authors estimate. Those with diabetes went on to get jobs experience reduced annual earnings of between $1,500 and $6,000.

Over 40 years in the workforce, that could reduce earnings by of more than $160,000, the authors estimate.

Fletcher acknowledges that the study's results aren't "bulletproof," because they are self-reported. Still, the data do come from a population that was in similar circumstances — they all attended high school together. Following the same population over a long period of time is also considered an advantage in research like this.

When it comes to diabetes, "most people look at the medical costs," said Fletcher. With this study, people may have to begin to acknowledge that "there are some pretty large nonmedical costs" associated with the disease, and they start early.