Accessibility links
India Marks A Year Free Of Polio : Shots - Health News The absence of a new polio case in India is a milestone in the decades-long effort to wipe the poliovirus from the face of the planet. Only a few years ago, India reported more polio cases than any other country in the world. 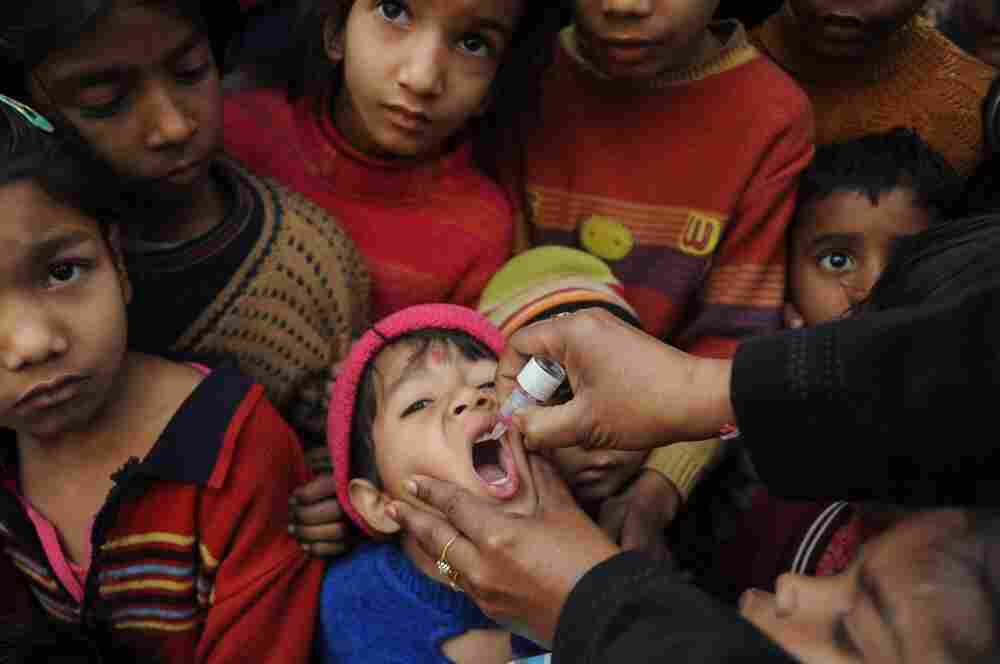 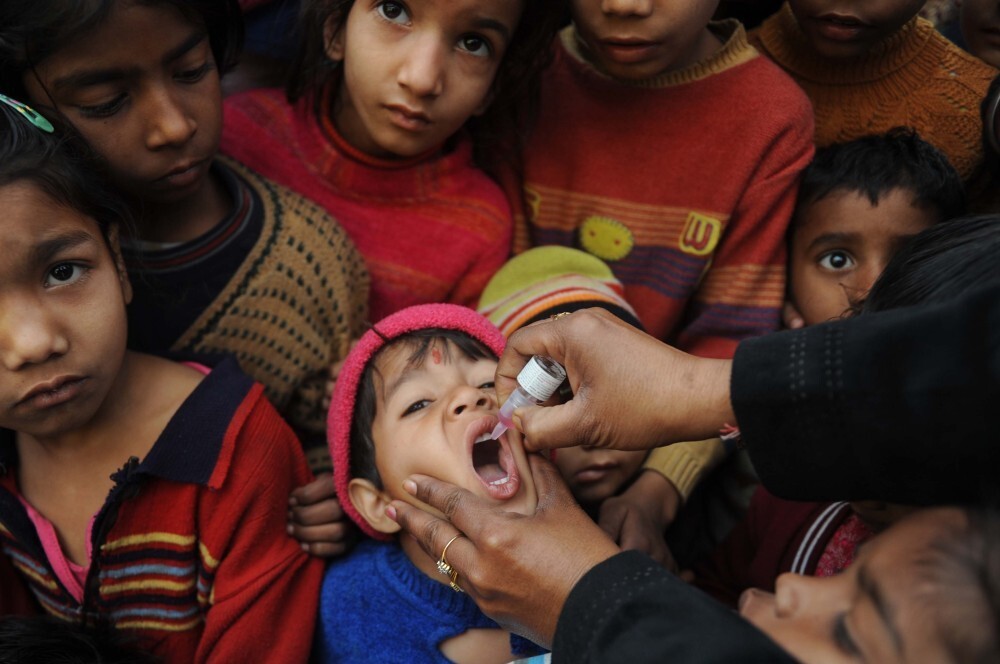 An Indian boy receives a polio vaccination from an Indian health worker in Amritsar last year.

A year ago today, India saw its last recorded case of polio in an 18-month-old girl in West Bengal named Rukhsar Khatoon. She recovered without lasting paralysis.

One year without another case is an impressive milestone in the decades-long effort to wipe the poliovirus from the face of the planet. Only a few years ago, India reported more polio cases than anywhere else — as many as 100,000 cases a year.

"India is a major, major victory," Dr. Hamid Jafari, who leads the World Health Organization's polio eradication efforts in India, told Shots. "It has established the feasibility beyond doubt of eradication. (If) it can be done under such tough conditions in India, this can be done anywhere else."

India's victory, if it's validated by careful vetting over next few months, comes at a time when the possibility of global eradication has never never looked so close. When all the numbers for 2011 are in, WHO expects to count about 700 cases of polio — about half the total in 2010.

If polio is eradicated, it would become only the second human infectious scourge to be conquered — after smallpox, in 1979. As in the case of smallpox, polio eradication is feasible because the virus only infects humans and there are effective vaccines against it.

A polio-free India means that there are just three nations where polio is considered endemic: Pakistan, Afghanistan and Nigeria.

The poliovirus has popped up in other places recently — notably China, where cases were imported from Pakistan, and Chad, from Nigeria. But India's long-standing role as the world's biggest exporter of polio to other countries has apparently ended.

The lessons from India will be sifted for years to come. But it's clear that conquering polio in that nation of 1.2 billion people is as much a story of massive persuasion as it is one of medical science.

India started its war on polio 17 years ago, and gradually the virus was eliminated in much of the country. But not from a wide swath in the north, in predominantly Muslim communities, such as Moradabad, a city of 4 million about 100 miles from the capital of New Delhi.

Galway, who worked with UNICEF on polio eradication in India, says many cases of polio throughout India were traced back to Moradabad and surrounding areas in the states of Uttar Pradesh and Bihar.

"Genetically we tracked every single virus in the country," Galways says. "We could tell you exactly where that virus came from. And in the end, all roads led back to Uttar Pradesh and Bihar."

And that's where the tactics of persuasion were crucial. These districts have big Muslim populations, and many Muslims believed rumors that polio vaccination was a plot against their community. It's a conviction that has hampered polio vaccination campaigns elsewhere – most notably in northern Nigeria.

"There were two kinds of misconceptions," says Hakeem Syed Masoom Ali Azad, an influential imam, or Muslim leader, in Moradabad. "No. 1, people said the medicine contains ingredients derived from pork, which is prohibited in Islam. Second, they said the medicine would make our children infertile."

But this week, Varisha Gul had no qualms when she took her 18-month-old daughter Mozamma to a child health clinic in Moradabad to be vaccinated.

"No, no, we give (the vaccine) to our children," she told Elliott Hannon, an NPR stringer based in New Delhi. She says she knows of no parents in Moradabad who refuse to have their children vaccinated against polio.

That's a testament to the massive educational campaign conducted over years by the polio strategists – beginning with respected scholars in Muslim universities and reaching all the way down to trusted shopkeepers.

So-called influencers were identified alley by alley in the neighborhoods of Moradabad and elsewhere. Eventually, imams began to preach sermons endorsing polio vaccination, issued fatwahs of approval, and announced vaccination clinics from their mosques.

"We went and changed their minds," the Moradabad imam says. "We took the (vaccine) ourselves in front of them and gave it to our children in front of them. People slowly began to come around, thank God! Because of our effort, our district hasn't had any new polio cases."

But Jafari of the WHO says India's work is far from finished.

"High levels of immunity in India will have to be maintained until there is global eradication achieved," he says. Otherwise imported cases could cause the whole effort to unravel.

So this Sunday, 100,000 vaccinators will fan out across high-risk districts such as Moradabad to vaccinate 40 million children. Other, nationwide, vaccination days will occur later in the year.

Every newborn Indian child needs to be vaccinated in case the virus reappears. Every child crossing the border from Pakistan will be vaccinated to detect importation of the virus. Sewage across India will be carefully monitored to detect even a single wild poliovirus.

Jafari's main worry is complacency. But his team allowed itself a quiet celebration.

"We will perhaps maybe have some cake and pass that around because people have worked extremely hard over the years," he said.