Accessibility links
Obesity Epidemic May Have Peaked In U.S. : Shots - Health News The obesity epidemic appears to have reached a plateau, according to the latest federal statistics. 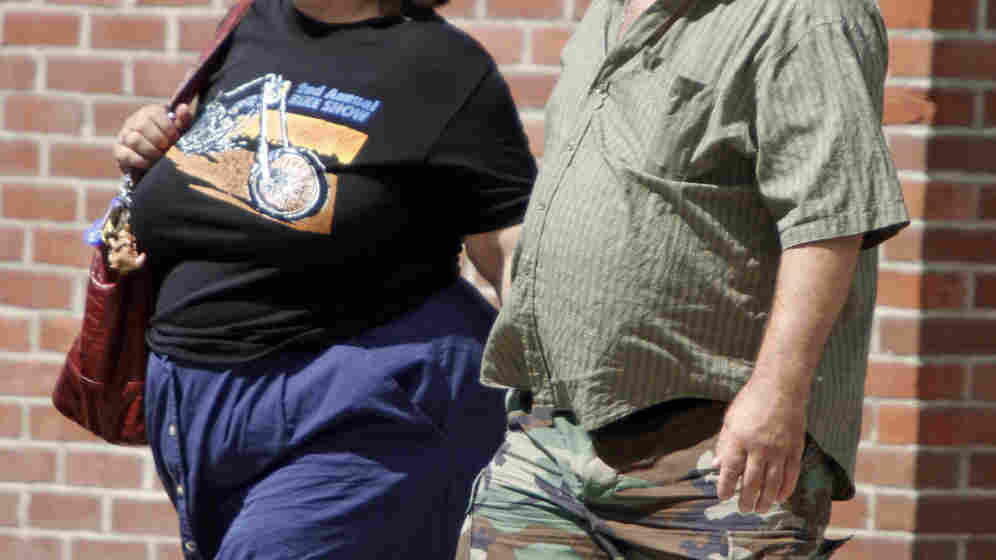 People stroll down a street in Montpelier, Vt., last summer. In 1995, 13.4 percent of Vermonters were considered obese. The figure climbed to 23.5 percent in 2011. The latest national data suggest the obesity epidemic has plateaued, however. Toby Talbot/AP hide caption 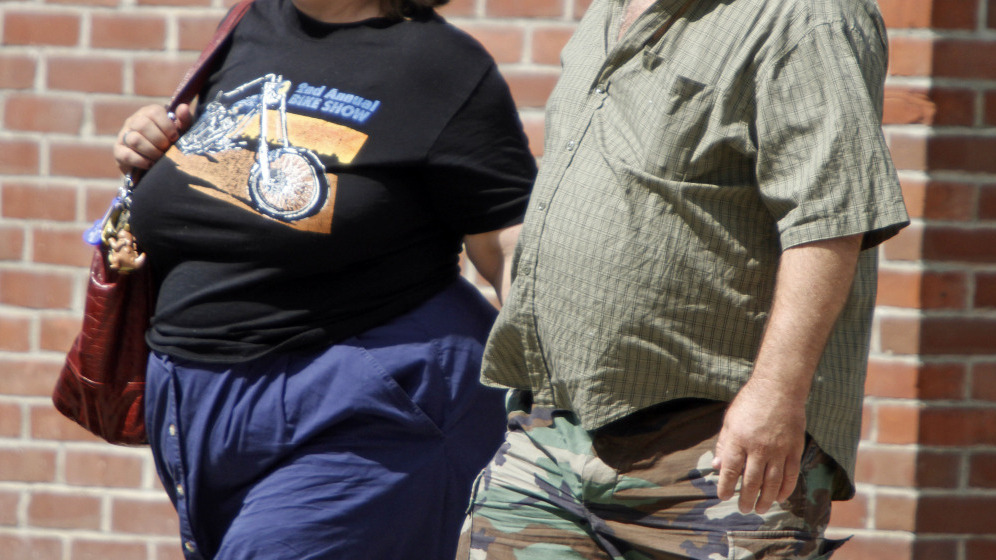 People stroll down a street in Montpelier, Vt., last summer. In 1995, 13.4 percent of Vermonters were considered obese. The figure climbed to 23.5 percent in 2011. The latest national data suggest the obesity epidemic has plateaued, however.

The nation's obesity epidemic appears to have hit a plateau, according to the latest federal data released Tuesday.

Obesity soared in the U.S. during the 1980s and 1990s, doubling among adults and tripling among children. That raised widespread alarm and debate about the causes and possible solutions. Obesity can increase the risk for diabetes, heart disease, cancer and other serious health problems.

The latest data come from 2009-2010 installment of the National Health and Nutrition Examination Survey, which surveys about 10,000 adults and children every two years.

The proportion of adult Americans who are obese held steady at about 35 percent, marking the second time that had happened between installments of the survey. And when the researchers examined the surveys over the long-term, they found clear evidence that that overall obesity had leveled off.

"These data basically show than we haven't seen any change probably since back to 2003-4 in obesity in any group," said Cynthia Ogden of the National Center for Health Statistics, which released the latest data and published two papers online in JAMA, the Journal of the American Medical Association. One paper focused on adults while the second focused on children.

The researchers didn't examine why the stall may be happening. But other experts speculate that at least part of it is all the attention the problem has been getting.

"We've seen some very effective changes that are occurring in schools and at the societal level in terms of food labeling, economic incentives, behavioral strategies," says Penny Gordon-Larsen, an obesity researcher at the University of North Carolina, Chapel Hill.

It's also possible that we're reached a kind of new normal, with the proportion of population who is predisposed to obesity having already become obese, says Harvard's David Ludwig, a specialist in treating overweight kids.

"Obesity prevalence can't keep going up year after year indefinitely. Ultimately we'll reach a state where those individuals who are susceptible to becoming obese for genetic reasons have already developed obesity," Ludwig says.

Whatever the cause, the plateau is welcome news, especially if it continues. But it's also far from letting anyone breathe a sigh of relief. "We may be at the end of the beginning. But we're by no means at the beginning of the end," Ludwig says.

One-third of adults and almost 17 percent of children are still obese. More than 78 million adults and more than 12 million children are obese, meaning the nation may still be facing a wave of diabetes, heart disease and other ailments because of obesity.

"We may have peaked, but we've peaked at levels that have never before occurred for humans," Ludwig said.

Ludwig and others wants the government to launch a more aggressive strategy that would include eliminating some farm subsidies, regulating junk food advertising to kids and mandating better nutrition in schools.

"We so far lack anything resembling a comprehensive national strategy," he says. "So while attention has certainly increased-- the airwaves are full of marketing of fast food and junk food to children and and we continue to have farm subsidies legislation that continue to pump billions of dollars of subsidies into the highest-calorie, poorest-quality commodities."

But others object to anything they say would increase government intervention in peoples' personal lives. "The notion that the government can save us from ourselves I reject from both a good government perspective but also actually from the perspective of trying to stem the tide of obesity," said J. Justin Wilson of the Center for Consumer Freedom, a Washington-based advocacy group that gets funding from the restaurant and food industries.

Others say the whole idea of an "obesity epidemic" has been overblown and that more emphasis should be put on getting more Americans to become fit rather than fixate on losing weight.