Accessibility links
Listen Up, Walkers: Watch Out For Traffic When Wearing Headphones : Shots - Health News A study of accidents involving pedestrians wearing headphones suggests a real risk from the audio distraction. Fumbling with or listening to music players can divert attention from dangers. The audio can also drown out sounds of trouble.

Listen Up, Walkers: Watch Out For Traffic When Wearing Headphones

Listen Up, Walkers: Watch Out For Traffic When Wearing Headphones 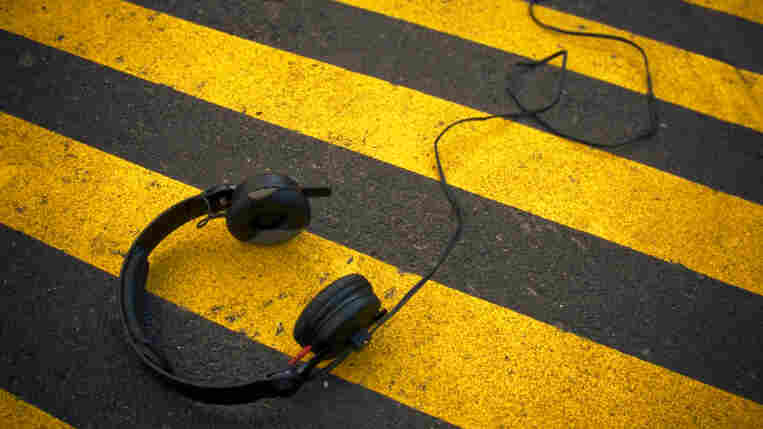 Beware of tuning out while crossing the street. iStockphoto.com hide caption

The study, published online by the journal Injury Prevention, is from researchers from the University of Maryland School of Medicine who looked at pedestrian accident data from a variety of sources between 2004 and 2011. They found 116 cases of death or injury in the U.S. that linked pedestrian-vehicle crashes with the pedestrian in question wearing headphones or earbuds.

The majority of those cases occurred between 2008 and 2001, which researchers said could reflect an increased awareness of the trend by the media (among the sources used was the Google News database). But it could also could reflect an actual increase in accidents, because "the ownership of electronic devices using headphones has increased in recent years."

One thing that was clear from the data is that the majority of pedestrians struck are male (68 percent) and under age 30 (67 percent). More than half the accidents involved a train, and in nearly a third (29 percent), a horn or other warning was sounded before the crash occurred.

The researchers say there are two problems that can cause people wearing headphones to be, well, oblivious to potential danger around them.

One is a phenomenon called inattentional blindness. The brain is too busy operating or listening to an iPod or MP3 player to pay attention to the potential danger caused by oncoming traffic.

The other is called environmental isolation. The sounds coming through the headphones simply overpower those coming from the street.

"You're literally plugging out the warnings that can save your life," said lead author Richard Lichenstein, a pediatric emergency room doctor at the University of Maryland Hospital for Children.

The study is not the last word on the subject, the researchers concede. Because the data are drawn from media reports, they cannot say conclusively whether accident victims might have also had mental problems or drivers might have been at fault, for example.

"While it might not be the best science in the world," Lichenstein says, "it's a great way to start the dialogue" about how potentially dangerous it is for people, particularly young people, to walk around in traffic wearing headphones.

Parents know about the need to make sure their children wear bicycle helmets or seat belts, Lichenstein says, "but we don't think of the ramifications when you give them their first MP3 player or iPod."

He said he hopes there will be further studies to better pin down not only the actual rate of pedestrian injuries associated with headphone use, but also the near-miss factor.