Accessibility links
Many Older Women May Not Need Frequent Bone Scans : Shots - Health News Many older women currently get scans every two years to check for signs of osteoporosis, a bone-thinning disease that can cause painful spine fractures and broken hips. But a new study suggests perhaps half of women over 67 might not need such bone scans more often than every 15 years. 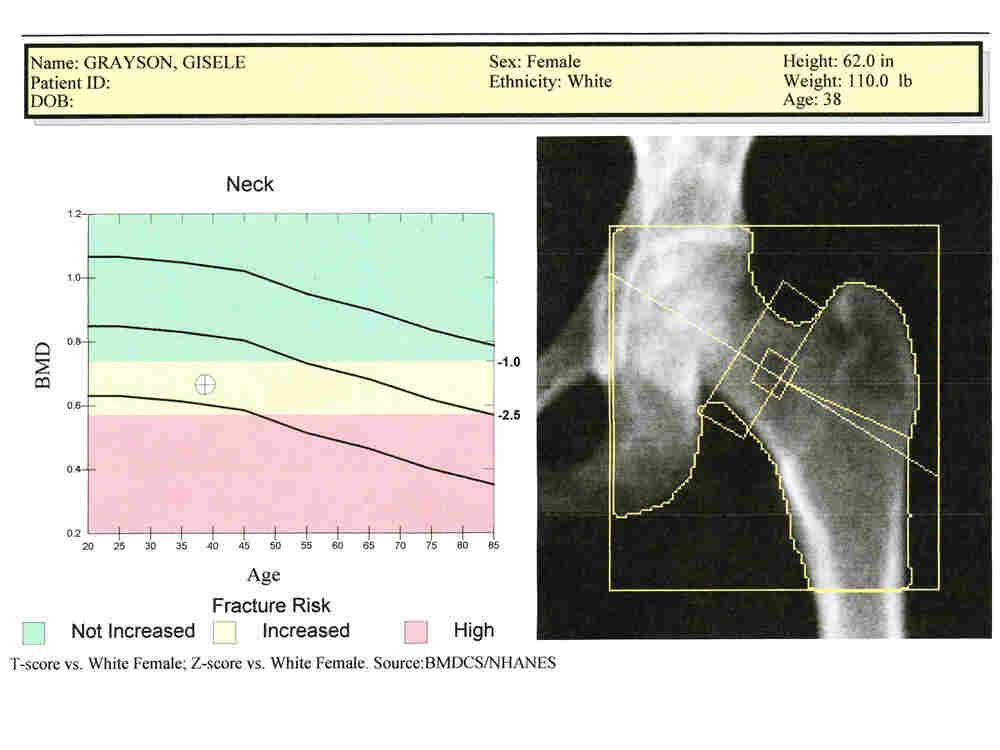 NPR journalist Gisele Grayson got her hip bone scanned a couple of years ago and discovered she has osteopenia. NPR hide caption 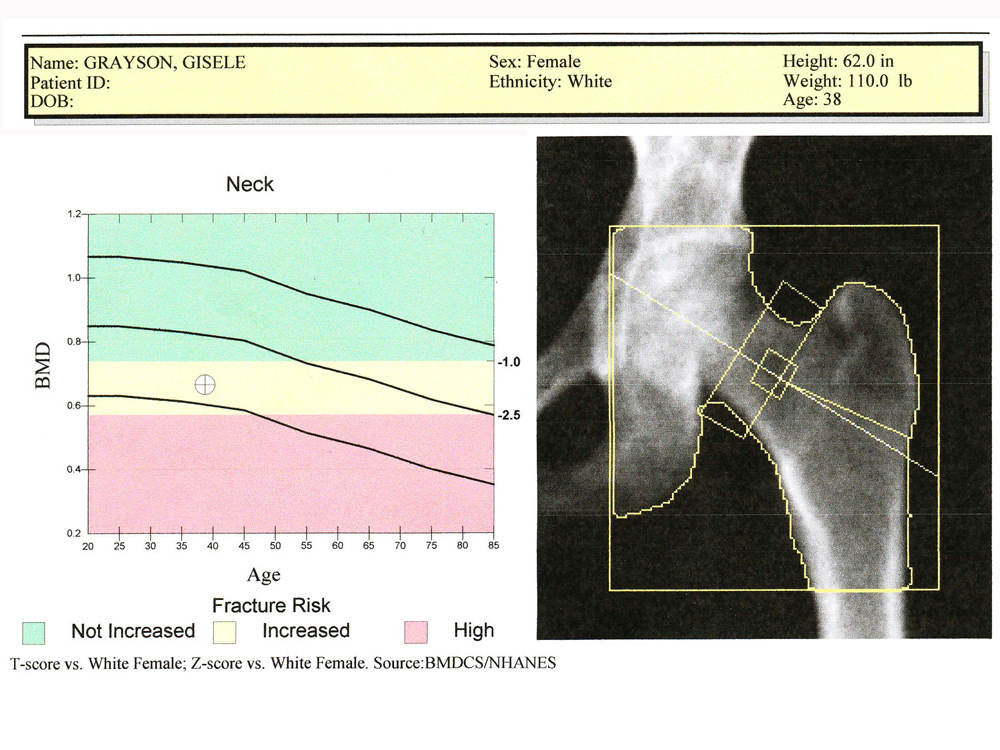 Scan results for my left hip.

The bone-thinning disease called osteoporosis is a big problem for women past menopause. It causes painful spine fractures and broken hips that plunge many women into a final downward spiral.

So it seemed to make sense to monitor older women's bones on a regular basis to see when they need to start taking drugs that prevent bone loss and fractures. Since Medicare will pay for a bone-density scan every two years, that's what many women have been getting.

But a new study says it's not necessary for perhaps half of women over 67.

These women show no bone loss, or very little, on their first bone density scan. For them, the study says, it's not necessary to do another scan for 15 years.

For women whose initial bone scan shows a moderate level of bone loss, the study indicates another scan in five years. And for those with pronounced bone thinning – but not yet at a level considered osteoporosis – scanning should be done once a year to predict when a fracture may be imminent and drug therapy should begin.

The study appears in this week's New England Journal of Medicine.

Dr. Margaret Gourlay of the University of North Carolina, who led the study, told Shots her team didn't expect older women with normal or near-normal bone density would take so long to develop osteoporosis. Of the 5,000 women in the study, half were in this low-risk group at the age of 67.

"We knew there would be a difference," Gourlay says. "We didn't expect that much of a difference."

The use of bone density scans has been controversial. Two years ago, NPR's Alix Spiegel reported that the test was originally promoted by drug maker Merck as a way of expanding the number of women using its drug Fosamax, which prevents bone loss.

Whatever its origins, bone scans have become an established part of medical practice. So the new federally financed study has important implications for older women and their doctors. "This paper provides useful guidance on how frequently people might need to be screened," says Anna Tosteson of Dartmouth Medical School.

Dr. Cliff Rosen, a bone specialist at Maine Medical Center, put it more bluntly. "This is going to make us think long and hard about what we 'know' from our data," he told Shots. "Like many things in medicine," he added, the prevailing notion that older women should have bone scans every two years "didn't come from anything scientific."

Many have argued, Rosen says, that "we're not going to wait for somebody to fracture before we start treating. We want to know how we can prevent those fractures. And we have good drugs. So tell us the time interval before we see people dropping into the danger zone. And that's what this paper tells us."

He predicts health care spending on bone density scans will go down "because we don't need to do the automatic every-two-years scan, which is what most providers are recommending.

"It will save Medicare dollars and target those people who really need closer monitoring and intervention," Rosen says.

Study author Gourlay isn't so sure about that. She acknowledges that many women are getting bone scans every two years "because Medicare will reimburse every two years."

But Gourlay points out that only 13 percent of Medicare-eligible women get a bone density scan in a given year – a sign that many aren't getting the baseline test that would inform their doctors what risk category they're in, and thus how often they should get a repeat scan.

"The main thing (this study) will do is not drastically cut down on bone density tests," Gourlay says. "We're hoping that people will just think about the test and that patients will ask for a first test more often. This is forgotten by both patients and primary care physicians."

She also says the bone density scan is not a perfect predictor of when a person is entering the osteoporosis danger zone. For example, it can't detect more subtle changes in the architecture of the bone.

So doctors need to pay attention to other osteoporosis risk factors, such as family history of osteoporosis, prior fracture after age 50, regular alcohol use, and medications such as steroids that cause bone loss.

Gourlay cautions against over-generalizing from the nearly all-white study group to other ethnic groups. And she stresses that the study doesn't apply to women under 67, who may have a different pattern of bone loss that will require a different schedule of bone scans. (For now, the U.S. Preventive Services Task Force does not generally recommend routine bone density scans until a woman reaches 65; it is silent about the frequency after that.)

The North Carolina group hopes to mine other data sources for clues on whether and how younger women should be screened for early signs of bone loss.