Accessibility links
When It Comes To Depression, Serotonin Isn't The Whole Story : Shots - Health News The antidepressant Prozac selectively targets the chemical serotonin. When the drug was introduced in the 1980s, it helped solidify the idea in many minds that depression was the result of a chemical imbalance. But the real story is far more complicated. 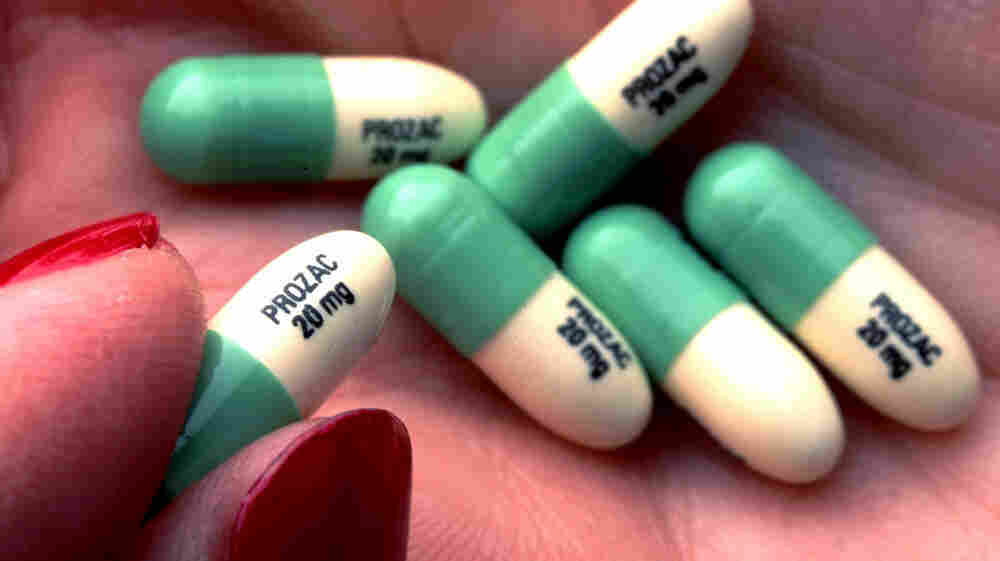 When I was 17 years old, I got so depressed that what felt like an enormous black hole appeared in my chest. Everywhere I went, the black hole went, too.

So to address the black-hole issue, my parents took me to a psychiatrist at Johns Hopkins Hospital. She did an evaluation and then told me this story:

Then she handed my mother a prescription for Prozac.

That was the late '80s, but this story of a chemical imbalance brought on by low serotonin has remained very popular.

"I don't know of any story that has supplanted it," says Alan Frazer, a researcher who studies how antidepressant medications work. He is also chairman of the pharmacology department at the University of Texas Health Science Center at San Antonio.

"It definitely continues to live — absolutely," agrees his colleague Pedro Delgado, the chair of the psychiatry department at UT. "If you go to your community doctor, you're likely to hear some version of that."

But for many scientists who research depression, this explanation is no longer satisfying.

"Chemical imbalance is sort of last-century thinking. It's much more complicated than that," says Dr. Joseph Coyle, a professor of neuroscience at Harvard Medical School. "It's really an outmoded way of thinking."

Coyle, who is also the editor of the journal Archives of General Psychiatry, says that though serotonin plays a role in depression, low serotonin is likely not the cause of depression. Scientific thinking has clearly shifted, he says.

Still, the story of serotonin remains. Why does it continue to have such a powerful grip on the popular imagination?

According to Frazer, to understand how the story of low serotonin came to dominate our understanding of what causes depression, you need to go back to the late '50s, to a psychiatric hospital in Switzerland.

That's where psychiatrist Roland Kuhn gave a newly developed drug to 10 patients who had been paralyzed by depression for years. Over the course of three weeks, he watched a near-miracle occur.

"There was this lightening of their mood," Frazer says. "They became more energized, more interested in things around them."

This was the birth of the very first antidepressants, called tricyclics. And with that birth came a question: How could these drugs possibly be working? Researchers had some ideas, but it really wasn't until the mid '60s, when the cause of Parkinson's disease was discovered, that a real narrative began to take shape.

It turned out that Parkinson's — a brain disorder — was caused by a deficiency of a chemical in the brain called dopamine. This discovery influenced the way scientists thought about depression.

"There is no doubt in my mind that the Parkinson's story had a strong impact on the way that people were thinking about depression," Frazer says. "It became easy to speculate that depression was due to a deficiency."

The question, of course, was what was deficient? Which chemical was too low? For decades researchers argued this question, but no one candidate took the lead. And then came Prozac.

Almost as soon as it was introduced in 1987, the antidepressant Prozac, which selectively targets the chemical serotonin, became a blockbuster. "Prozac just blew everything else out of the water," Frazer says.

This had less to do with the efficacy of Prozac (it is not better at treating depression than tricyclics, the earlier generation of antidepressants) than with the fact that the drug had relatively few side effects.

"It was very free of side effects," says Pedro Delgado. "And so it began to be used very widely, and there was a lot of enthusiasm for it."

That understates the case. In a very short time, Prozac became wildly popular, and again, Prozac worked on just one chemical in the brain: serotonin.

And really, it is because of the popularity of Prozac that the low-serotonin story took hold, even though, Frazer argues, the scientific research has not borne that out.

"I don't think there's any convincing body of data that anybody has ever found that depression is associated to a significant extent with a loss of serotonin," he says.

Delgado also makes this argument. In the 1990s, he carried out a study that showed that if you take a normal person and deplete them of serotonin, they will not become depressed. He says he feels this demonstrates that low serotonin doesn't cause depression.

Coyle is less absolute in his dismissal of the evidence on serotonin. His take is that while low serotonin probably doesn't cause depression, some abnormality in the serotonin system clearly plays a role. But most researchers have moved on, he says, and are looking at more fundamental issues like identifying the genes that might put people at risk for developing depression.

"What's being looked at are processes that are much more fundamental than just serotonin levels," he says. "We need to move beyond serotonin, and I think the field is."

So why are so many people still talking about low serotonin causing depression?

Frazer says it's probably because it has had, and continues to have, important cultural uses. For one, he says, by initially framing the problem as a deficiency — something that needed to be returned to normal — patients felt more comfortable taking a drug.

Still, there's no question that the story also has downsides. Describing the problem exclusively in biological terms has convinced many people to take antidepressants when other therapies — like talk therapy — can work just as well.

One critic I talked to said the serotonin story distracted researchers from looking for other causes of depression. But Delgado agrees with Frazer and says the story has some benefits. He points out that years of research have demonstrated that uncertainty itself can be harmful to people — which is why, he says, clear, simple explanations are so very important.

"When you feel that you understand it, a lot of the stress levels dramatically are reduced," he says. "So stress, hormones and a lot of biological factors change."

Unfortunately, the real story is complicated and, in a way, not all that reassuring. Researchers don't really know what causes depression. They're making progress, but they don't know. That's the real story.

It's not exactly a blockbuster.