Accessibility links
Working Long Hours Can Be Depressing, Truly : Shots - Health News People who work long hours are more likely to become depressed, even if they're working in the executive suite. That's according to a study of British civil servants. Other studies have found that people with higher incomes are less vulnerable to depression, but they didn't factor in work hours. 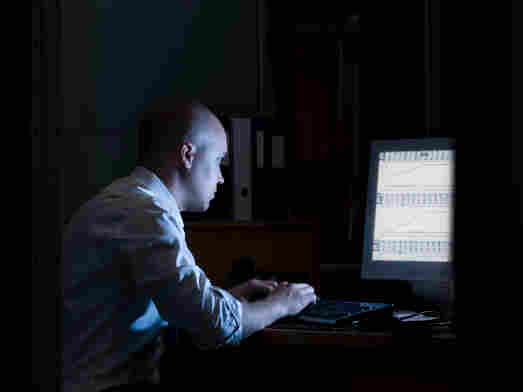 Working long hours may get you more than a paycheck. iStockphoto.com hide caption

Putting in a lot of of overtime can make a person more vulnerable to depression.

You might have guessed that. But now there are some hard numbers, thanks to a study that tracked the health of civil service workers in Great Britain.

People who worked 11 hours a day or more, more than doubled their risk of major depression compared with colleagues putting in eight hours a day.

Well, who wouldn't be depressed, trapped in the office all those hours? But the story's a bit more complicated — and interesting — than that.

Earlier studies have found that people with jobs are less likely to be depressed, as are people with higher incomes. And executives often put in long hours in order to pull down those fat salaries.

But this study, which was published online in the journal PloS One, found that long hours at the office wiped out the protective effect of income.

"Despite the fact that many of the employees who worked long hours were high [socio-economic status] employees," Marianna Virtanen, an epidemiologist at the Finnish Institute of Occupational Health who led the study, told Shots in an email, "working long hours was associated with depression."

All the people in the study were white-collar workers in the civil service, so it's a pretty small snapshot of the working world. Those working longer hours were more likely to be men in higher-level job grades. They were also more likely to be married or living with someone, and likely to drink more than they should.

Sounds almost like a British version of Don Draper, the hard-drinking ad exec at the center of the AMC series Mad Men.

The correlation between long working hours and depression didn't come to light until the researchers adjusted their data to level out income. That's a standard statistical technique to try to determine the effect of different factors. "In terms of prevention, revealing the relevance of long working hours as a risk factor among high-[socio-economic status] employees who otherwise have lower risk of depression seems important," the researchers write.

Working long hours also increases the risk of heart disease, and of decline in cognitive function, according to earlier studies by Virtanen that also followed British government employees.

Still, it's worth noting that the population groups most at risk for major depression are women, members of minority groups and people unable to work or unemployed, and those without health insurance, according to the federal Centers for Disease Control and Prevention.