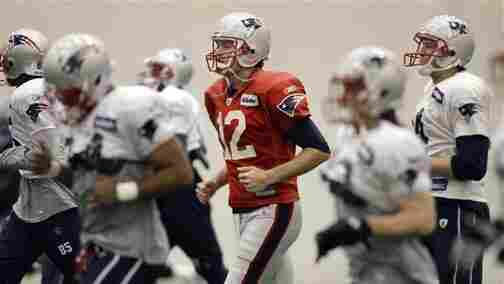 That search for relief has been more out of hope than based in fact.

"I was surprised," says Simon Melov, an associate professor at the Buck Institute for Research on Aging in Novato, Calif., and one of the researchers on a study looking at the anti-inflammatory properties of massage. "I wasn't expecting to see anything."

Now, it's true the study involved only 11 men. But the scientists didn't just ask the volunteers how they felt. The stuck needles in the volunteers' legs to biopsy their quadriceps muscles.

The men exercised hard, riding a stationary bike until they could ride no more. After that, one leg got a 10-minute massage. The researchers compared muscle cells from the two legs at a very deep level.

They found that the massaged muscles produced fewer cytokines, proteins that can cause swelling and soreness. Those lucky muscles also made more new mitochondria, which produce energy in the body's cells. The findings published online in Science Translational Medicine.

That last part really interests Melov, who studies diseases that damage mitochondria. With more mitochondria, he says, the massaged muscles would be able to work harder in the future.

They could probably recover faster from the damage caused by strenuous exercise, too. "It raises the intriguing possibility that massage could be used as an adjunct therapy where there's muscle damage as part of the disease process," Melov says.

But for now, it's probably enough to know that we weekend athletes can help stave off soreness with the pleasure of a massage. Interestingly, the researchers found that massage had no effect at all on the amount of lactic acid in muscles. Lactic acid is a byproduct of exertion, and is widely thought by us civilians to cause muscle soreness.

"I've often had massages, and the therapist says, 'let's get this let me get this lactic acid out of you,'" Melov says. "I don't know what the genesis of that is."

One intriguing side note: Study co-author Mark Tarnopolsky is a pediatrician at McMaster University in Hamilton, Ont., who happens to be a world-class cross-country ski racer.

Tarnopolsky told Shots he was inspired to do this study after having massages as part of recovery from a serious hamstring injury. They must have helped: he's in Lake Tahoe today to compete in the ski orienteering World Cup.