Accessibility links
Addicts' Brains May Be Wired At Birth For Less Self-Control : Shots - Health News A study of cocaine addicts finds that they have abnormalities in areas of the brain involved in self-control. And these abnormalities appear to predate any drug abuse. 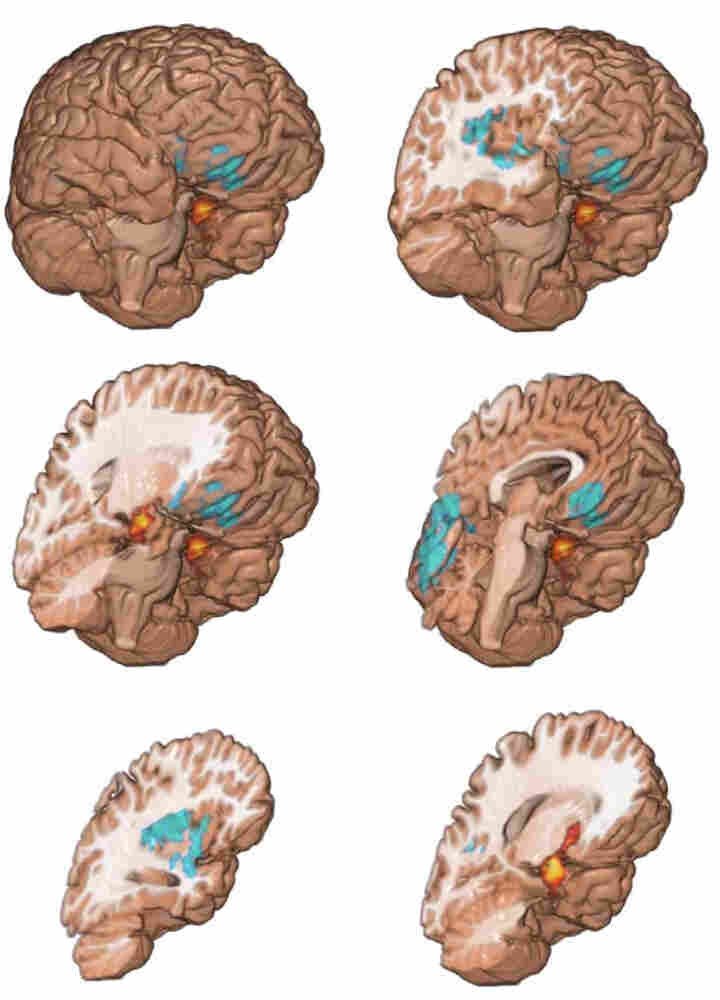 Many addicts inherit a brain that has trouble just saying no to drugs.

A study in Science finds that cocaine addicts have abnormalities in areas of the brain involved in self-control. And these abnormalities appear to predate any drug abuse.

The study, done by a team at the University of Cambridge in the U.K., looked at 50 pairs of siblings. One member of each pair was a cocaine addict. The other had no history of drug abuse.

But brain scans showed that both siblings had brains unlike those of typical people, says Karen Ersche, the study's lead author.

"The fibers that connect the different parts of the brain were less efficient in both," she says.

These fibers connect areas involved in emotion with areas that tell us when to stop doing something, Ersche says. When the fibers aren't working efficiently, she says, it takes longer for a "stop" message to get through.

And sure enough, another experiment done by Ersche's team showed that both siblings took longer than a typical person to respond to a signal telling them to stop performing a task. In other words, they had less self-control.

That's what you'd expect to find in addicts, Ersche says.

"We know that in people who are addicted to drugs like cocaine, that self-control is completely impaired," she says. "These people use drugs and lose control on how much they use. They put everything at risk, even their lives."

But the fact that siblings without drug problems also had impaired self-control offers strong evidence that these brain abnormalities are inherited, Ersche says.

And she says the finding also raises a big question about the siblings who aren't addicts: "How do they manage with an abnormal brain without taking drugs?"

Ersche hopes to conduct another study of the sibling pairs that will answer that question.

In the meantime, the findings about self-control have implications that go far beyond drug addiction, says Nora Volkow, director of the National Institute on Drug Abuse.

"Self-control and the ability to regulate your emotions really is an indispensable aspect of the function of the brain that allows us to succeed," she says.

That's because the part of the brain that decides whether to take a drug is also the part that helps us decide whether to speed through a yellow light or drop out of school, she says.

And this brain circuit seems to be involved in a lot of common disorders, she says.

"One of the ones that attracts the most attention is ADHD [attention deficit hyperactivity disorder], where kids are unable to control their response to stimuli that distract them," Volkow says.

Impulse control is also central to behaviors like compulsive gambling and compulsive eating, she says.

The new study shows it's possible to identify people who have inherited a susceptibility to these sorts of problems, Volkow says. And it should help researchers figure out how to help susceptible people strengthen their self-control, she says.

"Predetermination is not predestination," Volkow says.