Accessibility links
With Contraceptive Coverage Plan 2.0, Obama Pleases Allies, But Not Everyone : Shots - Health News Supporters who split with the White House over the original health care initiative are coming back to the fold now that the president has changed strategy. But some Catholics and Capitol Hill Republicans are still fuming. 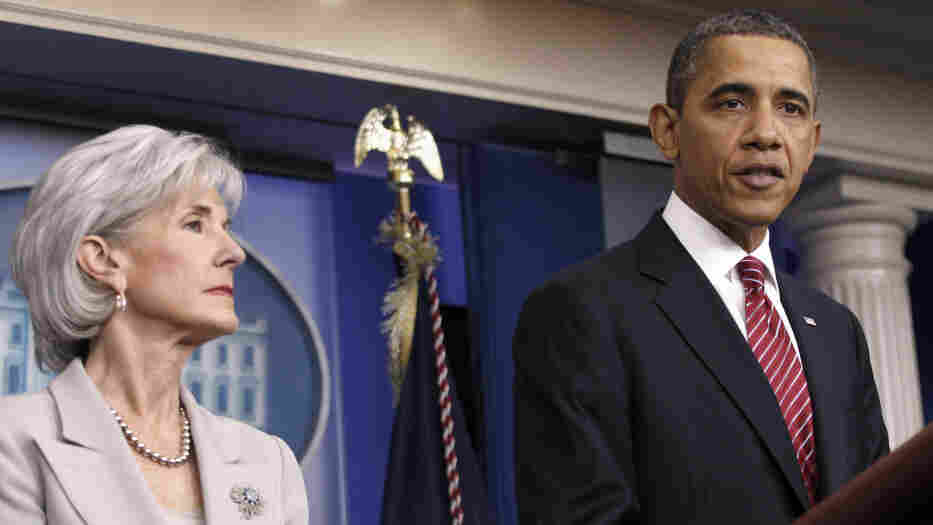 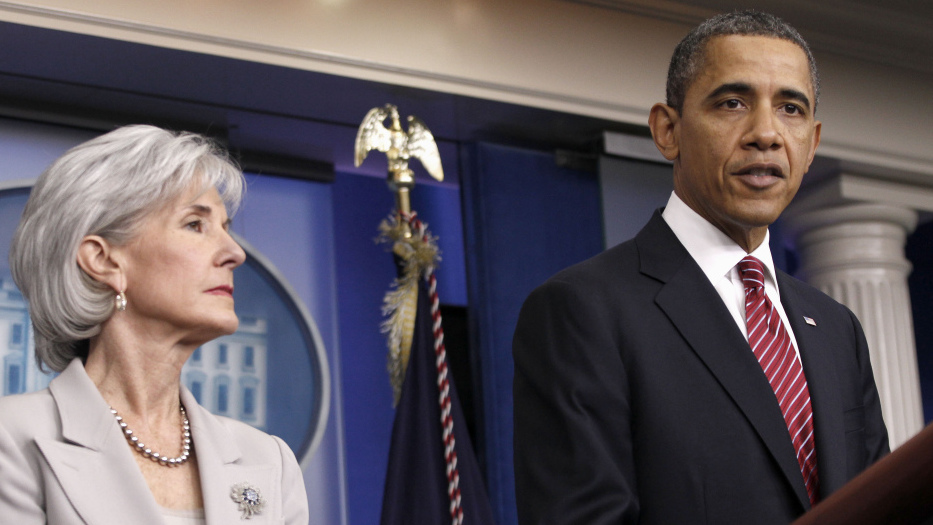 President Obama, flanked by Health and Human Services Secretary Kathleen Sebelius, announces the revamp of the contraception-care policy on Friday.

President Obama's latest proposed change in how contraceptives are covered by employer health insurance may not have ended the controversy that has raged for the past three weeks. But what the administration is calling an "accommodation" for religious employers has apparently mollified key allies who had opposed his original plan.

Speaking in the White House Briefing Room flanked by Health and Human Services Secretary Kathleen Sebelius, the president said he was not backing away from the "core principle" that "women will still have access to free preventive care that includes contraceptive services — no matter where they work."

But at the same time, he said, "we've been mindful that there's another principle at stake here — and that's the principle of religious liberty."

The original proposal would have made churches, synagogues and other houses of worship exempt, but not religion-sponsored hospitals, universities and charities.

His contraceptive coverage 2.0 will allow those latter institutions to also opt out, but women will be guaranteed no-cost access to contraception by a requirement that the institution's insurance company offer the coverage instead.

"The result will be that religious organizations won't have to pay for these services, and no religious institution will have to provide these services directly," Obama said. "But women who work at these institutions will have access to free contraceptive services, just like other women, and they'll no longer have to pay hundreds of dollars a year that could go towards paying the rent or buying groceries."

Women's groups were pleased by the announcement.

But more important, the new proposal brought back into the fold many of those who had reluctantly split with the president over the policy.

"I am pleased that the White House has taken further steps to ensure that all women have access to affordable contraception and to ensure that religious organizations will not be asked to violate their beliefs in the process," said Tim Kaine, former head of the Democratic National Committee, now running for a swing-state Senate seat in Virginia.

The announcement also won back Sister Carol Keehan, president of the Catholic Health Association, a key ally in getting the 2010 health law passed.

"The framework developed has responded to the issues we identified that needed to be fixed," she said in a statement.

But not everyone was satisfied. NPR's Barbara Bradley Hagerty reports that while the head of the U.S. Conference of Catholic Bishops called the shift "a first step in the right direction," other church officials weren't so charitable. Archbishop Thomas Wenski of Miami labeled the president's change "a smoke screen" that obscures issues of religious freedom.

And the reaction from Republicans on Capitol Hill was predictably harsh.

"They're not sorry they violated the First Amendment; they're sorry Americans didn't agree with them when they did," said Senate Minority Leader Mitch McConnell. "This whole episode demonstrates why politicians should not be the ones to make determinations about religious beliefs and is just another reason why the deeply flawed health law needs to be repealed."

Some of the most restrained reactions came from those who would be most affected — the insurance companies.

In a statement, the insurance industry trade group America's Health Insurance Plans said only that "we are concerned about the precedent this proposed rule would set. As we learn more about how this rule would be operationalized, we will provide comments through the regulatory process."

Other industry onlookers were less reticent.

He said there is simply no way that insurers will actually pay for the benefits and that they will end up passing the cost back to their customers, including the religious entities who are supposedly being excused.

And even those with a somewhat more charitable view of the proposal are still worried, such as Helen Darling, president of the National Business Group on Health.

"It isn't clear exactly how it's going to work," said Darling, whose group represents large employers.

Darling said she's happy the president found a formula that seems to satisfy many in the women's health-vs.-religious employer divide, but that doesn't mean that formula will necessarily be a workable one.

"The logistics will be a little bit complicated, there's no question about that," she said.