Accessibility links
Does Tylenol Worsen Asthma For Kids? : Shots - Health News Researchers have long known that aspirin can be risky for children who have asthma. Now some researchers are pointing to data that suggests acetaminophen could be a problem, too. 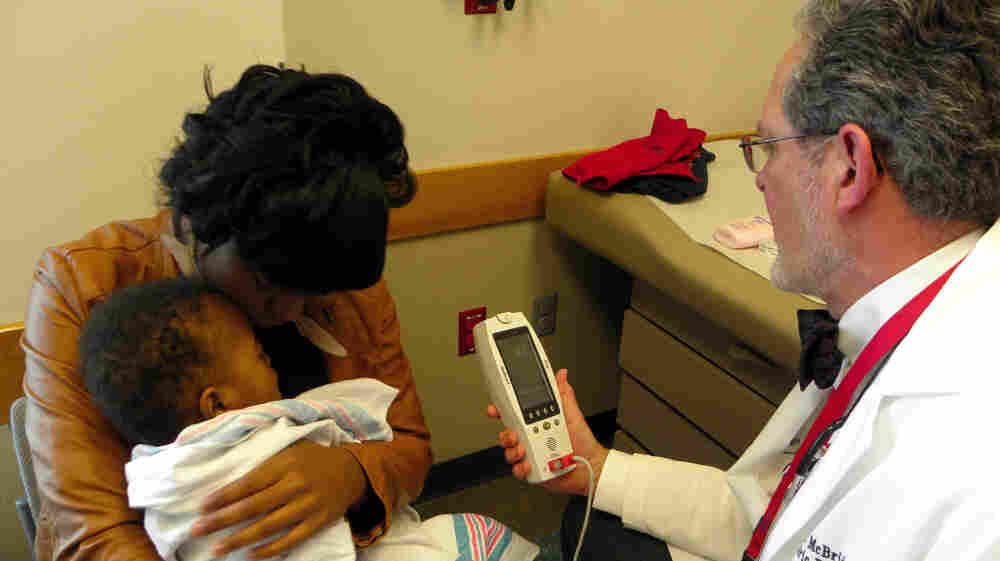 Dr. John McBride examines 9-month-old Martez after his mother, Ceasha Moorer, brought him in to check on his asthma. Courtesy of Karen Schaefer hide caption 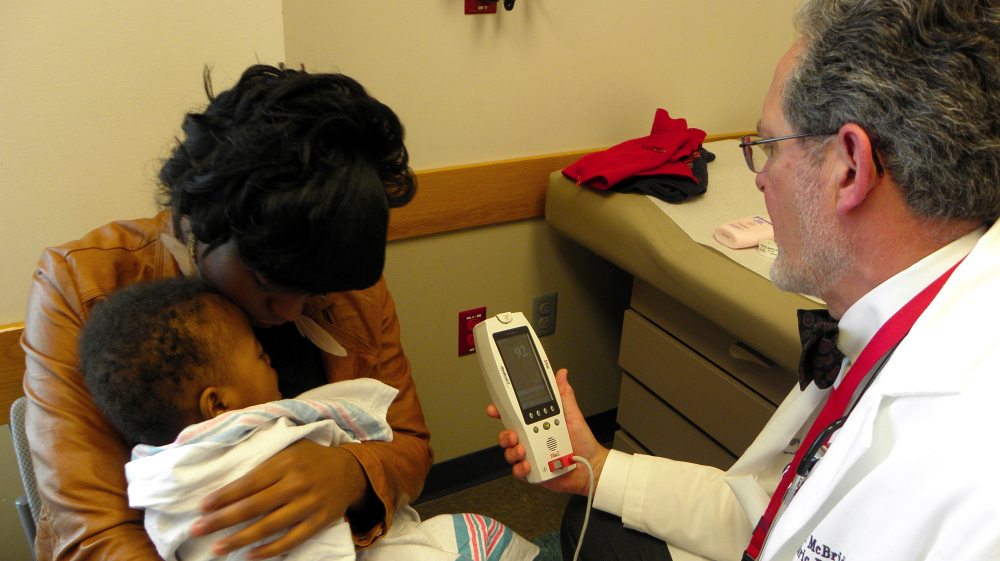 Dr. John McBride examines 9-month-old Martez after his mother, Ceasha Moorer, brought him in to check on his asthma.

Parents and doctors around the world have been alarmed by the dramatic increase in childhood asthma.

One factor in the upswing is better detection by doctors, but at least one doctor thinks a common over-the-counter drug also has something to do with it.

Dr. John McBride sees lots of kids with asthma. He's a pediatric pulmonologist at Akron Children's Hospital in Ohio. He knew of studies that raised concern about the safety of acetaminophen — brand name Tylenol — to treat colds and fever in kids with asthma. So he decided to look more closely at the research.

"I was stunned," he says. All the studies he looked at showed a link between asthma and acetaminophen.

"The more acetaminophen somebody takes, the more likely it is that they have asthma," he says. "Also, there's an incredible consistency. Everybody around the world who's looked for this association has been able to find it."

In asthma, the airways of the lungs get blocked by mucous and narrow. That leads to wheezing and shortness of breath. The rise in asthma has closely paralleled the increased use of acetaminophen.

There are no scientific studies proving the medication causes asthma, but McBride says it may make asthma worse in kids who already have it.

Nine-month-old Martez coughs and wheezes as McBride examines him and talks with his mom, Ceasha Moorer, about his asthma. "He coughs. He wheezes. There are multiple symptoms," she says. "He works very hard to breathe. When he's excited from crawling or even laughing, then he breathes really hard."

In the past when Martez got a cold, Moorer gave him Tylenol. But that seemed to make his symptoms worse. At McBride's suggestion, she stopped using it. Then one day, her aunt was looking after Martez when he had a cold.

In fact, acetaminophen is an ingredient in many cough and cold products — including NyQuil, Robitussin and Theraflu. It might exacerbate the asthma because it decreases levels of a molecule called glutathione, which protects the lungs.

"So removing the beneficial effect of glutathione exactly at a time children's lungs are being irritated might end up being just one factor that contributes to the onset of an asthma attack," McBride says.

McBride's recommendation? Don't give acetaminophen to a child who has asthma. Other doctors say it's too soon for that advice.

Many other factors could play a role in the rise of asthma, according to Dr. Stanley Szefler, head of pediatric pharmacology at National Jewish Health in Denver. "Vitamin D insufficiency, dietary changes, air pollution or better control of infections are perhaps all related to the increasing prevalence of asthma," he says.

Johnson & Johnson, maker of Tylenol, said in a statement that the medicine has been used safely and effectively for more than 50 years. "There are no prospective, randomized controlled studies that show a causal link between acetaminophen, the active ingredient in Tylenol, and asthma," the company said.

It's important to control a child's fever, Szefler says. McBride agrees but says ibuprofen is a safer bet — at least until ongoing studies provide answers about the safety of acetaminophen for kids with asthma.