Accessibility links
Lights, Action, Drinking: Movie Scenes Tempt Teens To Binge : Shots - Health News Teenagers who see drinking scenes in movies are more likely to start drinking, and to binge drink themselves, according to a new study. Drinking features in almost all movies, even in many rated for children. 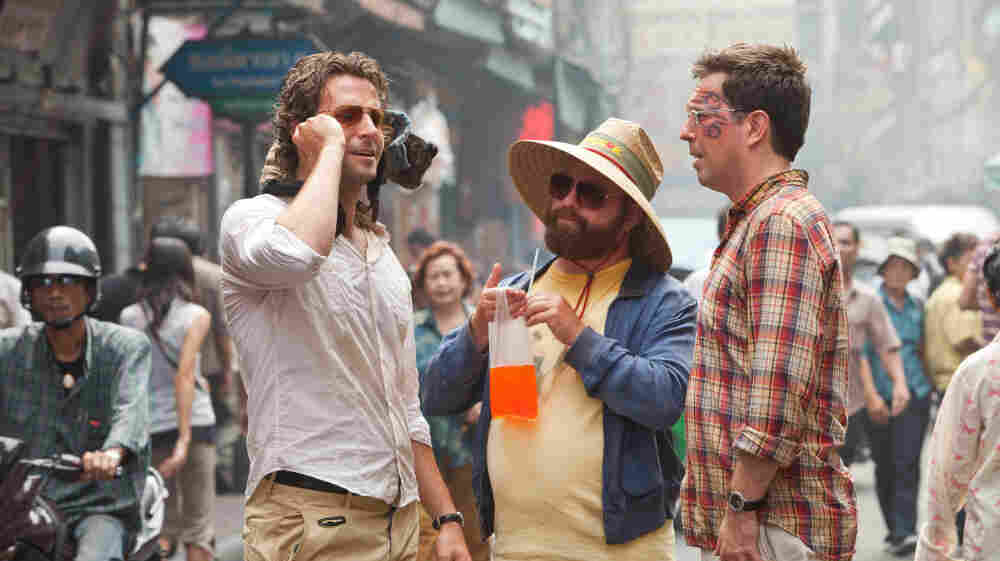 Drinking on screen, even in a cautionary tale like The Hangover Part II, can encourage kids to try drinking, according to new research. Melinda Sue Gordon/Warner Bros. Entertainment Inc. hide caption

At the movies, life looks like the The Hangover, Part II — the wild and funny part, not the so-sick-you-wish-you-could-die-and-get-it-over-with part.

What 14-year-old out for adventure wouldn't be up for that?

Children who watch movies with drinking scenes are twice as likely to start drinking alcohol themselves, a new study finds. They're also more likely to move on to binge drinking, compared to teens who watch very few movies.

And since almost all popular movies feature drinking, that's a problem, according to the researchers at Dartmouth Medical School. And it's a problem not just here, but around the world.

"Alcohol use in the movies is part of alcohol advertising," James Sargent, a professor of pediatrics at Dartmouth who led the study, tells Shots. "Manufacturers pay to put their brands in movies."

The researchers asked more than 6,500 10- to 14-year-olds about 532 movies, including box office hits in 2003, when the survey began. Those movies had been measured by trained coders who logged the number of seconds of on-screen alcohol use. Based on the movies the children reported seeing, they saw an average of 4.5 hours of alcohol use.

Depictions of drinking and product placements were both to blame, according to the researchers, who published their results in the online journal BMJOpen.

"Like influenza, images in Hollywood movies begin in one region of the world then spread globally," the authors write. (NPR recently reported on the rise of binge drinking among French teenagers, despite the long-held belief there that letting children drink wine with the family teaches responsible drinking.)

Tobacco companies have been barred for paying for product placements in movies, but alcohol companies have not. As a result, drinking scenes have proliferated regardless of a movie's rating. "It's really not incorporated into the ratings at all," Sargent says. "There's just as much in PG-13 movies as there is in R movies."

With older teenagers, parents should discuss alcohol use and product placement in movies. "A lot of families sit around and watch movies together, but it's uncommon for them to discuss things," Sargent says. "You want to teach them to be skeptical of what they see."

The researchers found that children were more likely to try alcohol if their parents drank, but that wasn't an influence on whether they went on to binge drink. Shots reported last week on another study that found that parental disapproval can be a powerful force to help teens avoid the impulse to drink.

Alcohol is the most commonly used and abused drug among teenagers. According to the federal Centers for Disease Control and Prevention, people ages 12 to 20 drink 11 percent of all alcohol consumed in the U.S.