Accessibility links
Diet Drug Qnexa Gets Thumbs-Up From FDA Panel : Shots - Health News In a reversal, a panel of experts is advising the Food and Drug Administration to approve Qnexa, a weight-loss pill, that was rejected in 2010. The potential benefits for overweight people exceed the risks, such as birth defects and increased heart rates, the panel determined. 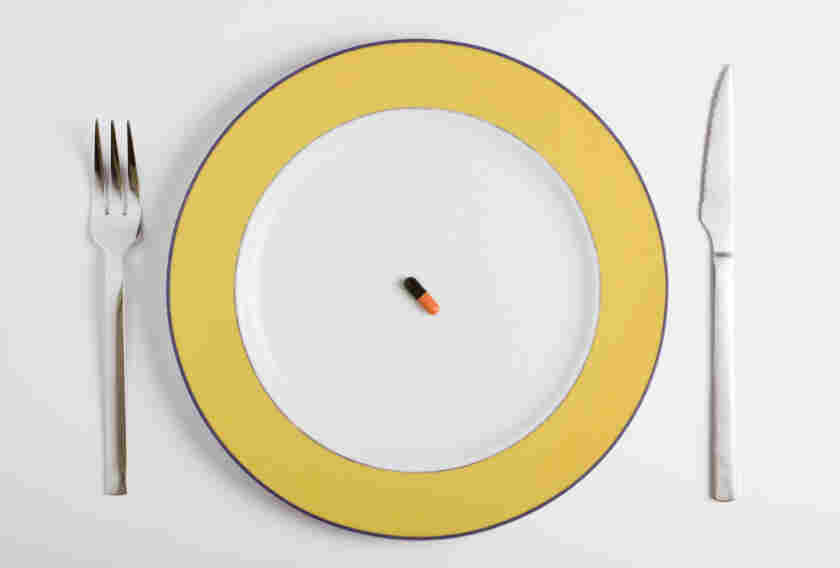 A new weight-loss pill could be coming to the menu. Luis Pedrosa/iStockphoto.com hide caption

A key federal panel Wednesday recommended the Food and Drug Administration approve the first new weight-loss drug in more than a decade.

At the conclusion of a day-long hearing, the FDA's Endocrinologic and Metabolic Drugs Advisory Committee voted 20-2 to endorse a request from Vivus to approve the drug Qnexa. The same panel gave a thumbs-down to Qnexa in 2010.

Qnexa is a combination of two generic drugs that are already on the market:

The FDA doesn't have to follow the advice of the panel, but the agency usually does.

The FDA rejected Qnexa in 2010 because of concerns about side effects, especially possible heart problems and birth defects such as cleft lips and cleft palates. The rejection came amid a series of rejections and withdrawals of weight-loss drugs, which put a spotlight on the FDA's handling of obesity medications.

Despite the obesity epidemic, the FDA hasn't approved a new weight-loss drug since 1999. In 2011, the the diet drug Meridia was pulled from the market at the request of the FDA because of concerns about heart problems. Only one weight-loss drug, Xenical, remains on the market for long-term use, but it is only marginally effective and causes diarrhea and other unpleasant side effects.

Some advocates have urged the FDA to consider allowing some drugs to be on the market even if they have risks, given the serious health problems caused by obesity.

During Wednesday's hearing, Vivus gave a series of presentations designed to show show that the benefits of the drug outweigh the risks. The risk of birth defects, one concern, was relatively low. And obesity itself can increase the danger that women will give birth to babies with birth defects, according to one presentation.

In addition, Qnexa appears to have other health benefits beyond weight loss, such as lowering blood pressure, that could outweigh any risks posed by an increase in the heart rate seen in some patients, according to another presentation.

Vivus also outlined a plan to reduce the risk that pregnant women might take Qnexa, including regular pregnancy testing of women taking the drug.

For its part, the FDA presented concerns it had highlighted in new analyses posted on its website Friday, especially the increased risks for birth defects and the elevated heart rate. The federal Centers for Disease Control and Prevention also presented data on the birth defect risk from topiramate.

During the public comment part of the hearing, several obesity experts urged the panel to recommend approval, saying diet and exercise simply do not work for many people.

Kelly Close, who described herself as an advocate for people with obesity and diabetes, urged the panel to endorse the drug. She noted few drugs were in the pipeline for obesity. "The panel and the FDA has a chance to today to do something historic for obesity," Close said.

Joe Nadglowski of the Obesity Action Coalition, agreed. He noted that only one member of the committee had any experience with treating obesity.

"There is a significant treatment gap from Weight Watchers to bariatric surgery," Nadglowski. "There is a consequence of remaining obese."

Several health advocates, however, appealed to the panel to recommend against the drug, saying the risks outweighed the benefits.

"Qnexa doesn't give women what they need," said Kate Ryan of the National Women's Health Network, noting that many people regain whatever weight they lose while taking Qnexa once they stop taking the drug.