Accessibility links
New Methods Could Speed Up Repair Of Injured Nerves : Shots - Health News Scientists say they've developed a technique that reconnects the severed ends of a nerve, allowing it to begin carrying messages again very quickly — at least in rats. Usually, severed nerves must regrow from the point of injury — a process that can take months, if it ever happens. 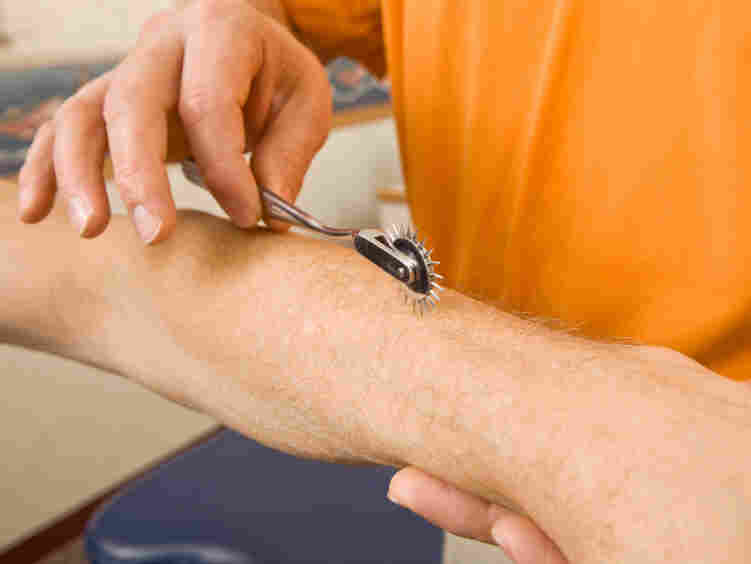 Pinwheels like these are often used to test nerve responses. iStockphoto.com hide caption

When a nerve is injured, it's often hard to get it to regrow fast enough to restore function.

But now researchers say they can speed up that process, so that damaged nerves can be healed in days instead of months — at least in rats.

The scientists say they've developed a technique that reconnects the severed ends of a nerve, allowing it to begin carrying messages again very quickly. Usually, severed nerves must regrow from the point of injury — a process that can take months, if it ever happens.

This might eventually help the more than 50,000 people a year in the U.S. who suffer nerve injuries that leave them unable to use a particular muscle or without feeling in part of their body.

"It's exciting," says Wesley Thayer, a plastic surgeon at Vanderbilt University Medical Center and a co-author of the study.

Thayer says these peripheral nerve injuries are caused by everything from car crashes to gunshot wounds. But he says many of them happen when somebody does something careless in the kitchen.

"Unfortunately, a lot of people with granite countertops will place their hand down hard on a wine glass and actually sever nerves in their hand or forearm just because the glass shatters on these very hard surfaces," he says.

A slip while slicing a bagel can also cut a nerve. And nerves don't heal the way other body parts do, Thayer says.

"What happens after a nerve is transected is that between the brain and the injury, the nerve mechanism stays alive, but [the tissue] beyond that, it actually dies," he says.

The nerve on the side connected to the brain usually starts to regenerate, but very slowly — only about 1 or 2 millimeters a day. That's bad news if you cut a nerve in your shoulder that controls, say, one of your fingers, Thayer says.

"It will take, in an adult, over a year for that nerve to grow out and reach the hand," he says. "And over the course of that year, the muscle really develops a permanent atrophy and is no longer functional, even if the nerve reaches its target."

And it may not.

So for decades, scientists have been trying to find better ways to repair damaged or severed nerves.

George Bittner of the University of Texas, Austin, has been studying the problem since he was a graduate student in the 1960s.

He says a damaged nerve is a bit like a bridge with a missing section. "What you'd want to do is put some sort of patch in there and rejoin the two halves," he says.

Bittner worked with Thayer and other researchers to come up with a multistep process that appears to do just that.

First they expose the severed nerve. Then they use chemical compounds to reverse a process that normally seals the nerve ends shut. At that point, they draw the two nerve ends together with tiny sutures and apply more chemicals that cause the nerve ends to fuse. This work is reported in a study published online in the Journal of Neuroscience Research.

The technique can be done entirely with chemicals that are already approved for use in people, Bittner says. And it produced very good results in a study of rats that had their sciatic nerve cut, he says.

That nerve controls the entire leg, paw and toes, and without it rats are badly disabled. But rats treated with his technique got better as soon as they began to recover from the surgery, Bittner says.

"You'd be hard-pressed to know which rats after several weeks had their entire sciatic nerve cut and which had a sham operation, never had it cut," he says

Bittner isn't the only one working on this technique. Researchers at Harvard are also involved. And Thayer at Vanderbilt hopes to try the approach on people within a year.

Meanwhile, researchers at Purdue University have reported success fusing nerves a different way — using a substance made from the shells of crustaceans.

The new technique may eventually have a broader application in people, Bittner says. "If you could get it to work on peripheral nerves, it might then be applied to spinal nerves," he says

Another person thinking that way is Doug English. He was a defensive tackle for the Detroit Lions back in the 1970s and '80s.

"My football career was ended with a neck injury," English says. "I'm very fortunate it wasn't nearly as severe as so many of the neck injuries are."

English is president of the Lone Star Paralysis Foundation in Austin, which has helped support Bittner's research.

The foundation has just started funding efforts to use Bittner's technique on rats with spinal injuries.