Accessibility links
Teens Fare Worst After Concussions : Shots - Health News Teenagers had more problems with thinking after concussion than children or adults, according to a new study. They had problems with working memory six months to a year after being injured. 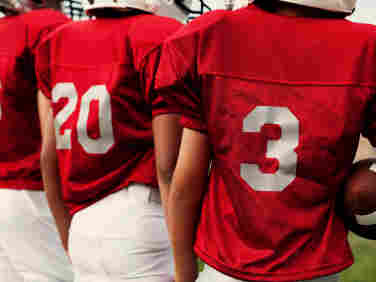 In teens' developing brains, a concussion can cause more disruption. iStockphoto.com hide caption

Concussions affect the thinking of teenagers more than they do that of adults or children, according to a new study. But all three age groups show lasting problems with working memory after sports concussions.

People use working memory for reading, problem solving and manipulating information. It's controlled by the prefrontal cortex at the front of the brain. And that part of the brain matures during adolescence. "It likely makes it more vulnerable", says Dave Ellemberg, a professor in the department of kinesiology at the University of Montreal who led the study.

The study, which tested the thinking of 96 people about six months on average after they sustained a concussion, found that children had deficits as great as those in adults.

"Often parents and coaches will think that a child's brain is more resilient," Ellemberg told Shots. "That's not the case. Even 6 to 8 months after the injury, we find marked deficits."

What's interesting about this study is that it tested the participants' thinking two different ways. The participants took tests of memory and thinking speed used by the National Hockey League. And they also took tests while their brain activity was measured by an electroencephalogram.

Other recent research has found that the tests used by professional sports teams and, increasingly, by college and high school teams, aren't all that good at detecting the long-term effects of concussion.

Ellemberg says that in earlier tests he did with EEGs, even if people did well on the standard neuropsychological tests after a concussion, their brains were working differently than usual in order to get the job done. This, he says, shows that "that the brain is struggling much more than it normally would to complete the tasks." The findings were published in the journal Brain Injury.

In addition to working memory, the participants' ability to sustain attention and focus was also affected six months to 1 year after the injury.