Accessibility links
Pet Therapy: How Animals And Humans Heal Each Other : Shots - Health News Dogs, cats, birds, fish and even horses are increasingly being used in settings ranging from hospitals and nursing homes to schools, jails and mental institutions. A growing body of scientific research suggests interacting with animals can make us healthier — and benefits them, too. 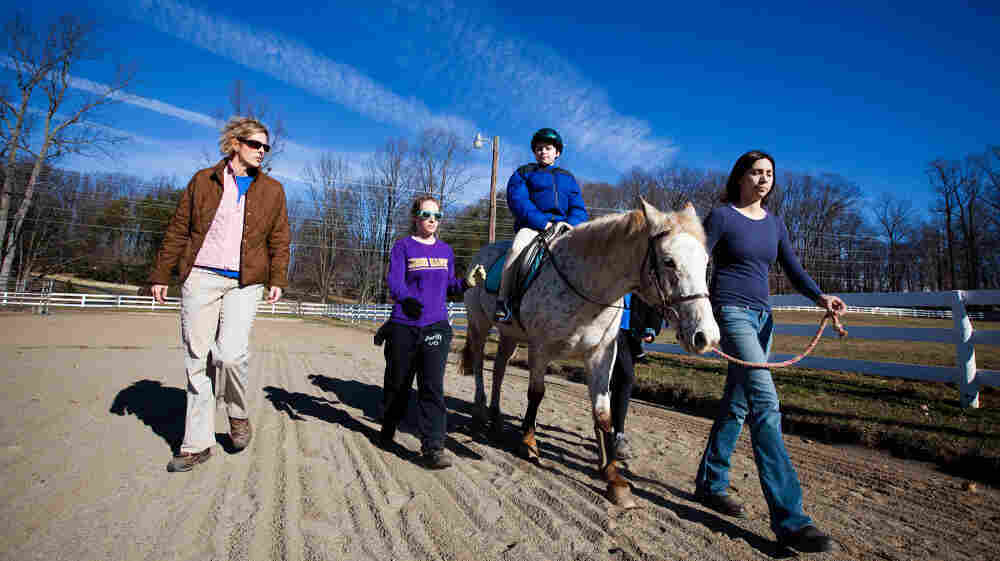 Those of us who own pets know they make us happy. But a growing body of scientific research is showing that our pets can also make us healthy, or healthier.

That helps explain the increasing use of animals — dogs and cats mostly, but also birds, fish and even horses — in settings ranging from hospitals and nursing homes to schools, jails and mental institutions.

Take Viola, or Vi for short. The retired guide dog is the resident canine at the Children's Inn on the campus of the National Institutes of Health in Bethesda, Md. The inn is where families stay when their children are undergoing experimental therapies at NIH.

Vi, a chunky yellow Labrador retriever with a perpetually wagging tail, greets families as they come downstairs in the morning and as they return from treatment in the afternoon. She can even be "checked out" for a walk around the bucolic NIH grounds. 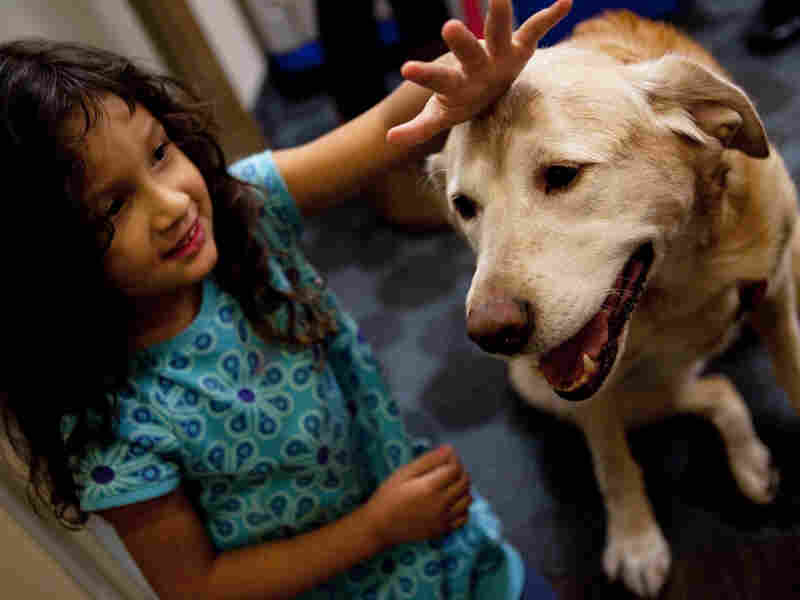 Thelma Balmaceda, age, 4, pets Viola, the resident canine at the Children's Inn on the campus of the National Institutes of Health in Bethesda, Md. Families stay at the inn when their children are undergoing experimental therapies at NIH. Melissa Forsyth/NPR hide caption

"There really isn't a day when she doesn't brighten the spirits of a kid at the inn. And an adult. And a staff member," says Meredith Daly, the inn's spokeswoman.

But Vi may well be doing more than just bringing smiles to the faces of stressed-out parents and children. Dogs like Vi have helped launch an entirely new field of medical research over the past three decades or so.

The use of pets in medical settings actually dates back more than 150 years, says Aubrey Fine, a clinical psychologist and professor at California State Polytechnic University. "One could even look at Florence Nightingale recognizing that animals provided a level of social support in the institutional care of the mentally ill," says Fine, who has written several books on the human-animal bond.

But it was only in the late 1970s that researchers started to uncover the scientific underpinnings for that bond.

One of the earliest studies, published in 1980, found that heart attack patients who owned pets lived longer than those who didn't. Another early study found that petting one's own dog could reduce blood pressure.

More recently, says Rebecca Johnson, a nurse who heads the Research Center for Human/Animal Interaction at the University of Missouri College of Veterinary Medicine, studies have been focusing on the fact that interacting with animals can increase people's level of the hormone oxytocin.

"That is very beneficial for us," says Johnson. "Oxytocin helps us feel happy and trusting." Which, Johnson says, may be one of the ways that humans bond with their animals over time.

But Johnson says it may also have longer-term human health benefits. "Oxytocin has some powerful effects for us in the body's ability to be in a state of readiness to heal, and also to grow new cells, so it predisposes us to an environment in our own bodies where we can be healthier."

Animals can also act as therapists themselves or facilitate therapy — even when they're not dogs or cats.

For example, psychologist Fine, who works with troubled children, uses dogs in his practice — and also a cockatoo and even a bearded dragon named Tweedle.

"One of the things that's always been known is that the animals help a clinician go under the radar of a child's consciousness, because the child is much more at ease and seems to be much more willing to reveal," he says.

Horses have also become popular therapists for people with disabilities.

"The beauty of the horse is that it can be therapeutic in so many different ways," says Breeanna Bornhorst, executive director of the Northern Virginia Therapeutic Riding Program in Clifton, Va. "Some of our riders might benefit from the connection and the relationship-building with the horse and with their environment. Other riders maybe will benefit physically, from the movements, and build that core strength, and body awareness and muscle memory."

On a recent day, one of the therapeutic riding program's instructors — speech therapist Cathy Coleman — worked one on one with 9-year-old Ryan Shank-Rowe, who has autism.

Well, not really one on one. The co-therapist in this session was a speckled pony named Happy. 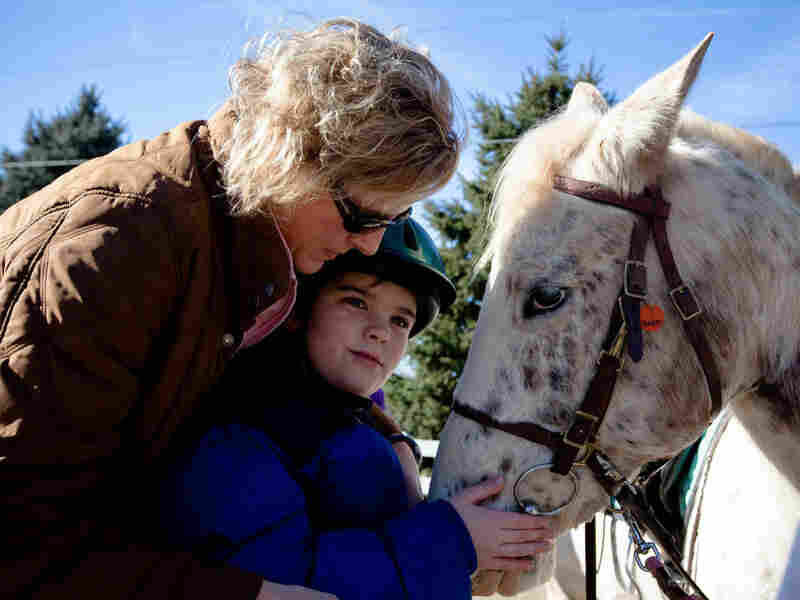 Cathy Coleman is a speech pathologist for the Northern Virginia Therapeutic Riding Program. She uses a horse named Happy in her therapy sessions with 9-year-old Ryan Shank-Rowe, who has autism. Maggie Starbard/NPR hide caption

Coleman says she used to see Ryan in a more formal office environment. But since he started horseback riding, his speech has actually improved.

"I get greater engagement, greater alertness, more language, more processing, all those things," she says. "Plus, he's just really good at it."

And Ryan's mother, Donna Shank, says the riding has helped with more than just his speech.

"It's helped his following directions, some really core life skills about getting dressed and balance — which really translate to a lot of safety issues, too."

But not all the research is focused on the humans. "We want to know how the animals are benefiting from the exchange," says Johnson of the University of Missouri.

Much of Johnson's research, for example, has focused on the value of dog-walking by studying volunteers who walk dogs at animal shelters. She even wrote a book, Walk a Hound, Lose a Pound.

Those programs have clearly helped people get healthier, she says. Not only do they increase their exercise while they're walking the dogs, "but it increases their awareness, so that they exercise more during the week."

But it turns out the program was also helping the dogs.

"What we found was that they were significantly more likely to be adopted if they were in the dog-walking group," she says, thanks to the additional exercise and socialization they were getting.

Johnson is now working on a new project with likely benefits for dogs and humans. Military veterans returning from Iraq and Afghanistan are providing shelter dogs with basic obedience training.

And while it's still early in the research, she says, one thing seems pretty clear: "Helping the animals is helping the veterans to readjust to being at home."

Now the research is getting an even bigger scientific boost.

The National Institutes of Health, with funding from pet food giant Mars Inc., recently created a federal research program to study human-animal interaction. The program, operated through the National Institute for Child Health and Human Development, offers scientists research grants to study the impact of animals on child development, in physical and psychological therapeutic treatments, and on the effects of animals on public health, including their ability to reduce or prevent disease.

Johnson says it's critical to establish the scientific foundation for the premise that animals are good for people, even if that seems obvious.

"The last thing we want is for an entire field to be based on warm fuzzy feelings and not on scientific data," she says. "So it's very important that now the NIH is focused on this ... and it is helping scientists across the country like myself to be able to do our research."