Accessibility links
Inconsistency: The Real Hobgoblin : Shots - Health News Why are politicians and those of us who vote for them so obsessed with inconsistency? 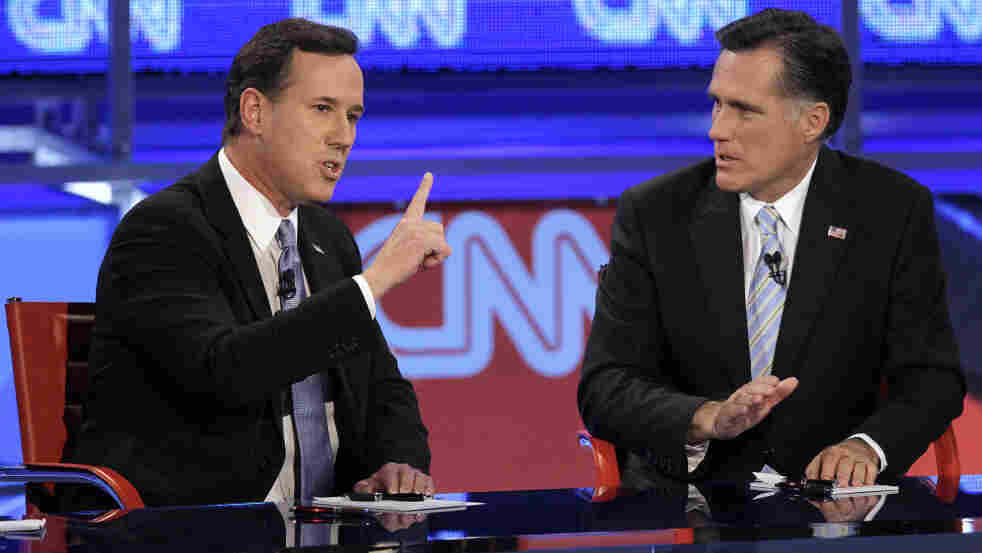 This campaign season, inconsistency seems to be, well, almost everywhere. Each flip-flopping politician revels in pointing out the flip-flopping ways of his opponents.

Why are politicians and those of us who vote for them so obsessed with inconsistency? We take that question on from three angles: how our brains are wired; the psychology of judging what's consistent; and how consistency plays out in leadership styles.

Jon Hamilton: Why Our Brains Hate A Flip-Flopper

The problem with flip-floppers is that they are, by definition, inconsistent. They're unpredictable.

And our brains don't like that, says David Linden, a professor of neuroscience at Johns Hopkins.

Match The Presidential Candidate To The Change Of Heart

To understand why, Linden says, it helps to consider how the brain looks for consistency and predictability in even a mundane event like reaching for a cup of coffee.

Long before your hand reaches the cup, your brain starts making predictions about everything from how much force will be required to lift the cup to how the coffee will taste.

Once the brain makes its predictions, it starts to "use sensory information as it comes in to compare the prediction with what actually took place," Linden says.

You grasp. You smell. You taste.

If the cup's weight and the coffee's flavor match the predictions, your brain declares victory. If not, it tries to figure out what went wrong.

We Asked: When Have You Changed Your Mind On A Fundamental Belief? March 5, 2012

But we have lots of brain circuits that are making predictions about all kinds of things, every second of every day. And the brain pays special attention to other people, Linden says.

"We're extremely attuned to the veracity, and the predictability, and the group spirit and the motivations of those around us," he says

That's probably from thousands of years living in groups. To stay alive, we had to know if the person who helped us yesterday might hurt us tomorrow.

Prediction is so important that our brains actually give us a chemical reward when we do it well, Linden says.

"We are intrinsically wired to take pleasure from our predictions that come true," he says.

Get it right and you get a burst of pleasure-inducing dopamine or a related brain chemical. Get it wrong and dopamine levels dip, Linden says.

All that training makes us extremely sensitive to the consistency and predictability of people we depend on, Linden says.

"If we have a sense that there is a mismatch between our prediction and their actions, that is something that sets off neural alarm bells," he says. And if we think they have been inconsistent about something fundamental, he says, we will feel betrayed.

"When we feel deeply betrayed, either by a leader, or by someone in our social circle, or by our beloved, that pain really is similar to physical pain," Linden says.

In other words, we're hard-wired to suffer from the inconsistency of flip-floppers. No wonder we don't like them.

The Flip-Flop Quiz: Match The Presidential Candidate To The Change Of Heart

The "flip-flopper" label can be deadly on the campaign trail (see: John Kerry, 2004). As voters, we value consistency in our politicians. We want to make sure they do what they say and say what they mean. Alas, politicians don't always oblige. Play our quiz below: Match the quote to the politician, and we'll tell you how he later flipped on the issue.

Alix Spiegel: How Your Tribe Affects Your View

My colleague Jon Hamilton makes the argument that we don't like flip-flopping. But this flip flopping thing? It's really in the eye of the beholder.

Consider the work of Jamie Barden, a psychology professor a Howard University in Washington.

Barden found a clever way to look at how people make judgments about inconsistent behavior in politics.

In one study, Barden gathered a group of students, both Democrats and Republicans, and told them that their job was to evaluate the behavior of a political fundraiser named Mike.

The first piece of information the students got about Mike was that after a long night of drinking at a fundraiser he'd organized, Mike drove home and wrapped his car around a telephone pole.

Then they found out that about a month after the crash, Mike had gone on the radio and delivered a screed about the dangers of drunken driving. Mike had driven while drunk, then Mike had preached against drunken driving.

The students were then provided with a blank space and the opportunity to weigh in on Mike's behavior.

Now obviously there are two possible interpretations of Mike's actions. The first interpretation is that Mike is a hypocrite. Privately he's driving into poles. Publicly he's making proclamations. He's a person whose public and private behavior is inconsistent.

The other interpretation is that Mike is a changed man. Mike had a hard experience. Mike learned. Mike grew.

What Barden found is that this decision is based much less on the facts of what happened, than on tribe.

In other words our judgments about what is inconsistent and what isn't are clouded by our social allegiances. In fact, the research makes it clear it is hopelessly clouded.

Further, there's a whole other school of research that shows that though we can often see this bias in our opponents, we are blind to the behavior in ourselves. We believe that we are earnestly making judgements based on facts, on reality.

A desire for consistency is wired into the brain, which is why we care so much about politicians being consistent.

We're also inconsistent about how we perceive consistency. We're more likely to spot it in our opponents than among our friends or ourselves.

But what are the consequences of consistency? Voters say they want consistent leaders: What happens when they get what they want?

Psychologist Philip Tetlock, at the Wharton School of Business at the University of Pennsylvania, has worked on an enormous research project for decades that can help answer that question.

He's based some of his conclusions on an ancient aphorism from the Greek warriot-poet Archilochus: "The fox knows many things, but the hedgehog knows one big thing."

A foolish consistency is the hobgoblin of little minds, adored by little statesmen and philosophers and divines.

Tetlock applies this analogy to politics. The hedgehog has one goal: It doesn't want to get eaten. Foxes, on the other hand, are crafty. They have lots of strategies to catch a hedgehog.

Tetlock thinks consistent leaders simplify a complex world into a few big ideas. That's why he thinks they're like hedgehogs.

"There are many different types of hedgehogs," Tetlock says. "You could be on the left or the right. You could be a free-market hedgehog, or you could be a Keynesian hedgehog or even a socialist or Marxist hedgehog."

By contrast, leaders who are foxes don't have a single agenda. They have lots of contradictory goals. They support government spending in one case; oppose it in another. They compromise.

The results are in: Foxes make the right calls more often than hedgehogs. If you want to know where the economy's headed, ask a fox.

But hedgehogs have a curious quality. The upside is when they're right, they're spectacularly right. Think of Winston Churchill, who saw the threat of Hitler before everyone else. The downside is hedgehogs are also more likely to be spectacularly wrong.

"Churchill had a low threshold for seeing threats to the British empire," Tetlock says. "He saw Gandhi as a terrible threat and he actually made comparisons between Hitler and Gandhi; comparisons that now we would regard as historically embarrassing."

Tetlock's work intersects with other research that shows leaders with inconsistent worldviews tend to do better in office. But leaders who have a clear, consistent message do better during campaigns.

The best presidents, Tetlock says, may be foxes — who disguise themselves.

So when you next hear a politician with a clear, consistent message, ask yourself, is this a hedgehog, or a fox in hedgehog's clothing?