Accessibility links
Experts: Annual Cervical Cancer Tests Unnecessary : Shots - Health News For years, doctors have recommended that women start getting Pap smears every year or two to try to catch signs of cancer early, when it's easiest to prevent and treat. But new guidelines say that testing every three years is a better idea for most women. 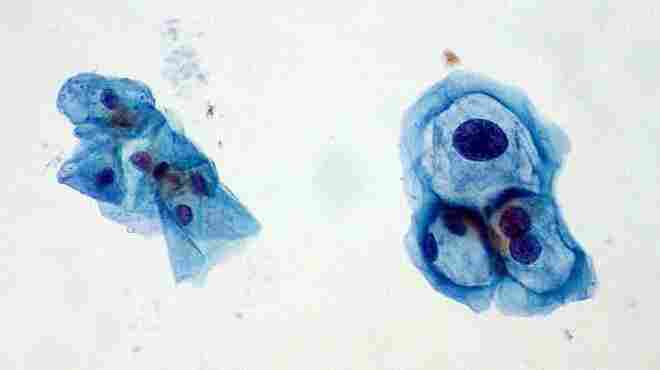 Cells gathered during a Pap test. Those on the left are normal, and those on the right are infected with human papillomavirus. Ed Uthman/Wikimedia Commons hide caption 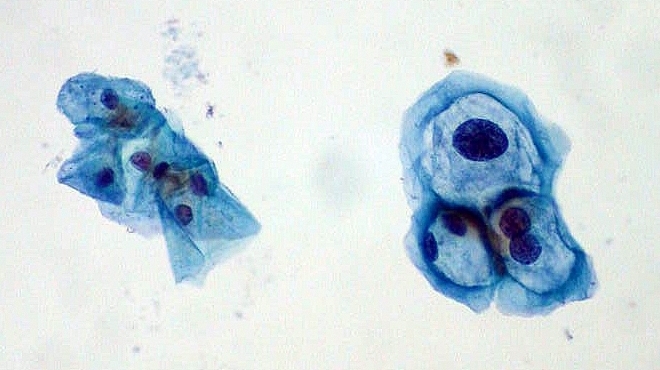 Cells gathered during a Pap test. Those on the left are normal, and those on the right are infected with human papillomavirus.

Women should get screened for cervical cancer far less frequently than doctors have long recommended, according to new guidelines released Wednesday.

More than 12,000 women are diagnosed with cervical cancer every year in the United States, and more than 4,000 die from the disease.

For years, doctors have recommended that women start getting Pap smears every year or two to try to catch signs of cancer early, when it's easiest to prevent and treat.

"Previously we had said screening should start either at age 21 or three years after the onset of sexual activity," says Debbie Saslow of the American Cancer Society, which issued one of the sets of guidelines along with two medical groups.

After reviewing the latest scientific evidence, the groups concluded that annual screening isn't necessary and, in fact, was harmful. Most women should wait until they turn 21, and then only get tested every three years if everything looks OK, according to the guidelines.

"This is the first time that we're saying we recommend against annual screening," Saslow says.

"If you compare the benefit of annual screening to screening every three years with the Pap test it's almost nothing," she said.

More frequent testing can cause real problems, she says. The Pap tests often produce false alarms, which lead women to undergo procedures to make sure there's no cancer.

And repeating those follow-up procedures over and over can damage the cervix, causing serious problems later if women want to have children, experts said.

"That can include preterm labor and then the birth of a premature infant or low birthweight infant," said Wanda Nicholson with the U.S Preventive Services Task Force, which simultaneously issued almost identical recommendations. Those recommendations, along with an accompanying editorial, were published in the Annals of Internal Medicine.

The guidelines also for the first time say that when women turn 30, they can get the Pap test along with a test for the human papillomavirus, a sexually transmitted virus that can cause cervical cancer. If both tests come back negative, then most women women can wait at least five years to get the tests again, according to the guidelines.

"The addition of this HPV test adds so much accuracy to the result that screening more frequently than five years will again be more harmful and not more beneficial," Saslow says.

The new guidelines also recommend women stop getting screened all together once they turn 65 and everything still looks OK.

Some previous recommendations to cut back on other cancer screeening tests, such as the U.S. Preventive Services Task Force's questioning of mammograms for breast cancer for younger women and PSA tests for prostate cancer, have triggered fears about rationing care. But Saslow said that's not the case.

"When people hear, 'Less is potentially better, more is harmful,' the assumption is you're trying to ration care--you're trying to save money. And absolutely that is not true," she says.

Still, some doctors are a little worried that eliminating the annual exams may make some women forget to get their Pap tests, or fail to come in for other tests that are important for a woman's well-being.

"We have to unlink the Pap test from the well-woman exam," said Juan C. Felix of the University of Southern California, who chairs the medical advisory panel of the National Cervical Cancer Coalition.