Accessibility links
Prone To Failure, Some All-Metal Hip Implants Need To Be Removed Early : Shots - Health News Shavings of metal can flake off of the artificial joints and cause serious pain and medical problems in the hip. About a half-million Americans have this type of implant, and though most patients won't have a problem, one doctor called the failure rate "unacceptably high." 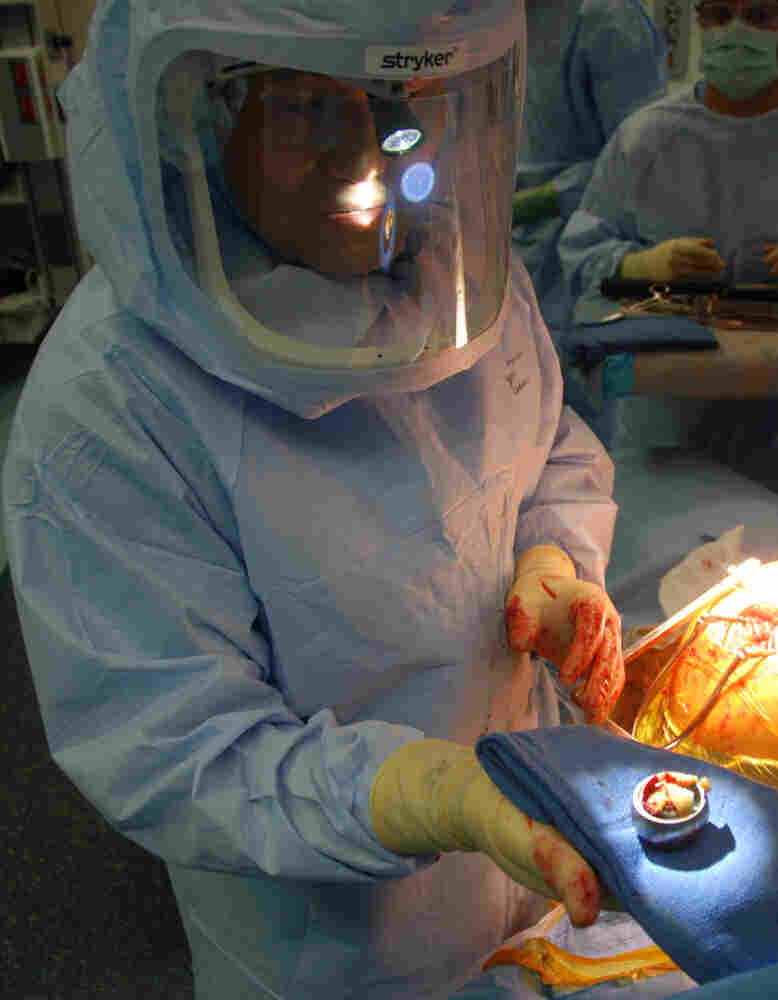 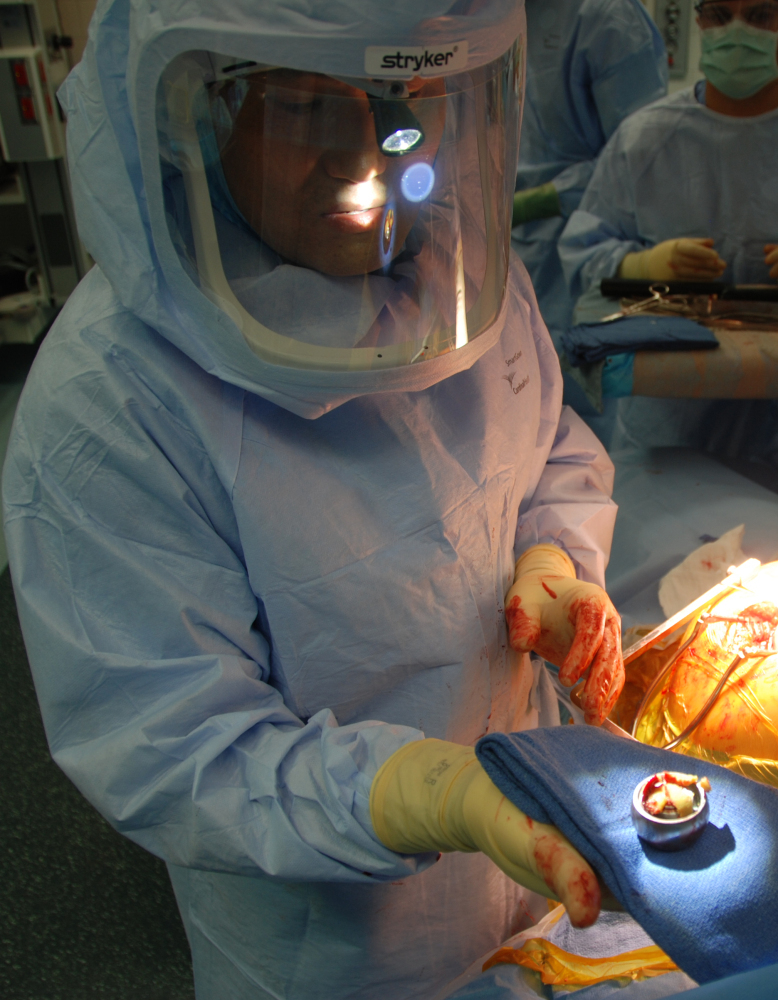 Young-min Kwon of Massachusetts General Hospital holds the metal-alloy ball of Susy Mansfield's faulty artificial hip joint. The yellowish tissue on top is dead muscle caused by a reaction to the metal debris produced by the defective hip implant.

When Susy Mansfield needed a hip replacement in 2009, her orthopedic surgeon chose a relatively new and untested kind of artificial hip made entirely of metal.

"He said, 'You're young. Metal is good for younger people. It's going to last a lot longer,' " says Mansfield, who was 57 at the time.

Older-model artificial hips are usually made of a tough plastic and metal. But they can wear out after 10 or 15 years, especially in people who are physically active like Mansfield. She runs a recycling facility and likes to hike, kayak and even windsurf.

So manufacturers of the newer all-metal hips have touted them as the right choice for younger patients. But for Mansfield, and thousands of other artificial hip patients, they've been a bad choice.

Recently she found herself in an operating room at Massachusetts General Hospital in Boston undergoing major hip surgery for a second time to remove the all-metal device she got more than three years ago. It was eating away at the surrounding bone and soft tissue.

Since her original implant, Mansfield has suffered from constant, worsening pain. "It's terrible," she said a few days before the so-called revision surgery over a cup of elderberry tea in her New Hampshire kitchen. "It's a hot pain ... that's there all the time. Every step is agony." She says she can't sleep without painkillers.

The first implant also became loose. "At one point, the doctor said, 'OK, I'll hold your hands ... now stand on that leg.' And I stood and it went kuh-CHINK, like that, and he said, 'What the hell was that?' "

Later Mansfield read a newspaper article about problems with all-metal hips and called the surgeon's office to ask if she had one. The secretary assured her she didn't. But she did some research and found out that she did.

In fact, she subsequently learned that the model she had, made by a subsidiary of Johnson & Johnson called DePuy, had been recalled. She says she didn't see the recall notice until a year after the fact.

At the time Mansfield got her all-metal hip, about 1 in 3 artificial hip patients across the nation was getting this kind. Since there are about 250,000 hip implants a year, that means around 80,000 of them involved the all-metal implants when they were most popular. Far fewer are believed to be implanted now, though they're still being marketed.

More than a half-million Americans are thought to have all-metal artificial hips. More than 5,000 of them have filed lawsuits against manufacturers. (Mansfield is not among them.)

Fortunately, Dr. Joshua Jacobs says, most patients who got all-metal implants don't suffer the kind of problems Mansfield did. He's chairman of orthopedics at Rush University Medical Center in Chicago and an officer of the American Academy of Orthopedic Surgeons.

"Most patients who have metal-on-metal bearings are doing fine," Jacobs says. "They have good clinical results. Even the implant that's been recalled, the majority of patients still have well-functioning implants. However, it does have a failure rate that is unacceptably high."

A recent study from Britain found a five-year failure rate of 6.2 percent — 1 in 16 patients. But the rate could be higher. Nobody really knows because the U.S. has no system for keeping track of how many were implanted or what happened to the patients. Jacobs says the orthopedic surgeons' group is trying to get such a clearinghouse off the ground.

After talking to Mansfield, I was interested in seeing for myself what kind of damage was going on around her first hip implant, and what was involved in replacing it. Orthopedic surgeon Young-min Kwon at Mass General allowed me to watch the operation.

Dressed in a kind of moon suit, Kwon hovers over Mansfield as he slices through skin and muscle until he exposes the faulty hip joint.

"You can see here the yellowish discoloration of the tissue that is no longer functioning," he says. That yellow tissue used to be Mansfield's muscle. The all-metal hip implant has been killing it.

Next, assisting surgeon David Anderson takes up a big mallet and, after several sharp blows, knocks off the implant's steel ball at the top of her thigh bone.

The surgeons find more dead tissue than they expected, although Kwon says he has seen much more severe damage than Mansfield has. "You see that staining? Black staining of the tissue?" Kwon says. "We call that metallosis."

Metallosis is the buildup of metal debris — tiny pieces of cobalt and chromium that have flaked off the implant and worked their way into surrounding tissue. It often causes swelling, tissue death and the kind of burning pain that kept Mansfield awake at night.

Researchers have found high levels of cobalt and chromium in the blood and organs of many patients with all-metal hip implants. But they aren't sure what risk that poses.

Many surgeons monitor blood levels of these metals in patients with all-metal hips, but Kwon and Jacobs say high blood levels alone don't justify removing the old implant if the patient is not having pain or other symptoms.

Next Kwon takes the mallet, removes the implant's metal cup from Mansfield's hip bone and holds it up for me to see. "There's actually no bone that's grown into this," he says. "It should be covered with the bone."

Kwon decides to do a bone graft to beef up the hip bone under the implant. It has grown thin, another effect of the all-metal joint. He sprinkles white pieces of bone from a cadaver donor into the hollow where the old implant used to be. The pieces will grow together and fuse with her own bone.

After several hours, the operation is finished. Kwon predicts "a reasonably good prognosis."

The original hip implant Susy Mansfield got wasn't tested extensively in humans before it went on the market. It was cleared for sale by the Food and Drug Administration after it was deemed "substantially equivalent" to those already on the market.

Kwon says that shouldn't happen in the future. "I think there are lessons for all of us — that you need to have scientific data to support any introduction of any new technology," Kwon says. "One might argue that [this one] didn't have enough."

The FDA says patients with all-metal implants should be monitored for problems.

Four days after her surgery, Mansfield is almost ready to go home. Remarkably, she has already passed a crucial test — going up and down stairs, on crutches.

She is still woozy from pain meds, but she is full of hope. "I'm going to actually be able to — I think, and fairly soon — have no pain!"