Accessibility links
4 Questions That Could Make Or Break The Health Care Law : Shots - Health News The Supreme Court on Monday begins the first of three days of historic oral arguments on President Obama's health care law. The court has boiled the arguments down to four key constitutional questions. First up: Does the court even have the jurisdiction to hear this case right now? 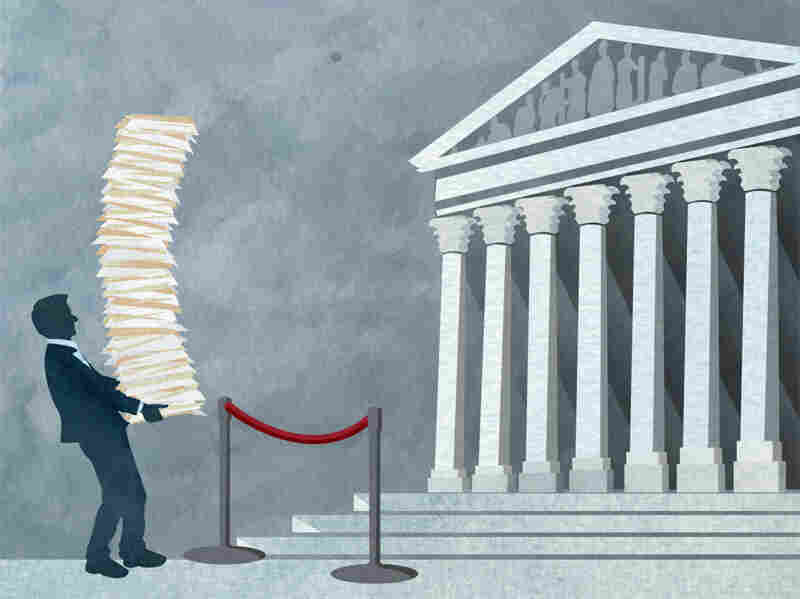 Does the Supreme Court have the jurisdiction to rule on the constitutionality of the health care law right now? That's the question the justices will consider during Monday's oral arguments. Adam Cole/ NPR hide caption 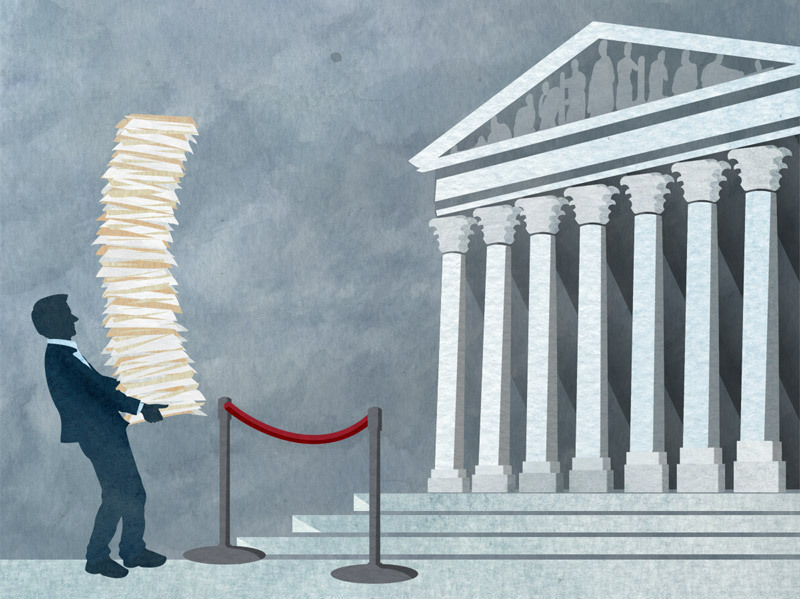 Does the Supreme Court have the jurisdiction to rule on the constitutionality of the health care law right now? That's the question the justices will consider during Monday's oral arguments.

It's the hottest ticket in Washington, D.C. Even the flossiest lawyers in town can't get a seat. Senators, congressmen, Cabinet and White House officials are all vying for a place.

At the U.S. Supreme Court, people have been lining up for days, waiting to hear this week's historic oral arguments on President Obama's health care law. The arguments will last for six hours over a three-day period, the longest argument in more than 40 years.

The court has boiled the arguments down into four questions. The first and threshold question is Monday, when the justices must decide whether an 1867 law called the Tax Anti-Injunction Act prevents the court from even considering this bill right now.

The theory of the law is that the U.S. could not have an effective tax system if every time somebody thought a tax provision was unconstitutional, he could just refuse to pay until a court makes a ruling. Thus, the Anti-Injunction Act requires people to pay the tax and then challenge it.

Under the health care law, the penalty for not having health insurance, which is paid to the IRS, doesn't kick in until 2015, so the argument is that there is no case because nobody has paid the penalty or suffered any financial injury yet.

Assuming the Supreme Court rules that there can be an immediate challenge to the law, the big issue, the central controversy, is the so-called individual mandate.

It requires everyone to have health insurance, in order to spread the risk and pay for the things everyone wants in this bill — namely, affordable coverage for everyone, with no discrimination based on previous medical conditions, and a requirement that insurance companies generally charge people in the same age groups the same rates.

Those challenging the law argue that this is the first time the federal government has required people to buy something they may not want, and that the government simply doesn't have that much power. The government counters that everyone consumes health care and that the only question is when.

There is no way to plan when somebody gets sick or gets hit by a bus, the government argues, and therefore the people who get medical care without insurance coverage are forcing everybody else — taxpayers and those who do have insurance — to pick up the tab.

If the mandate is struck down, the third question asks whether all of the other provisions in the law should fall, or, if not, which parts of it can remain standing. Even the government concedes that the way the insurance business works, if everybody doesn't buy in, the insurance companies can't possibly afford to cover people with pre-existing health conditions at the same price as healthy people.

Thus, even the administration concedes that if the mandate is found to be unconstitutional, the pre-existing conditions provision, which is the most popular piece of the law, would have to go, too.The opponents of the law go further, contending that all the provisions of the act are so inextricably intertwined, that it would all have to be invalidated.

The final question asks whether the Medicaid expansion in the health care law unconstitutionally coerces states into participating in the program. Medicaid is a joint federal-state program in which the states pay up to 50 percent of the costs to care for the poor and disabled. States can opt out, but so far, none has done so.

The Medicaid expansion under the Obama health care law would cover many more poor people — not just children, pregnant women, the disabled and the like. The federal government is paying all the costs of the expansion for the first three years, but then the states will pay up to 10 percent by the end of the decade. The catch is that the states can't opt out of the expansion only — it is take it or leave it for the whole program.

The states contend that such a condition is unconstitutional coercion, but so far, no court has bought that argument.

In addition to the legal arguments, there are also a number of political issues. When President Obama was running for office, he originally opposed having a mandate in his health care plan and criticized the one in Hillary Clinton's.

As president, he was eventually convinced that it was the only way to fund a workable plan for nearly universal coverage. That, in turn, was the only way to begin to get a handle on health care spending because it was impossible to ratchet down spending without everyone in the pool.

The political problem has been with the messaging. Many people still don't understand that in 2014, they aren't going to have to drop the employer coverage they have now and go out and buy a new policy. Additionally, a lot of people think it's just wrong for the government to require a person to buy a commercial product.

The irony is that opposition to the law mainly comes from Republicans, and the individual mandate idea was originally conceived by Republicans in the 1990s.

Given everything at stake in the case, it's impossible to make an accurate prediction on how the court will decide. The court's four more liberal members all have pretty clear track records supporting broad congressional authority to regulate a major part of the national economy, and health care represents about one-sixth of the U.S. economy.

But to win, the government will have to convince one of the conservative justices. Justice Antonin Scalia, one of the court's most conservative members, has written approvingly of the federal government's need to regulate broadly in a national market, but he has also said Congress cannot use any means it wants to achieve its goals.

Justice Anthony Kennedy, usually the swing vote in a 5-4 decision, has a soft spot in his heart for federalism, by which he means the limits of federal power and respect for state sovereignty. Many court observers have not written off Justice Samuel Alito, either.

And finally, there is considerable speculation that Chief Justice John Roberts, acting in his institutional leadership position, would be a sixth vote to uphold the law if there are five votes supporting it.

After the arguments this week, it might be easier to get a better fix on which way the wind is blowing.