Accessibility links
Supreme Court Justices Appear To See Insurance Mandate As A Tough Sell : Shots - Health News The U.S. Supreme Court appeared split Tuesday on whether the federal government can force people to buy health insurance. "Three of the conservatives are clearly going to vote to strike it down — that would be justices Scalia, Alito and Thomas," NPR's Nina Totenberg reports from outside the court. 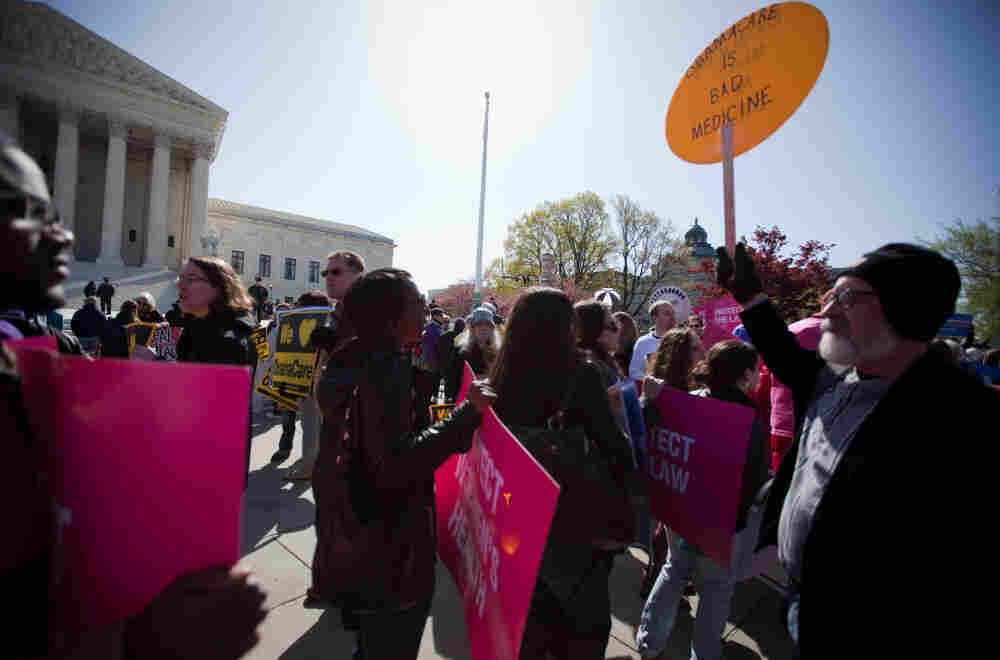 Supporters and opponents of the health care law rallied in front of the Supreme Court Tuesday, as the court considered the constitutionality of the insurance mandate. John Rose/NPR hide caption

Today's arguments hit the core of the Affordable Care Act: the mandate that requires just about everyone to have health insurance starting in 2014.

And the U.S. Supreme Court's justices appeared split on whether the federal government can force people to buy health insurance. The court's conservatives appeared skeptical and unmoved by the government's arguments in favor of the mandate.

"The government had a hard time, and if they win, they win narrowly," NPR's Nina Totenberg reported from outside the court. "I don't think you can call this."

The law says that if you're not covered by Medicare, Medicaid or insurance provided by your employer, then you'll have to pony up for coverage on your own or pay a fine.

Those challenging the law say the federal government is going way too far with the mandate. This, they say, is the first time the government is making people buy a commercial product they may not want. That's a huge overreach, they contend.

Just take a look at the very start of the brief filed by Paul Clement, the legal wunderkind who is leading the challenge by 26 states to the overhaul law:

"The individual mandate rests on a claim of federal power that is both unprecedented and unbounded: the power to compel individuals to engage in commerce in order more effectively to regulate commerce. This asserted power does not exist."

After Clement finished his arguments along those lines, SCOTUSblog's Tom Goldstein left the courtroom to file an update, saying, "The individual mandate is in trouble — significant trouble. It's too early to tell whether it will be struck down."

Still, it's clear that the court's conservative justices are "quite skeptical." And Goldstein said, "Paul Clement gave the best argument of any kind that I've ever heard."

In order to survive, the individual mandate will need to be upheld by the high court's four liberal justices and at least one of its five conservative justices. In the lead up to this week's hearings, some had speculated that the votes of Chief Justice John Roberts, Justice Antonin Scalia and Justice Anthony Kennedy might be in play. But during Tuesday's arguments, Scalia, at least, was clearly leaning toward striking down the mandate, Totenberg says.

Solicitor General Donald B. Verrilli Jr. was first up Tuesday, and he got his fill of tough questions.

Justice Anthony Kennedy, often a swing vote, pressed Verrilli with questions about the mandate and what limits there might be on the federal government's power to compel people to do certain things, such as buy particular foods.

Kennedy said the government faces a "very heavy burden of justification" for the mandate, The Wall Street Journal's Louise Radnofsky reported during the arguments.

Verrilli says that with the overhaul, Congress is regulating people's participation in the existing market for health care, not treading in brand-new territory. Liberal justices Ruth Bader Ginsburg and Stephen Breyer appeared to back him up on that.

But conservative justices remained skeptical. If the court lets the mandate stand, it may be difficult to limit what Congress can do on other fronts, Chief Justice John Roberts said, according to the Journal's Brent Kendall. "All bets are off," Roberts reportedly said.

At one point, according to the Journal, Justice Samuel Alito asked Verrilli, "Could you express your limiting principle as succinctly as you possibly can?"

As things stand now, about 26 million uninsured people in the U.S. could be subject to the mandate, according to an analysis by the Urban Institute released Monday. But about 8 million of them would be eligible for Medicaid or health insurance programs for children that wouldn't cost them much, if anything. Nearly 11 million would be eligible for subsidies under the law. And only about 7 million people would be subject to the mandate and not get some help paying for coverage.

Supporters of the mandate say those economics are essential to making other changes under the health law, such as a ban on insurers discriminating against people with pre-existing medical conditions. Near-universal coverage would also help make possible a requirement that insurance companies generally charge about the same amount for people who are about the same age.

In briefs and during Tuesday's arguments, the government has countered that health care represents a unique market. Everyone at some point will get health care. The real questions are when they will get it, and who pays for it?

The mandate, say the supporters, is the best way to make sure that everyone pays his or her fair share. As former Clinton administration Solicitor General Walter Dellinger put it to Totenberg before the arguments:

What's more, the federal government has argued that the law falls well within its constitutional powers to regulate commerce and to levy taxes. While lower courts have split, one conservative appeals court judge wrote last year in an opinion that went the administration's way:

"Regulating how citizens pay for what they already receive (health care), never quite know when they will need, and in the case of severe illnesses or emergencies generally will not be able to afford, has few (if any) parallels in modern life. Not every intrusive law is an unconstitutionally intrusive law."

In a few months we'll learn how many — or how few — of the justices see it that way.

Listen Live At 8 p.m. Tonight: The Supreme Court has wrapped the second day of oral arguments on the fate of the health care law. Tune in tonight for news and analysis from NPR's Nina Totenberg, Julie Rovner, Ari Shapiro and more.