Accessibility links
Justices Tackle The Big Question: Can Congress Force You To Buy Insurance? : Shots - Health News The health care overhaul law requires everybody to buy insurance. Critics see that as the ultimate threat to individual liberty. On day two of the health care hearings, the most conservative Supreme Court in decades takes up the question: Did Congress go too far? 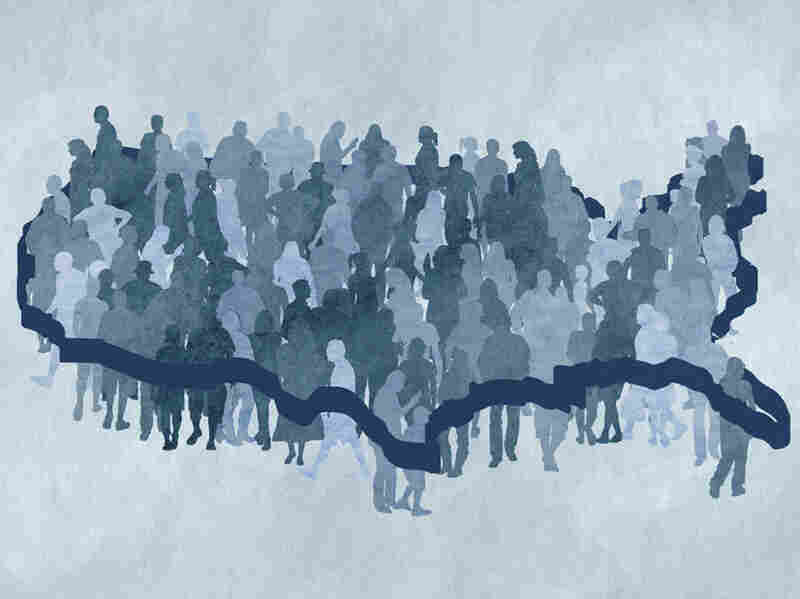 On Tuesday, the Supreme Court will consider whether Congress can require people to buy health insurance. Adam Cole/NPR hide caption

The U.S. Supreme Court gets to the heart of the health care arguments Tuesday. Almost exactly two years after Congress passed the Obama health care overhaul, the justices are hearing legal arguments testing the constitutionality of the so-called health care mandate — so-called because those words actually do not appear in the law.

The mandate requires virtually all legal residents in this country to have health insurance — either through Medicare, Medicaid or employer-provided insurance, or if you are not covered by any of these, through individual insurance that you pay for.

The law provides generous subsidies if you can't afford it, but you must have health insurance, and if you don't, you pay a penalty through your income taxes.

The mandate is essentially a trade-off for reducing the costs of health care policies overall and guaranteeing affordable coverage for people with previous medical conditions. The law is expected to provide coverage to some 30 million people who are currently uninsured.

Challenging the law are 26 states and the National Federation of Independent Business. Michael Carvin, representing the NFIB, will tell the justices that Congress exceeded its authority to regulate interstate commerce when it enacted the mandate.

"I'm sitting at home in my living room. I'm not buying health insurance," Carvin says. "I'm not engaged in commerce, local intrastate, interstate? So how can they force me to enter into the stream of commerce?"

The challengers contend that Congress, in order to pay for near-universal health care coverage, has for the first time required individual citizens to buy a commercial product they may not want.

"The reason we want people who are young and relatively healthy to buy health insurance is not because we are terribly concerned that those people are going to get unhealthy and end up in the emergency room," says Paul Clement, who is representing the states. "What we really want is those people to be part of the risk pool and contribute their premiums so that we can afford to pay for the health care for the other folks."

The government counters that health care is different because everybody will receive medical care at some point.

"I could get struck by a bus tomorrow or have a heart attack today and show up in the emergency room," says former Solicitor General Neal Katyal, who argued the health care cases for the Obama administration in the lower courts. "If I don't have insurance, it's the other American taxpayers who do have insurance that are effectively footing the bill for that."

Indeed, Congress found families who do have insurance right now shell out on average $1,000 a year more than they would otherwise, in order to subsidize the health care costs of the uninsured. Put another way, when the uninsured show up at a hospital and are unable to pay, federal and state laws require those individuals to be treated, and the costs are passed on to those who are insured and to the taxpayers.

The government underscores the unpredictability of health needs by noting that one of the individuals who initially challenged the law in court, contending she didn't need insurance, ended up declaring bankruptcy, with thousands of dollars of unpaid medical bills.

Everyone agrees that the Constitution sets out a system of limited government powers, and most concede that the health care industry, which accounts for one-sixth of the national economy, can be controlled by Congress under its constitutional power to regulate interstate commerce. The question is whether the means chosen to do that — namely, the individual mandate — goes too far.

All of which leads to what has been termed "the broccoli question": Could the government force you to buy broccoli, or purchase a car or a flat-screen TV? Clement points to the Cash for Clunkers law as an example of an acceptable and direct government subsidy, as opposed to a mandated purchase.

"If what we were trying to do is prop up the automobile industry, which we clearly were, then it would have been much more effective to say, 'Look, if your adjusted gross income is more than $100,000, you must buy a car,' " Clement says.

He argues that Congress can legislate incentives to purchasing health insurance, but it can't mandate it.

Katyal replies that the auto industry simply can't be compared to the health industry, because not everyone will inevitably own or even drive a car. If the two industries did work the same way, he contends, you could "show up at the car lot, drive off with a car, and stick your bill to your neighbor." This latter scenario is "what's going on in the health insurance market."

"Look, if I don't buy a flat-screen television, and my team is playing for the national championship, I don't get to run into Best Buy and say, 'You gotta give me a flat screen television,' " Dellinger says. "But I do get to go to a hospital when I'm sick and have people provide me with services."

The challengers of the health care law, however, see the mandate as the ultimate threat to liberty.

"There is no limiting principle," says Carvin. "If Congress has the power to compel a purchase to serve the public welfare, to improve commerce, game over. They can do it for banks or car companies, anyone else they want."

Over the past three-quarters of a century, the Supreme Court has upheld a wide variety of federal mandates on individuals and businesses. For instance, civil rights laws have required hotels and restaurants to admit everyone regardless of race or ethnicity; drug laws have barred even terminally ill patients from having access to certain drugs; federal laws have imposed environmental restrictions on businesses and homeowners alike; and other federal laws have helped boost the wages and benefits of workers.

Indeed, the modern health insurance industry didn't exist until a 1954 federal law allowed employers to deduct the cost of health insurance, at the same time allowing employees to reap the benefits without paying taxes on them.

Listen Live At 8 p.m. Tonight: The Supreme Court has wrapped the second day of oral arguments on the fate of the health care law. Tune in tonight for news and analysis from NPR's Nina Totenberg, Julie Rovner, Ari Shapiro and more.