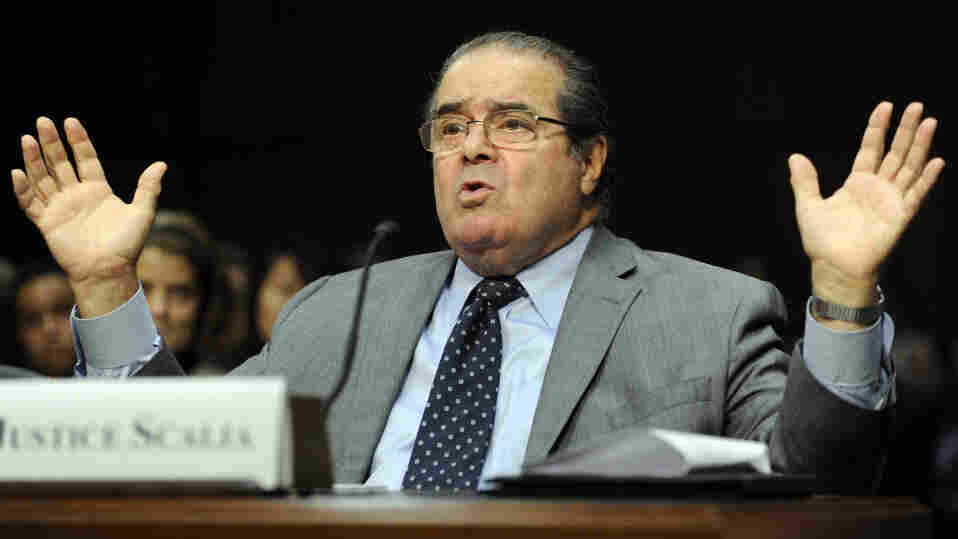 There are no cameras allowed in arguments at the U.S. Supreme Court, but Justice Antonin Scalia was captured on film when he testified before the Senate Judiciary Committee on Oct. 5, 2011. Roger L. Wollenberg/UPI/Landov hide caption 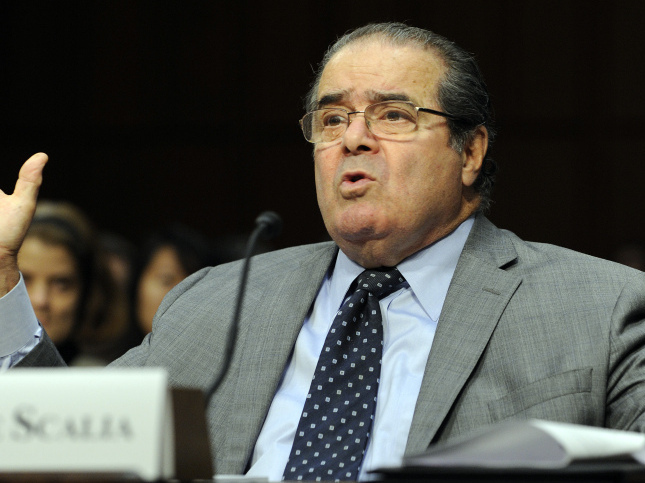 There are no cameras allowed in arguments at the U.S. Supreme Court, but Justice Antonin Scalia was captured on film when he testified before the Senate Judiciary Committee on Oct. 5, 2011.

On the final morning of its three-day health care law extravaganza, the U.S. Supreme Court wrestled with the question of whether parts of the 2010 federal statute can survive if the justices strike down its central tenet: the individual insurance requirement.

In other words, if the nine justices find the insurance mandate unconstitutional when they rule by June, would that mean that the entire law also fails the constitutionality test?

Wednesday's morning arguments were as spirited — and divided along ideological lines — as they were during Tuesday's session on the individual mandate.

The Cast: Arguing in favor of having the court strike down the entire law was Paul Clement, the former solicitor general, who also argued Tuesday's case against the individual mandate. Edwin Kneedler, the deputy solicitor general, argued in favor of preserving parts of the law, as did H. Bartow Farr III, a veteran Supreme Court advocate.

And, as they did Tuesday, members of the court's conservative majority, — and Justice Antonin Scalia in particular — appeared supremely reluctant to allow the law, if gutted of the insurance mandate, to stand.

Scalia lived up to his reputation for being one of the court's most voluble and humorous members. He tore into the government's arguments with relish, and joined his conservative colleagues in fretting openly about how a surviving law would affect insurance companies' bottom line.

Scalia even mused about the politics of the U.S. Senate. His comments, at times biting, at times drawing laughter from the packed chamber, provide perhaps the best window into the arguments — and what the court's conservative majority might be thinking.

Here, then, are our top five Scalia moments from Wednesday morning's arguments:

Supreme Torture: On Kneedler's suggestion that justices pick parts of the bill that could survive, Scalia invoked the Eighth Amendment — the one prohibiting cruel and unusual punishment.

Scalia: Mr. Kneedler, what happened to the Eighth Amendment? You really want us to go through these 2,700 pages? (Laughter.) And do you really expect the court to do that? Or do you expect us to give this function to our law clerks? Is this not totally unrealistic? That we are going to go through this enormous bill item by item and decide each one?

Speaking His Language: Scalia challenged Farr's argument that when Congress said the insurance mandate was "essential" to the law, it meant "useful."

Scalia: Is there any dictionary that gives that definition of "essential"? It's very imaginative. Just give me one dictionary.

Farr: Well, but I think my point, Justice Scalia, is that they are not using it in the true dictionary sense.

Scalia: How do we know that? When people speak, I assume they are speaking English.

Deep Pockets: Scalia grew sarcastic about the math involved when Farr asserted that federal subsidies embedded in the health care law could help people afford premiums even without an individual mandate that would drive more people into the insurance market.

Scalia: And there is nothing about federal support that is unsustainable, right? That is infinite.

Political Realities: Scalia delved into the politics of Congress repealing the health care law if it survives without the individual insurance requirement.

Heart Of The Matter: Scalia wasn't shy about sharing his thoughts on whether parts of the law can survive without the mandate.

Update 4:34 p.m. Wednesday afternoon's arguments on Medicaid also yielded musings from Scalia about whether the government was making states "an offer you can't refuse" and whether "your life or your wife's" was a good example. "I could refuse that one," Scalia noted. Chief Justice John Roberts did not sound amused.