Accessibility links
Autism Rates Jump Again, As Diagnosis Improves : Shots - Health News The rapid rise in numbers has prompted calls to declare the developmental disorder an epidemic. But researchers say most if not all of the increase could be due to better recognition of the disorder by parents, doctors and teachers. 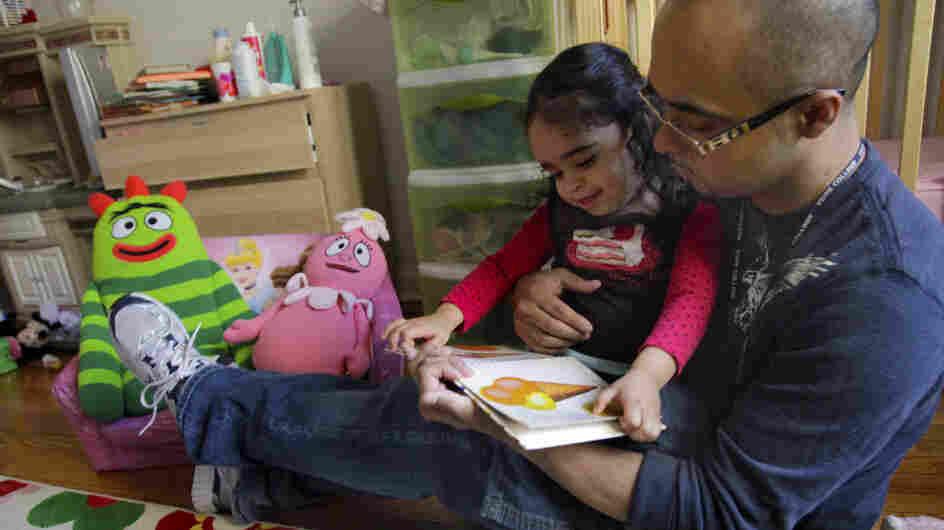 Christopher Astacio reads with his daughter Cristina, 2, recently diagnosed with a mild form of autism, in her New York bedroom on Wednesday. Bebeto Matthews/AP hide caption 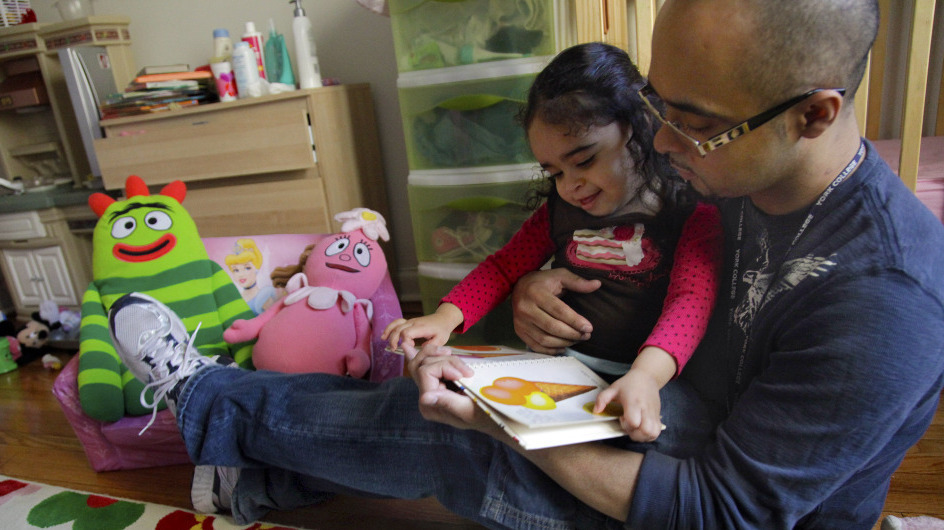 Christopher Astacio reads with his daughter Cristina, 2, recently diagnosed with a mild form of autism, in her New York bedroom on Wednesday.

The number of children diagnosed with autism jumped 23 percent between 2006 and 2008, according to the latest federal estimate.

Now, 1 in 88 children has been diagnosed with autism, according to figures from the Centers for Disease Control and Prevention.

The rapid rise prompted calls to declare the developmental disorder an epidemic. "This is a national emergency in need of a national plan," Mark Roithmayr, president of the advocacy group Autism Speaks, said at a CDC media briefing Thursday.

But CDC scientists weren't about to go that far. Instead, they said that most if not all of that startling increase could be due to better recognition of the disorder by parents, doctors and teachers.

"There is the possibility that the increase in cases is entirely the result of better detection," Dr. Thomas Frieden, head of the CDC, said at the briefing.

From 2002 to 2008, the number of children diagnosed with an autism spectrum disorder has risen 78 percent, according to this ongoing study, which tracks diagnoses among 8-year-olds in 14 states. It was published in the CDC's Morbidity and Mortality Weekly Report.

The survey counted not just children who had been given an official diagnosis of autism, but those whose school or medical records included descriptions of behavior typical of the disorder. Those methods have been consistent throughout the study.

Because there is no known cause for autism, the question of what's fueled the swift rise in diagnoses over the past 20 years has been a major point of contention between advocates and scientists.

"In very much respect to Dr. Frieden, only part of the increase is better diagnoses," Roithmayr said at the CDC today. "There is a great unknown. Something is going on here that we don't know."

Autism Speaks and other advocacy groups have long pressed the federal government to do more research on environmental causes of autism, including the unproven theory that childhood vaccines caused autism. Scientists have tended to focus on genetic causes of autism, and factors such as advanced parental age and premature birth, both of which increase a child's risk of autism.

Twenty-one percent of adults think autism is linked to vaccines, according to an NPR-Thomson Reuters poll conducted last August. That was at the same time that a review from the Institute of Medicine said vaccines don't cause autism.

The advocates and scientists do agree on one fact: Too many children miss out on an early diagnosis, which could lead help them get behavioral therapies early on, when they do the most good.

"At 4 years old, it's too late," Frieden said today. "We need to get this down to 18 months of age." The American Academy of Pediatrics recommends that pediatricians screen all children for autism at 18 months and 24 months.

"It's really important for parents who have concerns to bring them up," said pediatrician Susan Hyman, who spoke representing the AAP. "And it's important for them to be persistent. Any concern a parent has has to be taken seriously. Don't defer."

The soaring numbers of children being diagnosed also means soaring costs for school districts and insurers. Parents and advocacy groups have been pushing in Congress and state legislatures for better coverage of special education and health care for children with an autism diagnosis.

A survey released yesterday by Autism Speaks estimates that direct and indirect costs of caring for children with autism costs $126 billion a year. But that number is based on the 2006 estimate of prevalence, which is 1 in 110. Bump that up to 1 in 88, and the cost wouldl be $137 billion a year, Roithmayr said.

The disorder can be mild or severe, but it interferes with a person's ability to communicate and understand social cues. More seriously affected people are unable to speak.