Accessibility links
Take Your Dog To The Office And Stress Less : Shots - Health News Do you think you'd be less stressed out if you took your dog to work with you? Science agrees. Employees with dogs were less stressed out than their coworkers, new research finds. But it works only if the dog is polite. 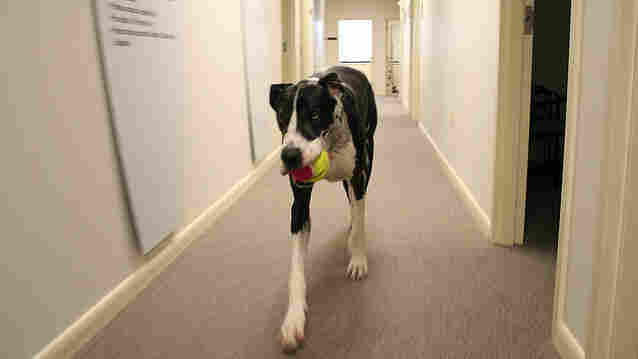 Patch, a Great Dane, has a memo for you. Brian Smith/Flickr hide caption

Any dog owner will tell you that they're a lot less stressed out when they're with their dog. Even at work. And now science agrees.

People who took their dogs to work in an office in Greensboro, N.C., had lower stress levels through the work day, as reported on self-reported test.

The employees who hadn't brought their dogs to work said their stress levels increased through the work day. So did the non-pet owners. But the dog owners said they stayed mellow as the day went on.

The researchers say that dogs in the workplace may help buffer work stress, and make the job more satisfying for non-dog owners, too. Their results were published in the International Journal of Workplace Health Management.

A quick poll here at Shots Central reveals that Scott Hensley and Julie Rovner would be far less stressed if their dogs were snoozing under their desks. Of course, they'd also be less stressed if they were outside tossing a ball with their dogs on this beautiful spring day, rather than boning up on health care policy.

This leads us dogless workers to wonder if workplace dogs function as an excuse to take a much needed break from work; a healthy version of stepping outside to take a smoke, or going to the vending machine.

That could well be true, according to Sandra Barker, a professor of psychiatry at Virginia Commonwealth University and one of the study researchers. During the week of the study, she saw people borrowing co-workers' dogs to go for a walk instead of sit in the cafeteria during breaks. "People may be getting more exercise," she told Shots.

The company that hosted the current study, Replacements LTD, is clearly pro-pet. They've allowed dogs in the office for the past 15 years. The average tenure for a worker there is 10 years, which is high in the industry, says Barker. But it's unknown if that worker satisfaction is dog-related.

This current study is hardly dispositive. It followed just 75 employees, paging them four times a day to report on their stress levels using a standardized quiz. And Barker and her co-author and husband, management professor Randolph Barker, are avowed dog lovers. So there may be some bias here.

But there is plenty of data that shows that interacting with pets can make people healthy, or healthier. Earlier this month, shameless pet partisan Julie Rovner reported on studies that found that petting one's dog lowers the owner's blood pressure, and that interacting with animals increases people's level of the hormone oxytocin. It's a neurotransmitter that's said to increase trust and reduce fear.

Barker speculates that workplace pets could be a low-cost intervention to keep employees happier and healthier. But this only works, she admits, if the dogs in question are friendly, clean, and well-behaved.

This raises the question of whether supervisors would have to vet pet behavior, and banish troublemaking pets. That sounds like a recipe for stress.