Caffeine Might Keep Moms Awake, But Not Their Babies

Caffeine Might Keep Moms Awake, But Not Their Babies 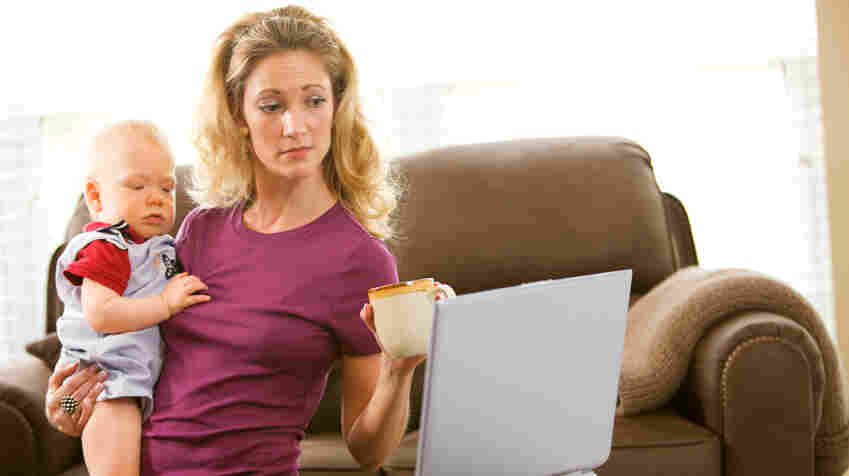 Mothers of new babies might be forgiven for turning to caffeine to get through those sleep-deprived months. And they might worry that drinking coffee interferes with the sleep of breast-fed babies — the Web is full of such questions. But a new study says it's not so.

Instead, researchers in Brazil found that the babies of heavy coffee drinkers were no more likely to wake up than were babies whose moms didn't have a serious espresso habit.

Crying and colic at 3 months old, as well as frequent night waking at 12 months, were not affected by a mom's caffeine intake.

"When we planned the study, we worked with the hypothesis of association between heavy maternal consumption of caffeine and higher infant awakenings at night," Marlos Rodrigues Domingues, a researcher at Brazil's Universidade Federal de Pelotas and co-author of the study, tells Shots in an email.

It's not clear why the infants' sleep wasn't affected. The babies might have developed a tolerance to caffeine while in the womb, Rodrigues says. But other studies have found no caffeine metabolites in the urine of babies whose mothers drink coffee, suggesting that the babies don't absorb caffeine the way older children and adults do. The results were published in the journal Pediatrics.

The researchers tracked 885 babies born in 2004. All but one of the mothers consumed caffeine, either in coffee or in the herbal drink mate, which is popular in South America. And 20 percent of those women drank a lot of coffee — more than 300 mg a day of caffeine, or about six espressos.

About 14 percent of the babies awoke more than three times a night, and 41 percent woke up at least once a night. Caffeine or no, it seems likely that babies will wake up when they want to. "Night waking is common throughout the first year of life," Rodrigues says.

So moms, drink that coffee if it helps, because it doesn't seem to be harming the baby at naptime.

That leaves the question of what helps get a baby to sleep in the first place. The Web is awash with questions and advice on that, too.

How often a child wakes is partly controlled by age, with older babies waking less often. But as any parent can tell you, a maddening number of factors seem to be involved, including daytime napping, breastfeeding, bed-sharing, being nursed to sleep, how responsive the parents are to a child's stirrings, and parents' own sleep habits.

Caffeine use by older children is much more controversial, given teenagers' interest in energy drinks and products such as inhalable caffeine.