Accessibility links
Just A Dirty Diaper, Or Worse? Smelly Urine May Mean Infection : Shots - Health News Foul-smelling urine in a very young child who is fussy or feverish could point to a urinary tract infection, a study by Canadian doctors finds. This might help doctors decide whether to collect a urine sample, when doing so might require an invasive procedure. 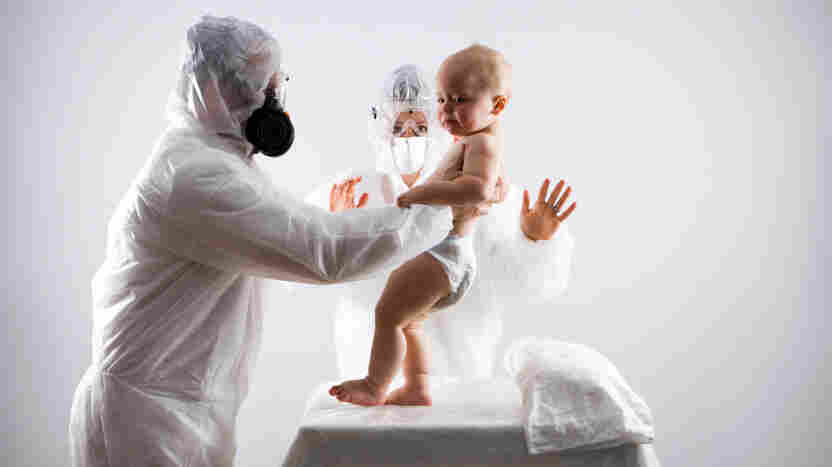 Stinky urine in a feverish child should be a red flag for doctors. Swilmor/iStockphoto.com hide caption

If you've spent any time around very young children, you know they can sometimes be pretty stinky. But particularly pungent urine in a child who is fussy or feverish could be a sign of infection.

Urinary tract infections are common in kids, leading to more than 1 million visits to pediatricians' offices each year in the U.S. Bacteria or other microbes enter the body and can infect the urethra (urethritis), bladder (cystitis) and kidneys (pyelonephritis). Antibiotics knock out most cases, though serious infections may cause kidney scarring or blood poisoning if not treated.

So it's important to diagnose quickly, which can be difficult to do in children younger than 3. The symptoms — unexplained fever, irritability or vomiting — aren't all that specific, and collecting a reliable urine sample usually involves a catheter, which is invasive.

Reports of stinky urine in a feverish child should be another red flag for doctors, according to a newly published study by Canadian researchers in Pediatrics.

"If the child has fever and at the same time his urine smells stronger than usual, the risk of having a urine infection is a little bit increased compared to a child not having smelly urine," Dr. Marie Gauthier, a pediatrician at Sainte-Justine University Hospital Center in Montreal, tells Shots.

She and her fellow researchers studied 331 children ranging in age from 1 month to 3 years old who were brought into Sainte-Justine's emergency room and had a urine culture because doctors suspected infection. Parents were asked to complete an eight-question survey, including two questions about whether their child's urine smelled stronger than normal or offensive.

Parents mentioned malodorous pee in 57 percent of the 51 kids diagnosed with a urinary tract infection and in 32 percent of the 280 children who didn't have infection, according to the Pediatrics report.

Gauthier says the foul odor may be due to the production of ammonia from bacteria. While this is often cited as a symptom of urinary tract infection, previous studies have been contradictory.

She emphasizes that the latest findings are mostly something for doctors to think about, not parents.

Stinky pee accompanied by fever increases the likelihood of infection — but the association isn't strong enough to make a diagnosis one way or the other, Gauthier says. Still, the presence of another risk factor might help doctors decide whether to collect urine from a child when doing so might require invasive measures.

"I think that most of us do not ask parents this question when we assess a young child in the ER for unexplained fever," says Gauthier, who also teaches at the University of Montreal's Department of Pediatrics. "If the answer is yes, well, it's not necessarily a reason to do a urine test, but we should be a little bit more cautious."

Other things can also cause a funny smell. If a child hasn't eaten for 12 or 24 hours and has vomited and is a little dehydrated, it could cause a different or strong odor, she says. Certain foods such as asparagus can also produce a funky whiff.

So when should parents be concerned? Gauthier says if a young child has an unexplained fever for more than 24 hours, call the doctor.