Accessibility links
Mammograms May Lead To Breast Cancer 'Over-Diagnosis,' Study Finds : Shots - Health News Norwegian scientists say as many as 1 in every 4 cases of breast cancer doesn't need to be found because it would never have caused symptoms or death. They also question a fundamental justification of mammography: that it finds more cancers when they're early and more curable. 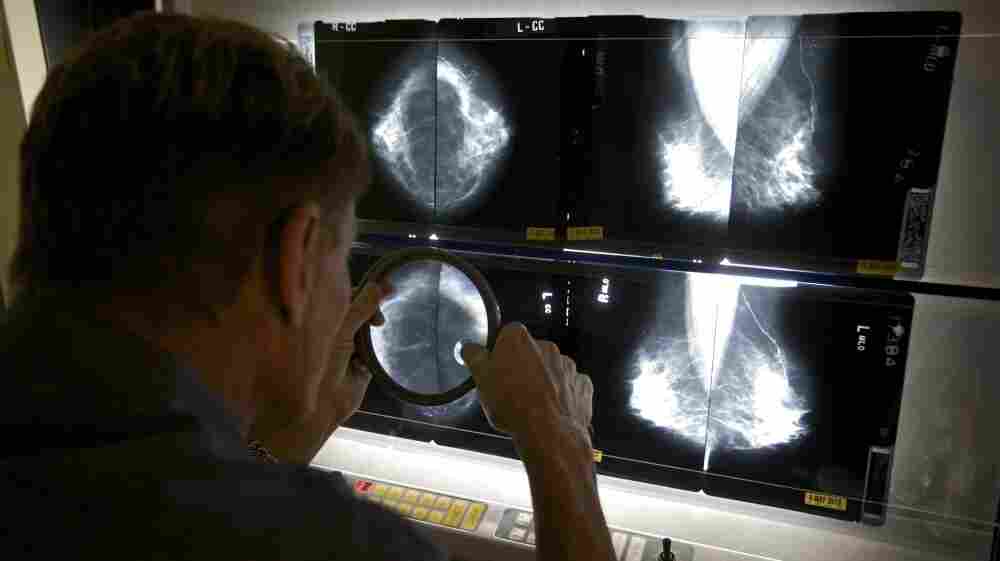 The problem of breast cancer overdiagnosis with mammograms is similar to the dilemma faced by men diagnosed with prostate cancer because of a PSA test. Damian Dovarganes/AP hide caption

Norwegian scientists say as many as 1 in every 4 cases of breast cancer doesn't need to be found because it would never have caused the woman any problem.

It's a startling idea for laypeople (and many doctors) thoroughly indoctrinated with the notion that any breast cancer is medically urgent — and should be found at the earliest possible moment.

But in fact, the study published in the Annals of Internal Medicine is not the first to suggest that breast cancer is often "over-diagnosed" through mammography screening. This is when a tumor is found that would never have gone on to cause symptoms or death.

A review of seven similar studies last year concluded that 30 percent of women who get a diagnosis of breast cancer through mammography screening represent "over-diagnosis and over-treatment."

The Norwegian study avoids certain problems with those earlier studies, some of which combined different forms of breast cancer. It took advantage of the fact that mammography was introduced into Norway's 19 counties in a staggered fashion over a nine-year period rather than all at once.

That allowed the researchers to compare the rate of breast cancers diagnosed through mammograms and those found because a tumor was palpable or produced symptoms. Norway has data on virtually all women who get a diagnosis of breast cancer.

The study included nearly 40,000 women with invasive breast cancer but excluded those with a form called ductal carcinoma in situ. DCIS behaves differently, and study authors say it requires a separate analysis.

By comparing women who got mammograms and those who didn't at the same time – rather than at different time periods — the Norwegians were able to get around the fact that breast cancer incidence has changed over time. As in the U.S., breast cancer diagnoses went up when menopausal hormone therapy was widely used, and declined sharply when many women stopped using hormone replacement therapy.

This may be a tough sell for women with anxiety as a result of the 'watch-and-wait' approach, as well as for radiologists who do not want to miss any sign of disease and fear of malpractice lawsuits.

Dr. Joanne Elmore of the University of Washington and Dr. Suzanne Fletcher of Harvard, in an editorial

Under current practice, those women get biopsies and treatment for breast cancers that would never have been detected otherwise. Either the cancers would have grown very slowly or not at all and never caused symptoms, or women would have died from something else before their breast cancer was diagnosed.

The Norwegian study authors also questioned a fundamental justification of mammography screening: that it finds more cancers when they're early and more curable. There was a reduction in late-stage breast cancers after Norway implemented universal mammography screening — but it occurred both in women who had mammography and those who didn't.

"Therefore, our findings suggest that enhanced awareness is probably the reason for the reduction of late-stage cancer, not screening," they write. By "enhanced awareness," they mean that women and doctors were more alert to suspicious lumps.

The problem of breast cancer overdiagnosis is similar to the dilemma faced by men diagnosed with prostate cancer because of a PSA test. Many of those men have a cancer that is so slow-growing that it would never have been found otherwise, which is why the U.S. Preventive Services Task Force has proposed that routine PSA screening be abandoned.

The task force says most men whose prostate cancers were detected through screening are overdiagnosed.

The Norwegian study leaves open the difficult question of what should be done about breast cancer overdiagnosis.

For one thing, there's no chance that researchers will ever assign women randomly to get mammography screening or not, then follow both groups for the rest of their lives to see how many screened women got needless cancer diagnoses. For obvious ethical reasons, the researchers say, "such a trial will never be done."

And there's no way at present for doctors to tell which breast tumors never needed to be found.

Nevertheless, an editorial that accompanies the new study declares that it's "time to agree that any amount of over-diagnosis is serious and to start dealing with this issue now."

Maybe those who interpret mammograms should be more cautious about calling something abnormal, say the editorialists, Dr. Joanne Elmore of the University of Washington and Dr. Suzanne Fletcher of Harvard.

And maybe doctors should hold off performing a breast biopsy in some women with suspicious mammograms and instead evaluate them over time with repeat mammograms. "This may be a tough sell for women with anxiety as a result of the 'watch-and-wait' approach," Elmore and Fletcher admit, "as well as for radiologists who do not want to miss any sign of disease and fear of malpractice lawsuits."

But at least women should be made aware of the overdiagnosis problem, they say. Because the chances it will happen to an American woman are higher than in Norway. That's because U.S. women often start regular mammograms in their 40s, a decade earlier than in Norway. And U.S. radiologists are more likely to report any abnormality on a mammogram.