Accessibility links
FDA To Fund Controversial Research Foundation : Shots - Health News In 2007, Congress created a public-private foundation to support research of interest to the FDA. Critics said this amounted to a new way for industry groups to influence the agency's decisions, and any FDA funding for the foundation was blocked for years. That's about to change. 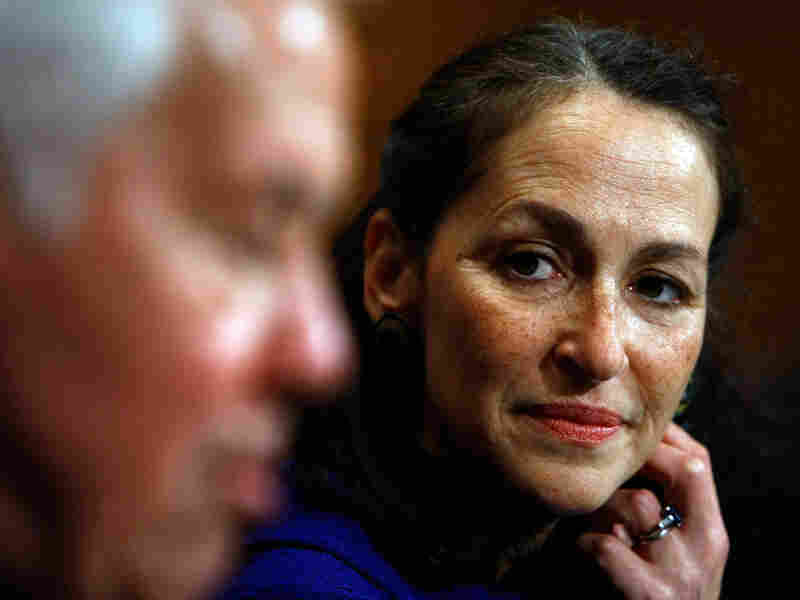 FDA Commissioner Margaret Hamburg says there is a desperate need to have the Reagan-Udall Foundation up and running. Win McNamee/Getty Images hide caption

A nonprofit foundation set up to support scientific research of interest to the Food and Drug Administration is finally starting to take off after years of struggling financially — and it's about to get some long-promised funding from the FDA.

But some critics worry that this foundation, which will also raise money from private sources including industry, could provide a way for the food and medical industries to sway FDA decisions.

The Reagan-Udall Foundation was created by Congress back in 2007. "The foundation was formed because of some bipartisan interest in supporting the scientific mission of the FDA," says Mark McClellan, who was commissioner of the FDA under President George W. Bush and who now heads the foundation's board of directors.

In many areas the FDA regulates, there are unanswered questions about what products are safe and effective and the best ways to figure that out. "And that's where the role of the foundation fits in," McClellan says.

The idea was that this foundation could do things the FDA can't. It would raise money from private sources, fund research in areas where the FDA lacks expertise, and organize collaborations involving industry, patient groups and academia.

But the foundation had a rough start. Some lawmakers were concerned industry groups could use this organization's work to influence the agency. And they blocked the FDA from giving the foundation any startup money.

There's been an enormous amount of research that shows us that funding influences decisions, and that's a problem.

"We had some folks in Congress who were concerned about potential conflicts of interest," says Jane Reese-Coulbourne, Reagan-Udall's executive director. "They were concerned about us getting started up and actually held up our funding that we were supposed to get from the FDA for a period of time."

During the first years, finances were dire. The foundation had no office or full-time staff. Board members, who had been selected to represent industry, patients, academia and health care providers, scraped together $64,000 in small donations from various medical groups and also donated money from their own pockets. Reese-Coulbourne worked as a contractor.

Then, in 2010, the board accepted a $150,000 grant from the PhRMA Foundation, a nonprofit funded by pharmaceutical companies.

Reagan-Udall has said in the past that grants for its core operating expenses would be accepted from the government, individual donors or other nonprofits — not from industry. Garry Neil, an executive at Johnson & Johnson who is chairman of the PhRMA Foundation's board of directors and also a member of Reagan-Udall's board, says it was fine for Reagan-Udall to take direct support from the PhRMA Foundation, which he pointed out was another nonprofit.

"It's a foundation, so the money originally came from industry. But it's now in the foundation, and it's a nonprofit philanthropic organization that funds high-quality, peer-reviewed science," Neil says.

There's an opportunity there for people to look at what we're doing, where we're getting money from, who's sitting at the table. They can look at the outcome of our projects and they can decide for themselves.

But people who worried from the beginning about industry's interest in Reagan-Udall don't buy that argument. Sidney Wolfe, a consumer advocate at Public Citizen, says the PhRMA Foundation might technically be a nonprofit, "but one can hardly expect that they're going to do things that are not in the interests of their funders."

"The FDA is already overly and dangerously influenced by the drug industry, the medical device industry, the food industry," says Wolfe, who points out the agency gets huge amounts of money in user fees from the companies that make the products the agency reviews.

The PhRMA Foundation grant kept Reagan-Udall going through its tough financial times. It allowed Reese-Coulbourne to be hired full time. Last year, the organization got its first grants to actually do scientific research projects.

For example, a million-dollar project funded by The Bill & Melinda Gates Foundation will look at how to best evaluate combinations of drug candidates for tuberculosis. Another study looks at the toxicity of cancer drugs.

What's more, political changes in Congress mean that Reagan-Udall is finally about to get some funding from the FDA.

"I see it as really an exciting opportunity and one that we really desperately need to have in place, to have it up and running," says FDA Commissioner Margaret Hamburg. "I think that we're already starting to see the benefits that it can offer."

One major project the foundation is planning will develop new methods to better monitor the safety of drugs after they've been approved and hit the market. The FDA wants to use large databases of anonymous medical records to search for signs a drug might be causing problems.

But Hamburg says there are still lots of questions about how exactly to use databases to do that. "All of that is work that is very ripe for the kinds of public-private partnerships that can be done out of the Reagan-Udall foundation," she says.

While other government agencies, such as the National Institutes of Health and the Centers for Disease Control and Prevention, also have foundations that support their work, some people say the FDA has to be especially careful about conflicts of interest.

"FDA makes regulatory decisions," says Francesca Grifo of the Union of Concerned Scientists. "The CDC and the NIH are research agencies. They are not the decision-makers for things that affect the day-to-day life of the public."

She says that if Reagan-Udall is going to take on things of interest to industry — like how to detect problems with drugs out there on the market — any research collaborations have to be set up very carefully.

"There's been an enormous amount of research that shows us that funding influences decisions, and that's a problem," Grifo says. "So I think Reagan-Udall needs to demonstrate, through its openness, that in fact there are processes in place that will protect the public good."

The Reagan-Udall Foundation says it has procedures set up to prevent conflicts of interest and has pledged full transparency.

But until recently, there's been little information available for the public. The foundation's website only went up at the end of March. The organization was supposed to be holding annual public meetings, according to its bylaws, but plans to hold its first in May.

Before, the foundation was still just getting started, Reese-Coulbourne says. From now on, she says, everyone — including critics — will be able to watch and see what gets done.

"There's an opportunity there for people to look at what we're doing, where we're getting money from, who's sitting at the table," Reese-Coulbourne says. "They can look at the outcome of our projects and they can decide for themselves. And I believe that in the end, they're going to be really happy that we're doing this."