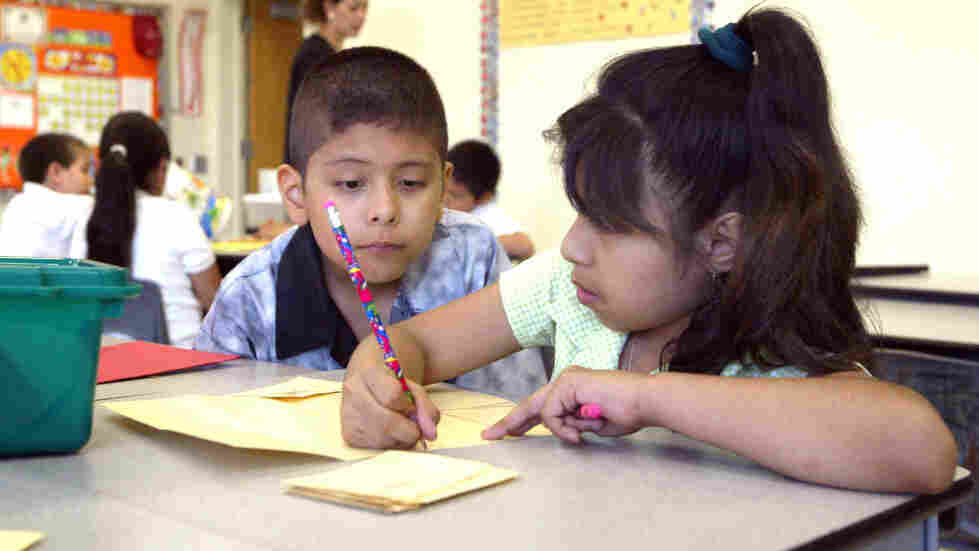 Because these Chicago second-graders are bilingual, they may be better protected later in life against the ravages of dementia. Tim Boyle/Getty Images hide caption

The brains of people who grow up speaking two languages are wired differently, and those differences protect them from dementia as they age.

That's the news from two studies out this month from a scientist in Canada who has spent decades trying to figure out whether being bilingual is bad or good. "I've been doing this for 25 years," Ellen Bialystok, a distinguished research professor of psychology at York University in Toronto, tells Shots. "Suddenly people are interested. I figure it's because everybody's scared about dementia."

Since about 20 percent of Americans are bilingual and as many as 60 percent of people in big cities like Los Angeles grew up speaking two languages, this is no small issue.

Not so long ago, it was thought that being bilingual was a disadvantage, because bilingual children have smaller vocabularies in both languages and are slower in word recall. But more recent research finds that bilingual children are better at "executive processing," which includes being able to pay attention, plan and organize thoughts.

That's the focus of one of the studies, which concludes that kids who grow up speaking two languages are better at switching between tasks than kids who spoke only one language. Researchers gave 104 children a common executive function test on a computer that asked them to sort images of either colors or animals on a computer screen. This "switching" task tests working memory and the ability to change from one rule to another.

The children who were bilingual in French, Chinese or Spanish were better at switching categories – in essence, multitasking. That may well be because they learn early on to toggle between the two sets of rules for English and their other language. Bialystok is one of the authors of this study published in the journal Child Development.

So does it do you any good when you're grown up? That's been a big question in research on the bilingual brain. The second recent study adds to growing evidence that being bilingual as a child helps a lot later in life.

It reviews the state of research on bilingual adults, and finds they maintain better executive functioning later in life than monolingual people. That extra "cognitive reserve" may allow the brain to better cope with the damage caused by dementia, thereby delaying symptoms. (Being physically and mentally active has also been shown to have cognitive benefits.) The article, also co-authored by Bialystock, is in the current issue of Trends in Cognitive Sciences.

But what about those of us who aren't bilingual? Are we doomed?

Still, bilinguals do have a natural advantage, she notes, because they can stay active and engaged without making a huge effort.