Accessibility links
More Fake Cancer Drugs Turn Up In The U.S. : Shots - Health News U.S. medical practices bought counterfeit medicine labeled as Altuzan from a foreign supplier, the FDA says. Altuzan, which is the Turkish brand name for the blockbuster drug Avastin, is approved for use in Turkey but not in this country.

More Fake Cancer Drugs Turn Up In The U.S.

More Fake Cancer Drugs Turn Up In The U.S. 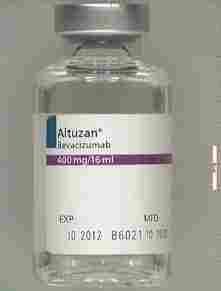 The FDA says so far it hasn't gotten any reports of patients receiving the fake Altuzan. U.S. Food And Drug Administration hide caption

Another batch of phony cancer drugs has made its way into the U.S., the Food and Drug Administration says.

U.S.-based medical practices purchased vials of counterfeit medicine labeled as Altuzan from a foreign supplier, FDA spokesperson Shelly Burgess tells Shots. She said the agency doesn't have any reports of patients having received the counterfeit drugs.

Altuzan is the Turkish brand name for Avastin, the FDA-approved blockbuster cancer drug from Swiss drugmaker Roche's Genentech unit. Altuzan is approved for use in Turkey — but not in the U.S.

The shipments came from Richards Pharma, a foreign supplier also known by the names Richards Services, Warwick Healthcare Solutions and Ban Dune Marketing, according to an FDA statement. Lab tests confirmed March 15 that the vials contained none of the active ingredient in Altuzan, Burgess says.

Packaging or vials found in the U.S. that claim to be Roche's Altuzan with lot number B6021 should be considered counterfeit, the FDA statement says.

As Richard Knox reported in Shots, counterfeit Avastin turned up in the U.S. in February. More than a dozen specialists in Illinois, California and Texas were thought to have bought it. Avastin, or bevacizumab, is approved to treat colorectal, lung, kidney and brain cancer.

Fake versions of diet drugs, the cholesterol drug Lipitor and the flu medication Tamiflu also have turned up in the U.S. in the past.

"In the past three months, we've notified health care providers about the risk of purchasing unapproved injectable cancer medications from unlicensed sources," Burgess says. "This is a practice that has to stop."

She says health care providers or patients who think they have received counterfeit drugs should report it to the FDA's MedWatch safety program.