Accessibility links
Fox In Socks! Dartmouth Names Its Medical School After Dr. Seuss : Shots - Health News No word yet on whether memorizing The Cat in the Hat will now become a requirement for medical school admission. 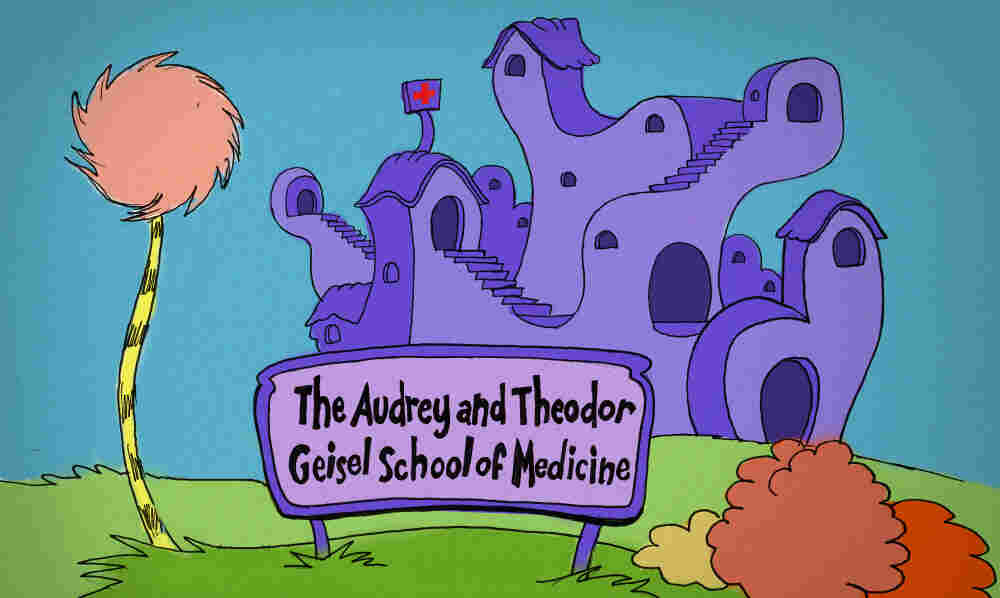 At the college of Dartmouth, in the year '24
There lived a young humorist named Theodor.
Though boozing was banned as a crime and a sin,
Theo hosted a party with plenty of gin.
But then in through the door without even a knock
Burst the grinch who stole gin-mas: Dean Craven Laycock.

The dean started shouting. His face turned bright red.
"Put down your tumbler and listen up, Ted!
I'm kicking you out of those clubs that you're in.
Your work won't be published at Dartmouth again!"

But Theodor just wouldn't take such abuse --
He published again — with the nom de plume Seuss!
Well, that name stuck. It's the one he would use
For Green Eggs and Oobleck and Horton and Whos.
Folks bought his books for their sons and their daughters
And Seuss sent the cash back to his alma mater.

Spring turned to summer and summer to autumn
(That whole gin episode was completely forgotten)
90 years passed. And then: a great honor
For Dartmouth's most famous, least medical doctor
They've renamed their medical school after him
And his wife! "It's a tribute," says President Kim*.

But I have a question (and maybe it's strange):
With this new name will the school itself change?
Will students write poems and skip their exams
Or learn to prescribe green eggs and green ham?
If your dear father's heart has come to a stop
Will your Dartmouth-trained doctor advise, "Hop on pop"?

Dr. Seuss — whose real name was Theodor Geisel (Dartmouth Class of 1925) — liked to share his wealth with his alma mater, where he edited the humor magazine, the Jack-O-Lantern, until he was caught drinking gin.

In return, this week the New Hampshire college officially renamed its medical school "The Audrey and Theodor Geisel School of Medicine" in honor of the author and his second wife, a nurse, who is the 90-year-old curator of her late husband's works. (Dr. Seuss died in 1991.)

"Naming our school of medicine in honor of Audrey and Ted Geisel is a tribute to two individuals whose work continues to change the world for the better," says Dartmouth President Jim Yong Kim. "Ted Geisel lived out the Dartmouth ethos of thinking differently and creatively to illuminate the world's challenges and the opportunities for understanding and surmounting them."

Although he had no medical training, Dr. Seuss did write one sort of medical tome. It was, in fact, one of his few books for adults, called You're Only Old Once. A book for "obsolete children," it tells the story (circa 1986) of one moderately aged patient's experience going through a physical at the Golden Years Clinic. In typical wry fashion, it touches on everything from an initial "Eyesight and Solvency" test to being "properly pilled and properly billed."

No word yet on whether memorizing The Cat in the Hat will now become a requirement for medical school admission.