Accessibility links
Wider Use Of Breast Cancer Radiation Technique Raises Concern : Shots - Health News The use of brachytherapy is gaining popularity, but some medical experts worry that not enough research has been done to make sure it works as well as the traditional approach to radiation. 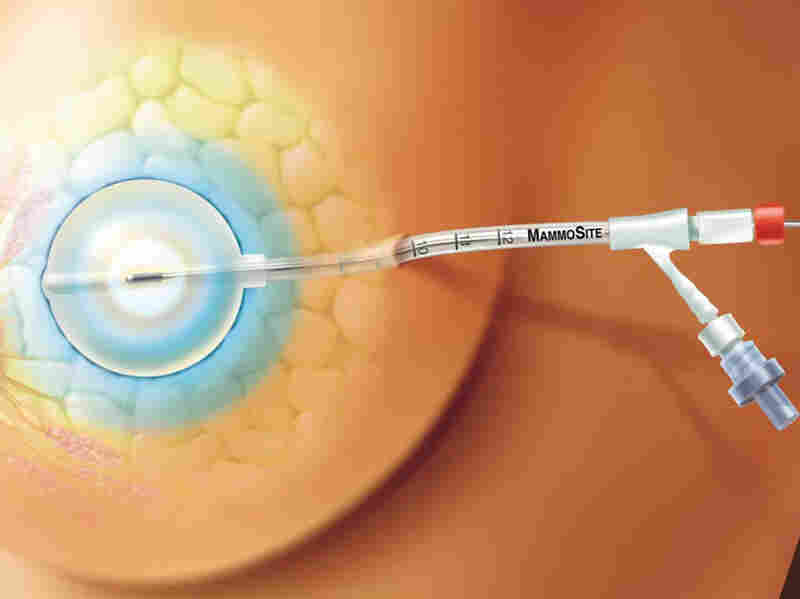 This illustration shows a device made by MammoSite used to deliver targeted doses of radiation as part of brachytherapy. Courtesy Radiological Society of North America hide caption

When Lisa Galloway was trying to decide what kind of radiation treatment to undergo after surgery for early breast cancer, she jumped at the chance to get a newer, quicker approach.

Instead of dragging on for weeks, the newer form of radiation, called brachytherapy, only takes five days.

But there's an intense debate under way about whether the approach is being used too widely before there's clear evidence it's as effective as the traditional approach.

"I see the rush to brachytherapy is somewhat inappropriate because it has not yet been proven in a randomized trial to be as effective as a standard treatment," says Bhadrasain Vikram of the National Cancer Institute.

To get ready for brachytherapy, a surgeon temporarily implants a small device called a catheter in the spot where the tumor was removed. The device houses a bundle of tiny, flexible tubes that protrude from the side of the breast.

For each treatment, a technician connects each of the tubes from the implant to a radiation machine. That allows the doctor to deliver high doses of radiation to specific spots inside the breast.

The radiation comes from a tiny pellet that's at the end of a very thin wire. One by one, the radiation-tipped wire snakes in and out of each tube in the implant. Patients get treated twice a day for 10 days. Each session takes a few minutes.

In recent years, the popularity of the therapy has soared, rising from less than 1 percent of patients in 2001 to 10 percent in 2006, Vikram says.

"It was a tenfold increase over a five-year period," he says.

Vikram worries that there's not enough proof yet that brachytherapy is as effective as what doctors have been using for years. And, he notes, there are some big concerns: "that the tumor will recur and women will need more mastectomies, and/or the tumor may spread to other parts of the body and kill the woman, or it may have more toxicity in the long term."

Those fears spiked in December when Benjamin Smith of the M.D. Anderson Cancer Center in Texas unveiled the results of a big study at a scientific meeting in San Antonio.

"We found that the decision of whether or not a patient was treated with brachytherapy or whole breast irradiation was the single most important predictor of whether they had a mastectomy within five years of their cancer diagnosis," Smith says.

Mastectomies were rare no matter what kind of radiation women got. But they were about twice as common among the women who got brachytherapy, Smith and his colleagues found. That's a red flag that brachytherapy might not be snuffing out the cancer as well, Smith says.

"The most plausible explanation for our data is that women treated with brachytherapy were at increased risk of having a recurrence of cancer in their breast," he says.

Smith and his colleagues also found that women getting brachytherapy were more likely to experience minor complications, such as infections and bleeding.

"When you put together significantly increased risk of a lot of different complications and a treatment that's slightly less effective potentially than whole breast irradiation, then you start to wonder, 'What is the role of this treatment? And have we adopted it too quickly before we really understand how to use it correctly?' " Smith says.

He and Vikram say women should get brachytherapy for breast cancer only as part of carefully designed studies.

Other doctors disagree. For one thing, they say the data Smith used are old, coming from when doctors were just starting to learn how to do brachytherapy for breast cancer. In addition, they argue, other studies indicate brachytherapy is effective, at least for some patients: mostly older women with very small tumors that haven't spread.

"We have data that shows that in appropriately selected patients that are treated with five-day treatment, the outcome is very good and the toxicity is very low," says Douglas Arthur of the American Brachytherapy Society.

In addition to being more convenient, the more targeted approach avoids some complications.

"Less radiation means less side effects. They don't get fatigue. They don't get the darkening, reddening, tenderness of the skin related to external beam radiation," says Martin Keisch of the University of Miami Hospital. "You don't get that with the internal radiation you are receiving with brachytherapy."

Galloway's doctor, Sheela Modin of Holy Cross Hospital in Silver Spring, acknowledges that there are still questions about brachytherapy.

"At this point, we're being very conservative, based on the data that's available right now. And in select patients, and they tend to be older women, that this is a reasonable approach," Modin says.

"I don't do everybody. It would only be someone who has early stage breast cancer," she says

For her part, Galloway wasn't crazy about walking around with the brachytherapy implant. And she says it was kind of weird to feel little jolts of vibration during the treatment. But she was relieved to get her radiation treatment over quickly.

"I'm very happy, yeah, very happy," says Galloway, who got the implant taken out after her final day of treatment.

A large federally funded study is trying to clarify the risks and benefits of brachytherapy for breast cancer. But the results won't be out for years.