Accessibility links
Calif.'s Prescription-Drug Monitoring System Feels Pain From Budget Cuts : Shots - Health News Dozens of states electronically track the prescriptions for powerful narcotics like Vicodin and OxyContin to root out pill-shopping patients and unscrupulous doctors. But in California, a relentless budget crisis is threatening that system and causing deep concern among doctors and law enforcement. 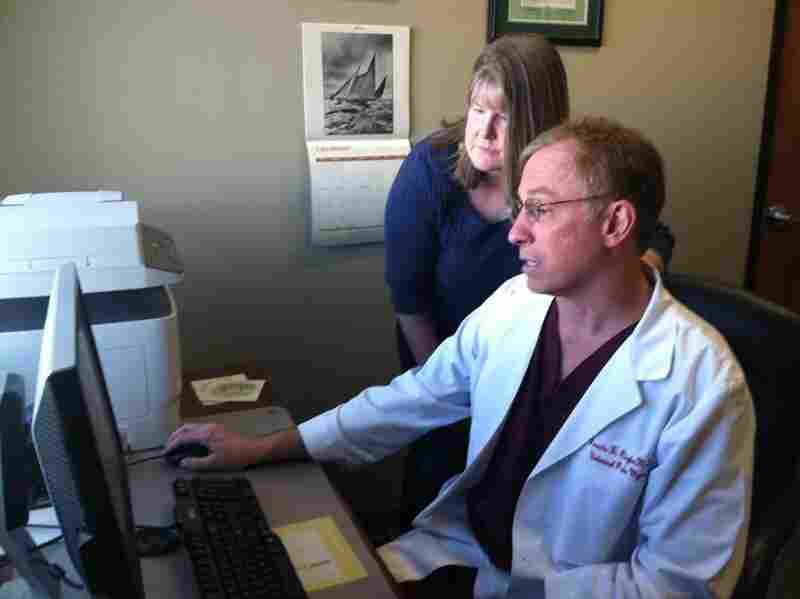 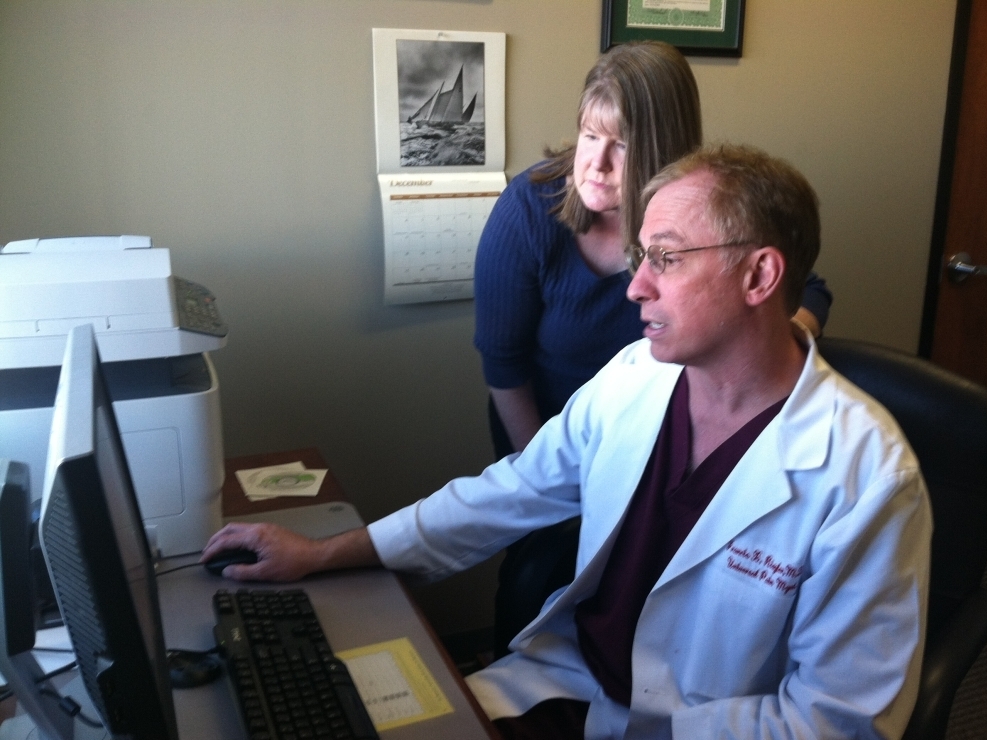 This is a story about what can happen when no one is looking. For the patients at Universal Pain Management, a medical clinic in northern Los Angeles County, Dr. Francis Riegler is always looking.

Riegler huddles with the clinic's nurse practitioner over a computer printout. The one-page report from the state's drug-tracking system shows that a patient was on the hunt for more Vicodin, a powerful pain reliever that he was already getting from Riegler's clinic.

California has the oldest continuous prescription-drug monitoring program in the U.S., dating to 1939. It used to rely on carbon copies: one for the pharmacy, one for the doctor and one to be sent to the state's Department of Justice. The system went online in 1998, and that's when its full power was realized. Now, Riegler and other physicians can log in and see which prescriptions their patients have filled anywhere in California.

"I think it's fair to say that we were able to weed out a significant number of people who were either abusing or diverting their medications or hording them where we simply had no idea," he says.

So alarm bells went off among doctors and law enforcement when California Gov. Jerry Brown announced last year that, for budget reasons, he was eliminating the Bureau of Narcotic Enforcement, which had long managed the prescription-drug monitoring program. Dr. Scott Fishman, chief of pain medicine at the University of California, Davis, is among those fearful that if California's system closes down, the Golden State could attract pill pushers from around the country.

"The rest of the country is developing prescription monitoring programs, not abandoning them," Fishman said.

Nonetheless, in January, the state laid off or transferred the nine people who operated the prescription database. Now there's a lone civil servant — Mike Small, program manager for the Law Enforcement Support Program — at the Department of Justice keeping it from going dark.

Can one person really keep a massive system — with 200 million entries — going? Small insists his one-man operation and the measures he has put in place are working for now.

"It's not going to become unusable," he says. "The system, the electronic system, has not faltered. It's been operating this entire time."

Small says there was a backlog, but he was able to catch up; several physicians confirmed that the database is up to date. But the program now relies solely on year-to-year grants from the state's medical and pharmacy boards. Small agrees that without a permanent source of funding, the future of California's prescription-drug monitoring program is unclear.

"Grant funding is an iffy thing," he says. "It doesn't promise a rock solid future and continuity, and that might perhaps be what some clients might be fearful of — is not DoJ and the program itself, but rather the state's commitment to funding this program."

The possibility that the nation's most populous state might stop tracking the sale of prescription drugs has not gone unnoticed by the federal Drug Enforcement Administration.

Mary McElderry, who oversees the federal government's prescription drug operations for the Los Angeles Field Division, says agents around the country rely on state-run monitoring programs to catch criminals who peddle OxyContin, Vicodin and Xanax, among other drugs.

"California, unfortunately, probably is the only one right now that's in danger of losing their drug-monitoring system, which would be devastating to us."

It could also be devastating for U.S. attorneys who rely on the database for evidence in criminal prosecutions. McElderry recounts the case of an Orange County, Calif., doctor who ran a cash-for-prescriptions business out of the local Starbucks. The doctor has been indicted on charges of drug distribution, and the database records are key to the prosecution's case.

Indeed, drug policymakers say what is ultimately needed is a national database. That would prevent sophisticated criminal networks that pay patients to get prescriptions and hand them over from simply moving across state lines to evade detection.

At Riegler's L.A. County clinic, the veteran pain specialist is getting ready to confront one of his patients who hasn't evaded detection. Riegler holds a computer printout, clear evidence that the patient he's seeing filled multiple Vicodin prescriptions written by another doctor.

Maybe there's an explanation, Riegler says. Then he sighs, and goes looking for an answer from his patient.