Accessibility links
Vaccination Against Cholera Finally Begins In Haiti : Shots - Health News Today, 50,000 people living in the slums of Port-au-Prince will start to get immunized against the disease. This weekend, another 50,000 villagers in the low rice-growing areas of the Artibonite River valley will get their first doses of an oral cholera vaccine. All told, though, the immunization will cover only 1 percent of the Haitian population. 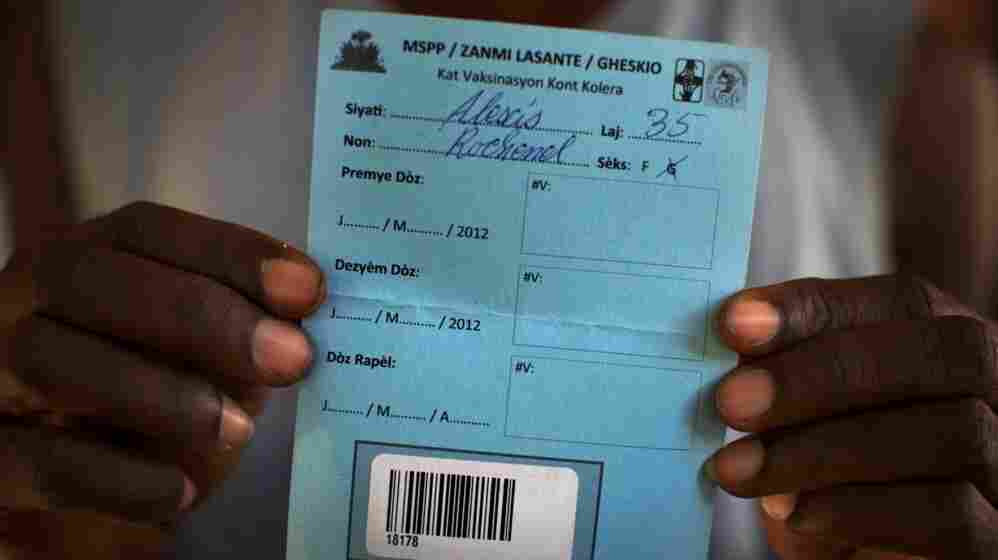 After myriad delays and setback, health workers in Haiti are beginning to vaccinate against cholera.

Today, 50,000 people living in the slums of Port-au-Prince will start to get immunized against the disease. This weekend, another 50,000 villagers in the low rice-growing areas of the Artibonite River valley will get their first doses of an oral cholera vaccine.

It's a pilot project that will involve only 1 percent of Haiti's population. The aim is to show that it's possible to give the required two doses over a two-week period to desperately poor and hard-to-reach people.

If it works, the plan is to convince the Haitian government, deep-pocketed donors and international health agencies to support a much bigger campaign to vaccinate millions of Haitians at highest risk of cholera.

Dr. Paul Farmer of Partners in Health, which is organizing the rural arm of the project, says he's already working on that more ambitious goal. "What I would hope for Haiti and for the Congo and other places with cholera," Farmer told Shots, "is that it's just a matter of political will and investment to ramp up vaccine production and build a global stockpile."

The Indian producer of Shanchol, the vaccine being used in Haiti, makes it only when agencies put in orders. So the pilot project in Haiti, which is using 200,000 doses at a cost of around $400,000, is using up almost all the current world supply of the vaccine.

Dr. Jean William Pape, who heads a Haitian group called GHESKIO that's doing the Port-au-Prince part of the current campaign, thinks vaccine could blunt the impact of cholera in Haiti in the near term. 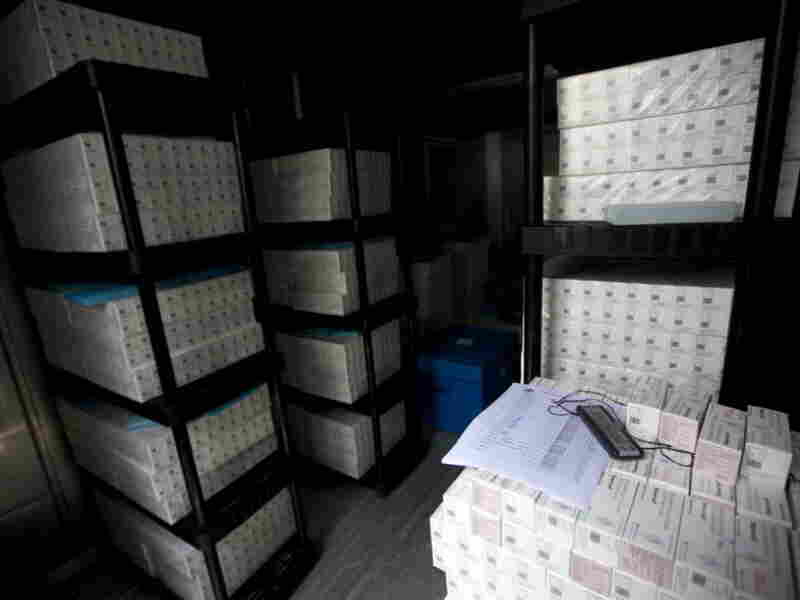 Thousands of doses of cholera vaccine sit in a refrigerated trailer in a United Nations compound in Saint-Marc, Haiti. John Poole/NPR hide caption

"If we give this vaccine every three years to the at-risk population, we will see that the curve of those who are infected with cholera will decrease year after year," Pape told NPR. "I think that's what we should aim for."

It's been a long and twisted path toward what vaccination proponents consider an obvious response to one of the biggest cholera epidemics on record. Over the past 18 months, 530,000 Haitians have suffered from the fast-moving disease. Tens of thousands have been hospitalized. More than 7,000 have died.

Not until this week did cholera vaccination get the green light from Haiti's Ministry of Public Health and Population, after weeks of internal wrangling over the ethics of the project.

"The general culture around cholera vaccination in public health agencies has been that it's not a good idea. It's too complicated. It's too hard. It's costly," says Dr. Louise Ivers of Partners in Health. "That the Haitians can't even get measles coverage to be high enough. There's a kind of apathy about introducing another vaccine into such a place.

"Then there's the philosophical notion – an ideological argument that you shouldn't be trying to vaccinate against cholera when really the solution is water and sanitation," Ivers said in an interview.

Eight million Haitians lack potable water or proper sanitation, says GHESKIO's Pape. "So what are you going to do?" he asks. "In the best conditions, with the best government, it's not going to be done in five years. So you need this vaccine."

Over the past half-year, PAHO and the CDC have changed their stance to "cautious approval," as one of the involved parties puts it.

Dr. John Vertefeuille, the CDC's country director in Haiti, told NPR that the vaccination pilot project " will provide an important piece of information around the feasibility and acceptability of the vaccine."

He pointed out that "cholera vaccine's never been used in an ongoing outbreak situation with cholera."

Another important development was the World Health Organization's approval of the Shanchol vaccine last November as safe and effective. Shanchol is cheaper than the other cholera vaccine, called Dukoral, and it's easier to administer.

But changing attitudes at the international level didn't mean smooth sailing for the project within Haiti.

In early March, a Haitian radio station raised ethical questions about the project, charging that it was an "experiment" on the Haitian people that had not won approval by a national ethics committee.

That report apparently reflected charges made by a website that Haitians were to be used "as guinea pigs in a cholera vaccine trial."

The broadcast caught Haitian health officials by surprise. It also awakened the interest of the ethics panel, which had not yet acted upon a proposal submitted by Partners in Health and GHESKIO last year, before the WHO had approved Shanchol.

At the request of the health ministry, the groups hastily submitted updated proposals. But it wasn't until this week — six weeks beyond the hoped-for vaccination start date — that the ethics committee gave its approval.

That delay has caused a lot of anxiety. For one thing, Haiti's spring rainy season has begun — a time when flooding spreads cholera germs around, often directly into people's homes, and increases the contamination of drinking water.

Second, the delay has pushed the cholera vaccination campaign up against a long-planned national campaign to vaccinate children against measles, rubella, polio, rotavirus, Hemophilus influenzae and pneumonia.

Meanwhile, the Haitian government's support for the project seems firm. "This vaccine will be able to give us good protection," Dr. Gabriel Timothe, director-general of the health ministry, said in announcing approval of the project on Wednesday. He added that the project "will enable us to evaluate the operational cost" of cholera vaccination.

But the long-term objective, Timothe said, is "to eliminate the presence of cholera on the island of Hispaniola." And that will take massive investment in clean water and good sanitation.