Accessibility links
TEDMED Thursday: Sex, 'Poo Tea' And ALS : Shots - Health News An evacuation of the Kennedy Center first thing Thursday couldn't stop TEDMED. The big thinkers at the meeting heard about research to make better proteins in a hurry. And later there was an argument ini favor of allowing patients with terminal illnesses to take more risks with experimental treatments. 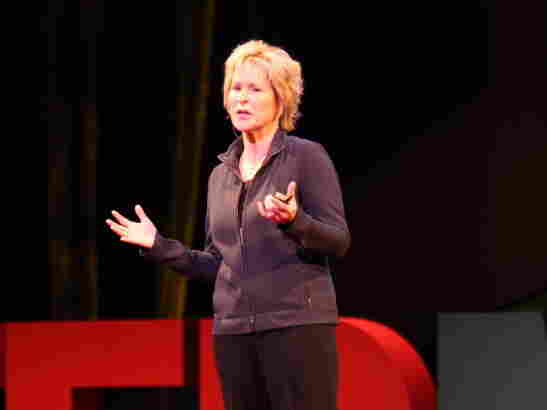 It takes more than a convoy of fire engines and an evacuation of the Kennedy Center first thing to stop TEDMED.

I heard conflicting reports about what happened this morning, but the show went on — a few minutes late — once D.C.'s bravest were satisfied we'd all be safe.

After a snappy tune from the @songadaymann (Jonathan Mann), Caltech's Frances Arnold made sure everyone was really awake by telling us what a blast her lab work is: "I have fun forcing molecules to have sex."

In nature, she said, "proteins aren't designed, they're evolved." That's where sex comes in to mix up genetic material. "Sex is an innovation-generation machine," she said.

And in the lab she's speeding that process up by shuffling genes artificially — and doing it smartly she hopes — by figuring out which elements have a fighting chance of producing proteins that actually work and maybe even do something useful.

Later on, I heard more than one person suggest that it would have been helpful to have a session on the risks and ethical implications of work like this.

In the afternoon, Emory's Jonathan Glass and Nick Boulis dove headfirst into the realm of risk, arguing that the current system of regulation is holding back progress in the search for treatments for amyotrophic lateral sclerosis. It's time, they say, for regulators such as the Food and Drug Administration to let patients take bigger risks when the alternative is looming death.

The researchers are interested in speeding up access to stem-cell treatments, even though both acknowledged there are big unanswered questions about their safety and effectiveness. But as Glass summed up, "This is an emergency. The house is on fire."

Finally, back to the morning session for one of the more provocative talks. University of California, Davis' Jonathan Eisen urged everyone to get to know their personal microbes: We're all colonized from head to toe. The mass of microbes each of us carries around, in fact, is greater than the mass of our brains, he said.

Some microbes help us, and others can hurt us. Miscommunication between our bodies and the microbes that live with us may make us sick. Fixing that snafu could make us well.

But we're only beginning to grasp how microbes affect human health. "We need a full field guide to microbes that live in and on us."