Accessibility links
Water In The Time Of Cholera: Haiti's Most Urgent Health Problem : Shots - Health News Life for most Haitians is a constant struggle for clean water. And now that cholera has invaded Haiti, safe drinking water has become Haiti's most urgent public health problem. The disease has killed more than 7,000 people since late 2010.

In the teeming city of Port-au-Prince, Haiti, millions of people have no reliable water supply.

Many of the underground pipes that did exist were ruptured by the 2010 earthquake. Many public water kiosks are dry.

So life for most people is a constant struggle for water. And now that cholera has invaded Haiti, safe drinking water has become Haiti's most urgent public health problem. Contaminated water is the main cause of cholera, which has sickened 530,000 Haitians since late 2010 and killed more than 7,000.

In Port-au-Prince, street vendors sell water in plastic baggies for a few pennies. Much of the city's water supply is trucked in by commercial vendors or a dwindling number of nongovernmental organizations that took on the task after the quake.

On one busy street corner, just outside one of the city's biggest slums, people with plastic buckets jostle to get to a length of garden hose that snakes out of a hole in the pavement — a source of free water.

A young woman named Marlene Lucien controls the hose. A self-appointed keeper of the peace, she tries to prevent fights from breaking out.

Is it safe water? "We are used to it," someone replies. "It's the water we use every day." But another person waiting in line says she does worry about cholera. "We are scared of it because it can kill you within hours," she says. But she has no choice; she has to drink whatever water she can get.

Haiti has never had the kind of water systems that developed nations take for granted. Chalk it up to decades of dysfunctional governments and unreliable international aid. Whatever the reasons, it's never happened. 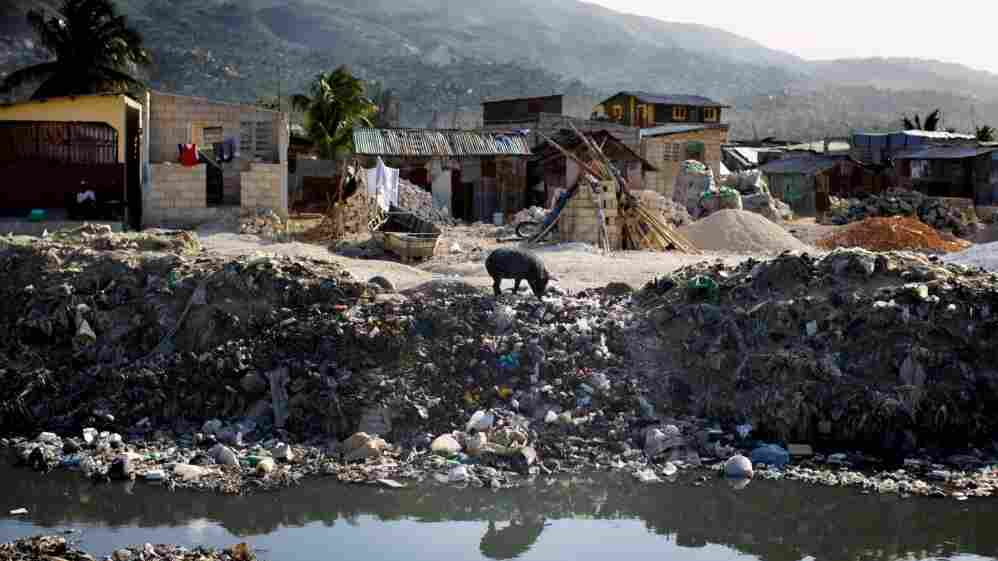 A lone pig roots through trash dumped over the side of a sewage canal that run from the center of Port au Prince through Cite de Dieu. During the rainy season, the canal overflows its banks and fills nearby houses with sewage. John W. Poole /NPR hide caption 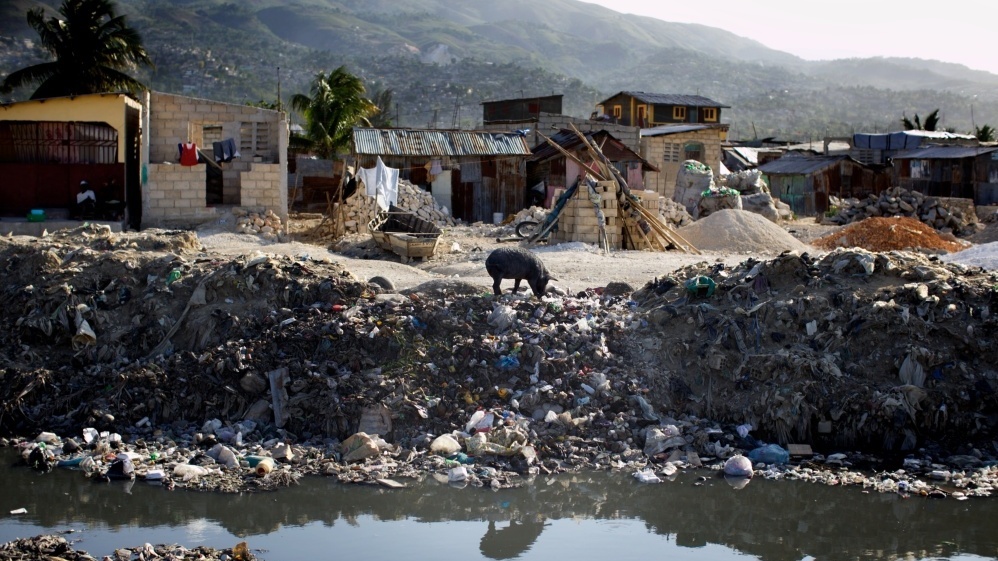 A lone pig roots through trash dumped over the side of a sewage canal that run from the center of Port au Prince through Cite de Dieu. During the rainy season, the canal overflows its banks and fills nearby houses with sewage.

In the countryside, clean water is even harder to come by.

In the tiny rice-growing village of Ballange, 50 miles north of Port-au-Prince, people have taken their water from the Artibonite River for generations. "They spent many years drinking it and they had never been sick," says Absolue Culberte, a community leader.

Then, 18 months ago, things changed. "Suddenly, [people] started being sick," Culburte says. "They were scared because they didn't know what was going on."

Cholera had entered the Artibonite River, Haiti's longest, 60 miles upstream — most likely from a leaky latrine at a United Nations camp for peacekeeping troops, who carried it from Nepal.

Many people in Ballange got sick, and some died.

Now, cholera is entrenched in the environment. With the coming of the spring rains, cholera cases are beginning to climb again in the Artibonite Valley.

But this spring, there's reason to hope it will skip over Ballange. That's because the village has a brand-new water treatment system. A U.S.-based charity called Water Missions International installed it, along with systems in a couple of dozen other villages.

Ballange is a bright spot in Haiti's quest for clean water. But a few miles upriver, in a village called Ote Dibison, there's a grimmer reality.

Another international aid group put in a similar water purifier in 2009. But it broke down just before the cholera outbreak.

Silencier Bonhomme, a member of the local water committee, says all it would take to fix the system is a couple of new batteries and a new pipe. But when villagers tried to reach the aid group, they didn't get a response.

"We don't have anyone who can fix it," Bonhomme says. "People now are using water from the river, and they get sick. We're getting close to two years since it broke down."

Other villages have the same problem. Water purifiers were put in, but they broke down, and villagers weren't able to fix them.

Nine years ago, the Haitian government built an elaborate water system there. It was designed to pump water from a pristine, protected stream to a hilltop reservoir and distribute it through pipes to the area. It was a big project, costing several hundred thousand dollars. A red government sign called it "a public treasure." 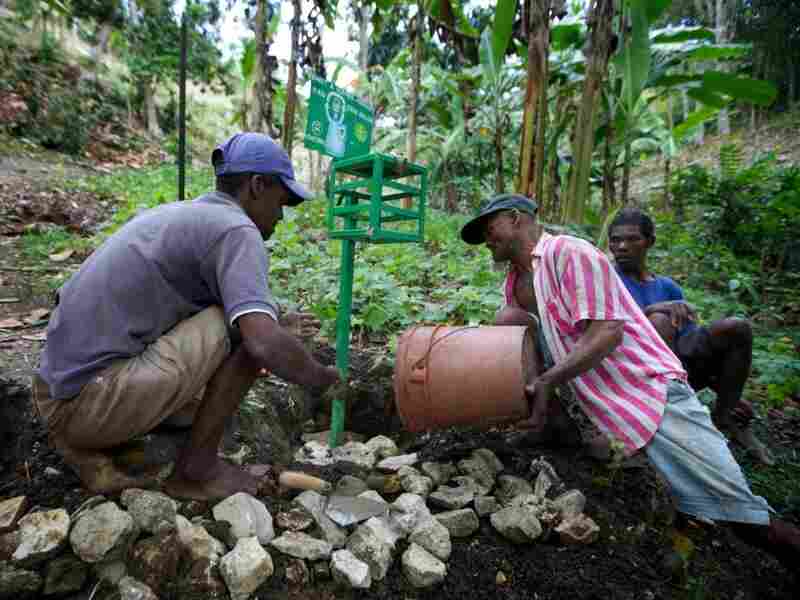 Men in the hillside village of Font de Liane in Haiti install a "chlorine box," a dispenser that adds just the right amount of chlorine to disinfect a five-gallon bucket of water. Cholera bacteria infect many streams in Haiti that people use for drinking, bathing and washing clothes. John Poole/NPR hide caption

But it hasn't functioned in more than two years. The pump failed. A truck reportedly drove over a pipe and crushed it. Local authorities couldn't scrape up the money to get it repaired. And it's unclear when the national government plans to fix it.

"It's a tragedy," says Kenny Rae of OxfamAmerica, "particularly in the middle of a cholera outbreak, when people have to now use water they take from the river. We've tested it. It's very, very contaminated."

So Oxfam is trying a simple, low-tech solution to provide clean water. The NGO is installing what they call "chlorine boxes" — green metal poles with dispensers on top. With a quick tap, it squirts just the right amount of chlorine to disinfect a 5-gallon bucket of water.

Soon there will be 90 chlorine boxes scattered around the surrounding villages, which get their water from sometimes-contaminated streams. "The cost of chlorine is very low," Rae says. "A $100 tub will cover all dispensers for six months."

When NPR visited, the hillside hamlet of Font de Liane was buzzing with excitement as a group of men dug holes and mixed cement to install two chlorine boxes.

"We were thirsty for something like this," says Jacob Labote, a schoolteacher who is chairman of the local water committee. "I believe that everybody will be using it."

This story was produced for broadcast by NPR's Jane Greenhalgh.

Note: After myriad delays, vaccinations against cholera finally began today. The program plans to vaccinate some 100,000 Haitians against the disease.