One in four women has had a migraine. And, it turns out, the debilitating headaches affect three times more women than men. 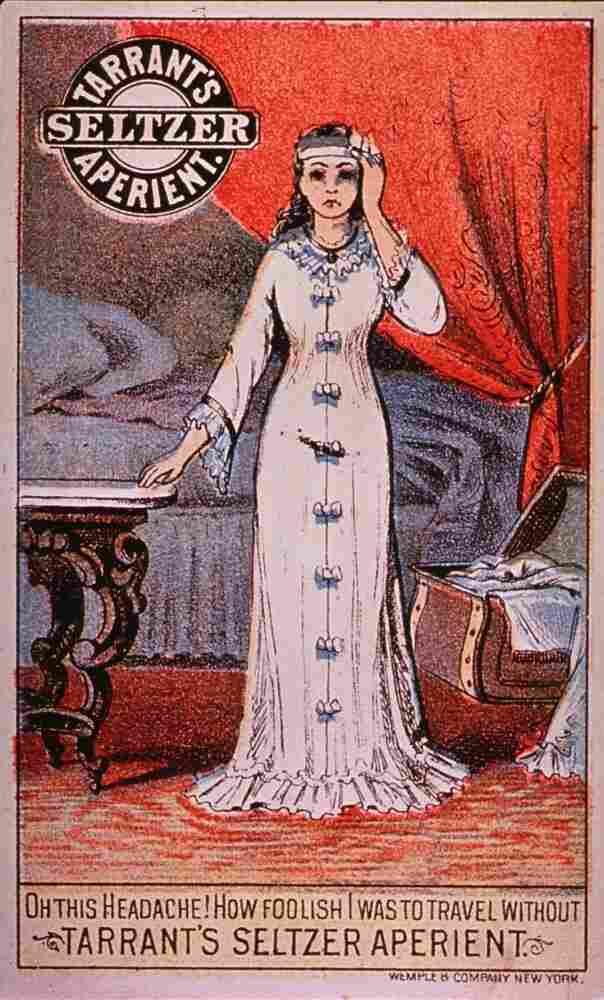 A vintage ad for a headache remedy plays to women. The National Library of Medicine hide caption

Decades ago, these headaches were attributed to women's inability to cope with stress, a sort of hysteria. Now experts are starting to figure out the factors that really make a difference.

Today scientists know a migraine is all in your head — but not in that old-fashioned sense. Migraines are biologically based, and they play themselves out as a wave of electrical activity traveling across the brain.

Dr. Andrew Charles directs the Headache Research and Treatment Program in the UCLA Department of Neurology. He describes what occurs during a migraine as a "spectacular neuro-physiological event" that involves bursts of electrical activity that start in the vision center of the brain. That, Charles says, is why the headaches include a "visual aura, those jagged lines or sparkling lights, that commonly occur in 20 to 30 percent of migraine patients."

The brain activity then travels like a wave across the landscape of the brain, moving into areas that control sensation. Patients feel numbness or tingling, like pins and needles. Then the wave hits the area that controls language, and, when that happens, Charles says, "it can cause dramatic difficulty finding words or garbling of speech."

Charles says the pounding pain of a migraine is believed to be generated from deep within the brain. Some scientists think the wave of activity triggers the pain. Others, including Charles, think pain occurs simultaneously with the electrical wave as it traverses the brain.

What triggers a migraine is nearly as complicated as the migraine itself. There are environmental changes like sounds, light, smells and movement. There are genes; migraine risk is hereditary.

But there is one major trigger, and this is why women have so many more migraines than men.

Neurologist Jan Lewis Brandes, founder of the Nashville Neuroscience Group, says migraines can be triggered by hormonal fluctuation. Migraines are slightly more common in boys than girls until girls begin menstruation. And once girls begin to menstruate, and hormones begin to fluctuate up and down, the number of their migraines increases dramatically.

A PET image of a migraine as it develops in the brain of a patient. Courtesy of the UCLA Headache Research and Treatment Program hide caption

The main culprit is estrogen, although researchers think other hormones may also be involved. But the uncertainty contributes to the difficulty of migraine treatment.

There are drugs to reduce the pain and length of a migraine. Others cut down on the frequency of attacks. But there isn't a cure. As many as half of all patients say treatment isn't effective for them. And nearly all say they'd happily try a new treatment if it became available.

That's exactly what UCLA's Charles is trying to come up with in a lab that's stuffed with microscopes, cameras, lasers, computers and a few mice. Charles points to one mouse, under anesthesia, lying on its stomach under a scanner that tracks changes in brain activity after stimulation with a caffeine-like substance. Caffeine can trigger migraines in humans.

Finding effective treatment to reduce the number of attacks is critically important, says Charles, because "migraines beget migraines." The more of them you have, the more vulnerable you become to having another.

And that lends urgency to finding a way to reduce how often the headaches strike. "We've begun to see from researchers that the frequency of migraine attack is linked to permanent changes in the brain, and I think that changes the playing field for patients and those of us who take care" of them, Brandes says. "We really need to think carefully about how to control the frequency of attacks and really need to do it earlier rather than later."