Accessibility links
Exercising Even A Little Bit Makes It Easier For Smokers To Quit : Shots - Health News Smokers who exercised just a little bit had an easier time quitting and were less likely to relapse, new research says. Even smokers who can't quit are less likely to die if they walk 15 minutes a day. 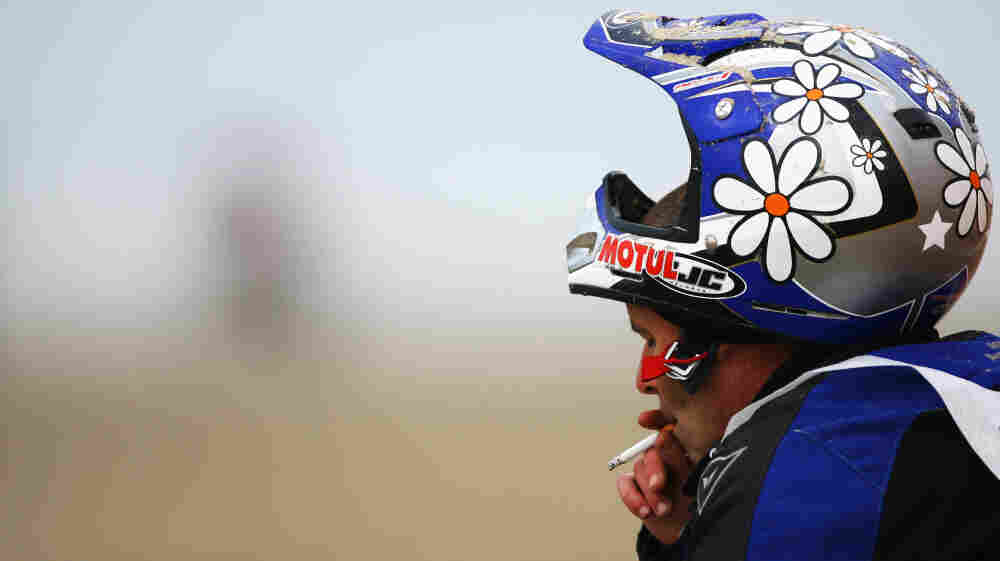 A competitor stops for a cigarette after he broke down during the Enduropale race at Le Touquet Beach on February 22, 2009 in Le Touquet, France. Paul Gilham/Getty Images hide caption

Smoking is bad. Quitting smoking is hard. But exercising can make quitting easier, and make sliding back into smoking less likely.

That's the word from a big new study, which tracked the health and habits of 434,190 people in Taiwan from 1996 to 2008. Smokers who got just 15 minutes of exercise a day were 55 percent more likely to quit than were people who weren't active at all. And those active smokers were 43 percent less likely to relapse when they did quit.

"Our message is to quit and exercise — to do both is the best," says Chi Pang Wen, a professor at the National Health Research Institute and China Medical University Hospital in Taiwan, who presented the data at the World Congress of Cardiology meeting in Dubai.

"Trying to quit is a painful process," Wen told Shots by phone from Dubai. "That painful process creates a vacuum. This substitute, which is exercise, will distract the smokers from thinking every day about the need to smoke."

And smokers who can't quit are still better off if they're active. As little as 15 minutes of walking six days a week improves life expectancy in smokers, according to a an earlier study by Wen, published last year in The Lancet.

Smokers who were active 30 minutes a day increased their life expectancy by 3.7 years. That put them on a par with ex-smokers who got low levels of exercise.The big risks they're looking at here are heart attack, stroke, and cancer.

And ex-smokers were able to counteract the long-term ill effects of smoking with exercise, too x-smokers who exercised 30 minutes a day were able to increase their life expectancy by 5.6 years, on average, and reduce the risk of death by 43 percent. That put them at the same risk level as nonsmokers who were inactive.

Walking 15 minutes a day six days a week is enough to improve health among smokers, Wen says."We want smokers to do as much exercise as possible," he says. But that 15 minutes is way better than nothing.