Accessibility links
Nonprofit Hospitals Faulted For Stinginess With Charity Care : Shots - Health News Nonprofit hospitals pay no federal, state, or local taxes. In return, they are expected to offer a community benefit, including free and discounted care for low-income patients. But a study by the Congressional Budget Office found that, on average, not-for-profits are providing only slightly more uncompensated care than for-profit hospitals. 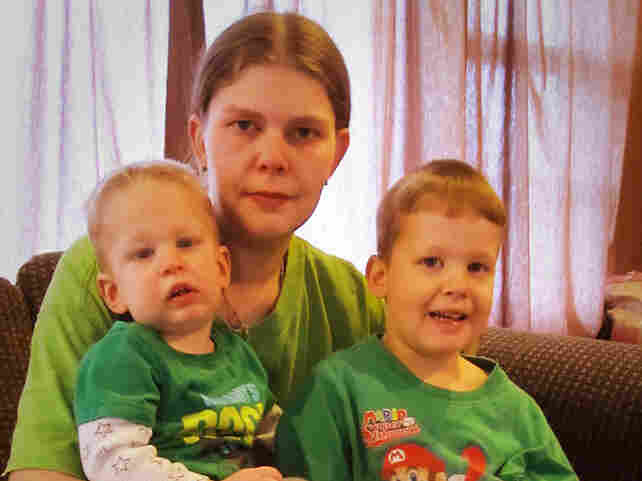 Even before the hospital bills started coming, Lori Duff and her family were living paycheck to paycheck. So when the debt collector called the Columbus, Ohio, mother and demanded $1,800 for the prenatal visits she'd had while pregnant with her third son, she panicked.

The collector claimed the local Catholic hospital Duff had gone to could garnish 25 percent of each of her paychecks to pay off the bill. She offered to make a $20 payment — all she could afford at the time — but the collector told her the minimum was $400 down. "I was like, 'I don't have that. You can have everything in my account right now. It's $1.25,'" Duff recalls.

Duff, 27, was likely eligible for free care under the Mount Carmel Health System's financial assistance policy, which offers medical care at no charge for patients earning less than 200 percent of the federal poverty level.

As a manager at an auto parts store, she earns about $25,000 a year. Husband Michael stays home with their three little boys, ages one, four and six. Her children are covered under Ohio's program for low-income kids, but both Duff and her husband are uninsured.

The health overhaul law of 2010 contains a number of provisions governing charity care. The new rules went into effect last year, and they will remain in effect if the Supreme Court upholds all or most of the health law. The rules mean non-profit hospitals are now:

She assumed her prenatal care would be provided free, either through an emergency Medicaid option offered to pregnant women or because of the hospital policy. But then, a few months after Henry was born, she started getting the letters and phone calls from the debt collector.

"When people start harassing you and they start calling on a daily basis or every other day demanding money you don't have, I mean, it's hard." She worried that the hospital might try to seize her paychecks or even take her house.

While Ohio has a law that prevents foreclosures based on medical debt alone, it is legal for hospitals to garnish patient wages, attach bank accounts and get a lien on any future earnings, including from the sale of a house.

Duff is one of nearly 1,600 people Mount Carmel sued in county court between 2009 and 2011. Most of them were patients like Duff who did not pay their medical bills, though not all were poor.

Karen Geisler, vice president of patient financial services at Mount Carmel, says the hospital's actions are appropriate. Mount Carmel processes 5,000-7,000 charity care applications each month, she says, and approves 90 percent of completed applications for some sort of aid from the hospital or state.

Nonprofit hospitals, including Mount Carmel, pay no federal, state or local taxes, giving them a competitive edge over their for-profit counterparts. In return, nonprofits are expected to offer a community benefit, including free and discounted care for low-income patients.

But despite the requirement, a study by the Congressional Budget Office found that on average, not-for-profits provide only slightly more uncompensated care than for-profit hospitals.

The federal health law passed last year attempts to address the situation by setting new rules for how a nonprofit hospital must report its charity care and serve poor patients. The rules have already gone into effect but are not being actively enforced.

Few patients who are sued by hospitals seek legal assistance, according to Kathleen McGarvey, a lawyer at Columbus Legal Aid, which currently represents six patients being sued by Mount Carmel.

She notes says that in these types of cases, the hospital usually wins by default, and the patient is accountable for the entirety of the bill, even if there are errors or duplicate charges. "I think for a nonprofit hospital, whose job it is to provide this community care, that it's obscene that they're going after folks who are at 100 percent of the poverty level," McGarvey charges.

Mount Carmel's mission is to provide care to everyone, regardless of their ability to pay, the system's Geisler says. "In order to provide charity in the community — and we provide a lot and do a lot of good — we have to collect payment from those who can afford to pay us," she says.

For the past decade, Republican Sen. Chuck Grassley of Iowa, has been leading the charge on Capitol Hill to hold nonprofit hospitals more accountable. Their tax exemption carries "certain responsibilities, and one of them is to provide charitable care. I mean, that's why they're set up, right?" Grassley said in an interview.

Under the new rules, crafted by Grassley and Sen. Max Baucus, a Montana Democrat, nonprofit hospitals are required to publicize their financial assistance policies and are prohibited from charging higher rates to uninsured patients or taking extreme collections efforts against patients who may qualify for free care.

"Historically, we haven't had the consistent definitions and agreed-upon standards for reporting," says Rich Umbdenstock, president of the American Hospital Association. "Now we have those at the federal level and we believe that those need to be given a chance to work."

Meanwhile, some states are taking matters into their own hands. In the past year, Illinois has revoked the state tax exemption for three nonprofit hospitals that the state Department of Revenue determined were not doing their share of free care.

Meanwhile, Lori Duff and her husband remain uninsured and vulnerable to future collections actions. "It's crazy," Duff says. "It's a hospital bill. It's a doctor bill. Everybody needs care."