Accessibility links
Robots Win Battle For Attention At Science Fair : Shots - Health News There were robots everywhere at the USA Science and Engineering Festival in Washington this past weekend. Robots shot baskets. There was a wheeled R2-D2 robot at the CIA's booth. And then there were surgical robots that let future doctors — and patients — try their hand at tasks requiring pinpoint accuracy. 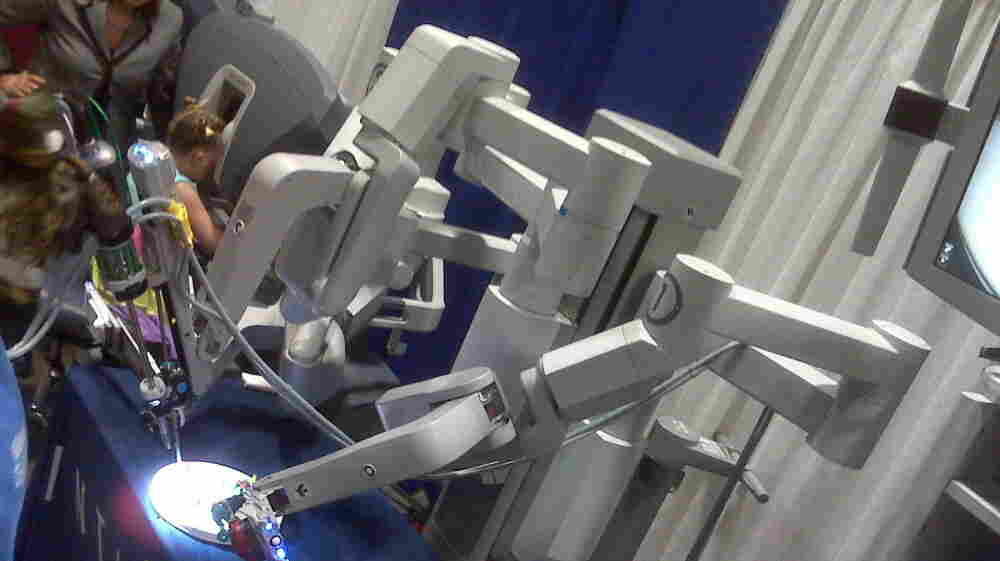 Budding scientists, engineers and doctors lined up to try surgical robots from Intuitive Surgical at a science festival in Washington, D.C., over the weekend. Scott Hensley/NPR hide caption 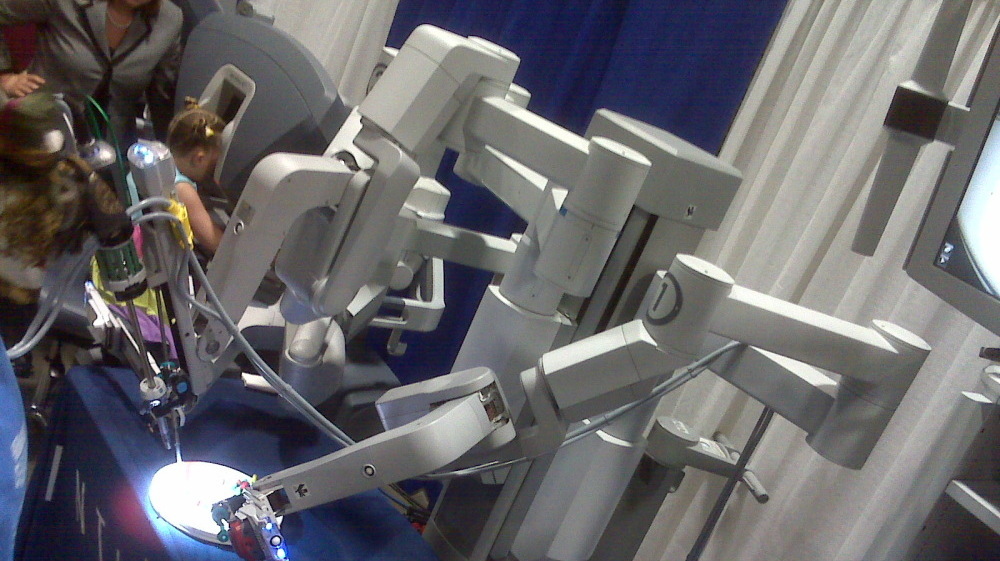 Budding scientists, engineers and doctors lined up to try surgical robots from Intuitive Surgical at a science festival in Washington, D.C., over the weekend.

A family visit to the USA Science and Engineering Festival in Washington this weekend drove that point home again and again.

There were robots everywhere. We saw robots designed by high-schoolers to shoot baskets. There was a wheeled R2-D2 robot at the CIA's booth, complete with the agency's logo on the wheels. And there were da Vinci surgical robots from Intuitive Surgical that let future doctors — and patients — try their hand at tasks requiring pinpoint accuracy.

Technology can be cool. And there's no denying that whiz-bang gizmos appeal to young minds brought up on video games.

But there's more to science than that. I didn't see a booth for a simple scalpel — or one for watchful waiting.

And that seemed like a shame. Yes, the festival's stated purpose is to "re-invigorate the interest of our nation's youth in science, technology, engineering and math" pretty much by any means possible. But often that favored the gaudiest gem.

To be sure, the National Academies took a crack at getting kids (and their parents) to think scientifically at Decisiontown, a make-believe place where people make logical choices about food, health and the environment. And the American Statistical Association got a lot of mileage out of a simple stepladder and toy parachutes. The closer your drop came to a bull's-eye on the floor, the bigger prize you could win.

But the lines were a lot longer at the booths with robots.

Less can be more in science. At the recent TEDMED meeting in Washington, Dr. Ivan Oransky (disclosure: a friend of mine) compared the practice of medicine to Moneyball, the book and movie about how the right stats can make all the difference in putting together a winning baseball team.

Doctors and patients shouldn't be expecting a home run from every test or treatment. Sometimes it's better to let a medical pitch go by without swinging.

But you need to know some stats to improve the odds of making the right choice. And I didn't hear any robots talking about that.

Now I succumb to dancing robots.